Ray Parks shines as Nagoya gets back on winning track 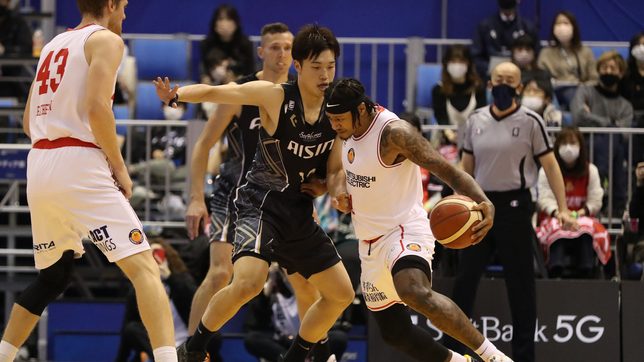 Facebook Twitter Copy URL
Copied
Ray Parks explodes for 23 points as the Nagoya Diamond Dolphins prevent the Seahorses Mikawa from completing a weekend sweep in the Japan B. League

Ray Parks Jr. and the Nagoya Diamond Dolphins returned to their winning ways after crushing the Seahorses Mikawa, 101-75, in the Japan B. League on Sunday, November 14 at the Wing Arena Kaiya.

After putting up just 4 points in their 91-79 loss to the Seahorses on Saturday, Parks rediscovered his shooting touch and exploded for a team-high 23 points on an efficient 8-of-15 shooting, along with 7 rebounds, and 2 assists as a starter.

“I just want to thank coach first of all for just giving me the opportunity to start,” said Parks. “We were down a couple of bodies but I had to step up for my big brother Coty Clarke.”

“We put out the win today collectively as a team and we fought hard,” he added.

Playing without their high-scoring import Clarke, the Diamond Dolphins came out with guns blazing and quickly built an early 15-point lead, 16-1, off a three-pointer by Parks with 2:56 left to play in the opening period.

The Diamond Dolphins never looked back as they managed to maintain their comfortable double-digit advantage, which rose to as many as 26 points, 94-68, with 1:54 remaining in the lopsided ball game.

Scott Eatherton backstopped Parks with a double-double of 21 points and 14 rebounds for the Diamond Dolphins, who improved to 8-6 in the standings.

Jarrod Uthoff topscored for the Seahorses in the losing cause with a game-high 24 points, while Yudai Nishida and Ryogo Sumino added 13 and 11 points, respectively.

Parks and the Diamond Dolphins will look to start another winning streak when they face the Shimane Susanoo Magic after the Division 1’s three-week break on Saturday, December 4 at 2:05 pm, Manila time.

Meanwhile in Division 2, Kemark Cariño and the Aomori Wat’s absorbed another lopsided 82-49 loss to the powerhouse Fighting Eagles Nagoya at the Maeda Arena.

Coming off a career-high 20 minutes of play on Saturday, Cariño suited up for 18 minutes in Aomori’s 33-point loss and tallied 5 points on 2-of-5 shooting and 3 rebounds off the bench.

The Wat’s will look to snap their painful seven-game losing skid when they take on the Sendai 89ers on Saturday, November 20 at 5 pm, Manila time. – Rappler.com