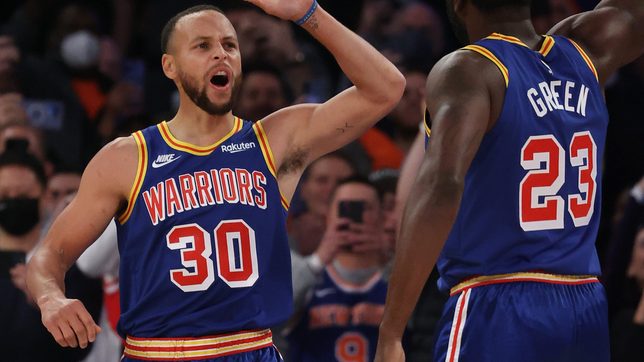 Curry entered the game needing just two three-pointers to break Ray Allen’s mark of 2,973 three-pointers and wasted no time making history. He drained two of his first three attempts, including the record-breaker – a 27-footer with 7:33 left in the opening quarter.

Curry finished the game 5-of-14 from beyond the arc as the Warriors won for the fourth time in five games to improve their NBA-best record to 23-5.

Julius Randle scored 31 points for the Knicks, who have lost four straight and seven of eight. Derrick Rose finished with 15 points, Alec Burks had 14, and Immanuel Quickley scored 12 off the bench.

Curry’s record-breaking three-pointer highlighted an otherwise quiet first quarter that ended with the score tied 24-24. The Knicks never trailed in the second quarter and entered the locker room with a 48-47 lead.

The teams were knotted twice in the third quarter before a three-point play by Poole gave the Warriors a 54-51 lead – their first advantage since going ahead 12-10 on Curry’s historic three-pointer.

There were two more ties and one more lead change before Wiggins’ free throw with 3:49 left put Golden State ahead for good at 60-59.

That began a quarter-ending 12-5 run for the Warriors, who took their first double-digit lead at 74-64 when Bjelica opened the fourth quarter with a three-pointer.

The visitors’ lead grew to as many as 11 before the Knicks scored seven straight points to pull within 81-77.

Damion Lee and Bjelica then hit layups on consecutive trips for Golden State, which led by as many as 12 down the stretch. – Rappler.com