FIL-AM COACH. Erik Spoelstra knows how passionate Filipinos are for the game of basketball.

Facebook Twitter Copy URL
Copied
'I had goosebumps when I found out the world championships will be there,' says Filipino-American Erik Spoelstra, who will coach Team Durant in the NBA All-Star Game

MANILA, Philippines – NBA All-Star coach Erik Spoelstra of the Miami Heat seems ecstatic at the thought of the Philippines’ becoming the basketball hub of the planet when it hosts the 2023 FIBA World Cup.

Speaking with the media during the 2022 NBA All-Star Weekend festivities in Cleveland, Ohio on Sunday, February 20 (Manila time), the Filipino-American Spoelstra was asked for his thoughts on what it will be like to potentially visit Manila again next year, this time as part of the Team USA coaching staff that will aim for gold in the tournament.

“We’re going out there, that’s one of the first things I heard about when they talked about this next segment for Team USA. We will be out there. I had goosebumps when I found out the world championships will be there. It will be fun,” the two-time NBA champion coach said.

Along with Indonesia and Japan, the Philippines was unanimously selected by FIBA Central Board in 2017 to host the upcoming World Cup, beating out the bid of Argentina and Uruguay. 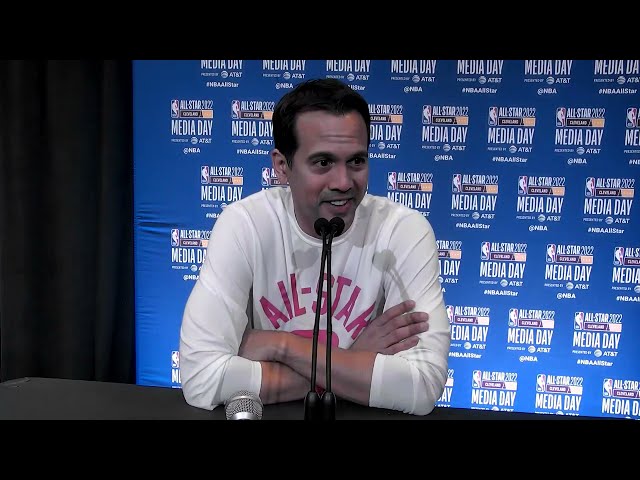 Spoelstra, who has acknowledged this reporter with the classic Filipino greeting of “Mabuhay!” during NBA post-game press conferences in the past, also detailed how he’s looking forward to everybody else knowing what he already does – that the love and passion Filipinos have for the game of basketball are immense.

“I am really grateful that everybody will be able to see Manila and just the enthusiasm worldwide for basketball. The fan base there is as good as anywhere in the world,” the 51-year-old tactician said.

“I’m just thrilled everybody’s going to be able to see that.”

The group phase of the World Cup will take place in the Philippines, Japan, and Indonesia, with Araneta Coliseum and Mall of Asia Arena serving as host venues.

Afterwards, the Philippine Arena in Bulacan is poised to host the final phase, including the World Cup final.

Spoelstra, whose Heat sit atop the Eastern Conference with a 38-21 record at the All-Star Break, will be the head coach of Team Durant in this year’s All-Star Game, opposite the Monty Williams-coached Team LeBron that also has Jimmy Butler, Miami’s lone player representative during the All-Star Weekend.

It’s the first time Spoelstra is coaching the All-Star Game since 2013, the last season Miami won an NBA title.

With nine years in between appearances, Spoelstra was reflective on how much time has elapsed since.

“Hopefully things are slowing down, and when I say slowing down, it’s from the standpoint that you can still be extremely focused and driven and your work ethic can be demanding, but you also want to be able to enjoy the ride,” he explained.

“It goes by so fast. I can’t believe that was nine years ago. It feels like yesterday. Sometimes that brings me so much joy, and sometimes it makes me sad, realizing these are different chapters, so I just want to be able to reflect and share these memories with great people and these relationships that you develop in locker rooms. They transcend just the team and the season that you’re in right there.”

Spoelstra coached the Eastern team in his last All-Star matchup, losing to their Western counterparts, 143-138.

While a win for the competitive head coach is always a goal, he also has other aspirations for this edition of the NBA’s annual midseason festivities.

“I look back on players and teams that I’ve coached, and they send me texts, and we exchange communication, and ultimately this is a bottom-line business, it’s about winning, but it’s about those relationships. It’s about shared experiences and memories. That’s what we’ll all take with us when we’re all retired and everything. I want to make the most of that.”

Perhaps Spoelstra will also cultivate new relationships when he visits a welcoming Philippines next year. – Rappler.com