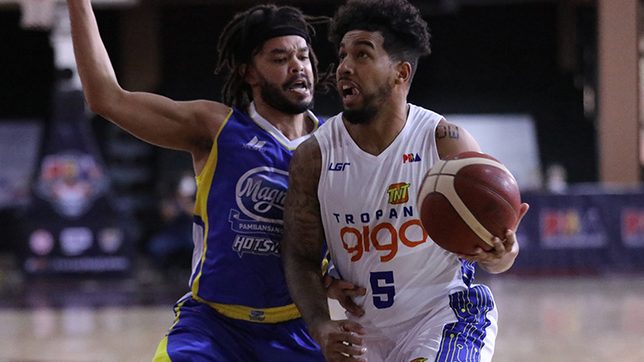 Williams scored a personal playoff-high 21 points on top of 10 rebounds, 5 assists, and 2 steals as TNT ran roughshod over Magnolia in Game 1 of the PBA Philippine Cup finals with an 88-70 win on Wednesday, October 20.

It was the third time the star rookie chalked up at least 20 points over the last six games after struggling from the field early in the playoffs.

Ending the elimination round with a second league-best 18.4 points, Williams saw his scoring production dip to just 10 points in his first three playoff games against Barangay Ginebra and San Miguel.

“[After] my up-and-down play in the San Miguel series, [I’m] just trying to come in and continue to assert myself as best as I can to help my team at the end of the day,” he added.

The vaunted Hotshots defense had no answer for the sweet-shooting Williams, who sank 5 of his 6 three-point attempts for a sizzling 83% clip.

Williams unloaded 4 triples in a 14-point masterclass in the second quarter as the Tropang Giga enjoyed a 53-34 advantage going into the break.

The No. 4 overall pick then sank his last triple in the third period that gave TNT its biggest lead of the game at 73-41.

“I just wanted to come in and be aggressive and just try to pick and choose my spots, just continue to do what I’ve done all year,” Williams said.

Williams, though, knows his Game 1 performance has put a bigger target on his back as he expects pesky Magnolia guards Mark Barroca and Jio Jalalon to make life a living hell for him in Game 2.

As much as he had his way against the Hotshots, Williams is displeased by the 4 turnovers he committed.

“I’m definitely going to get back to the drawing board and figure out things that I can do to kind of neutralize the pressure that they’re putting on us and just be more effective and just definitely take care of the ball,” he said.

“I had a couple of turnovers that I want to get back, so I just have to get back to the drawing board and keep working and figure out where I can go from there.” – Rappler.com