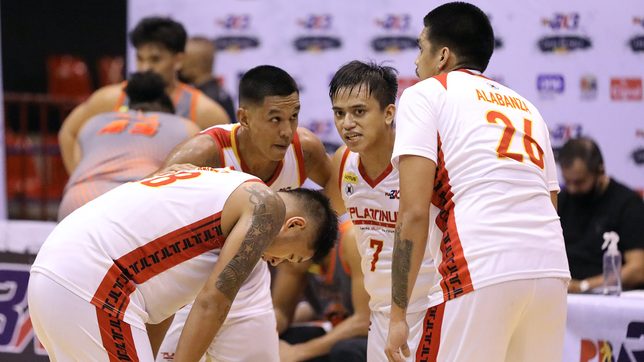 CONSISTENT. Platinum Karaoke advances to the knockout round of the PBA 3x3 for the fourth straight leg.

Platinum Karaoke punched its quarterfinal ticket in the fourth leg of PBA 3×3 after an unbeaten run in Day 1 at the Ynares Sports Arena in Pasig on Saturday, December 4.

Chris de Chavez shot the lights out and averaged 9 points as Platinum emerged as the only unbeaten team in Pool A following victories over the Cavitex Braves, Sista Super Sealers, and Limitless App Masters.

Platinum seeks to wrap up the pool stage perfect on Sunday, December 5, as it tangles with the hapless Zamboanga Valientes, who stayed winless through 15 games and bowed out of quarterfinal contention with a 0-3 slate.

Limitless (2-1), Cavitex (2-2), and Sista (1-2) vie for the last two knockout round berths up for grabs in Pool A, with the quarterfinalists to be determined by the result of the match between the App Masters and Super Sealers.

It was a rough day for Sista coming off its unbeaten title run in the third leg as it beat only Zamboanga.

Booted out of the quarterfinals after back-to-back finals appearance in the first two legs, Meralco regained its form after toppling Pioneer Pro Tibay, 21-17, and Barangay Ginebra, 21-16, to take the lead in Pool B with a 2-0 card.

The Bolts, however, have yet to clinch an outright quarterfinal berth as Pioneer (1-1) and the San Miguel Beermen (1-1) can still forge a three-way tie for the top spot in Pool B.

Even Pool B cellar-dweller Ginebra (0-2) has a shot at a quarterfinal spot.

Over in Pool C, the Terrafirma Dyip continued their inspired showing after a third-place finish in the third leg with a 2-0 record.

Cabrera, according to a TV broadcast report by Apple David, remained unconscious even after he underwent successful angioplasty following his collapse in the second leg on November 24.