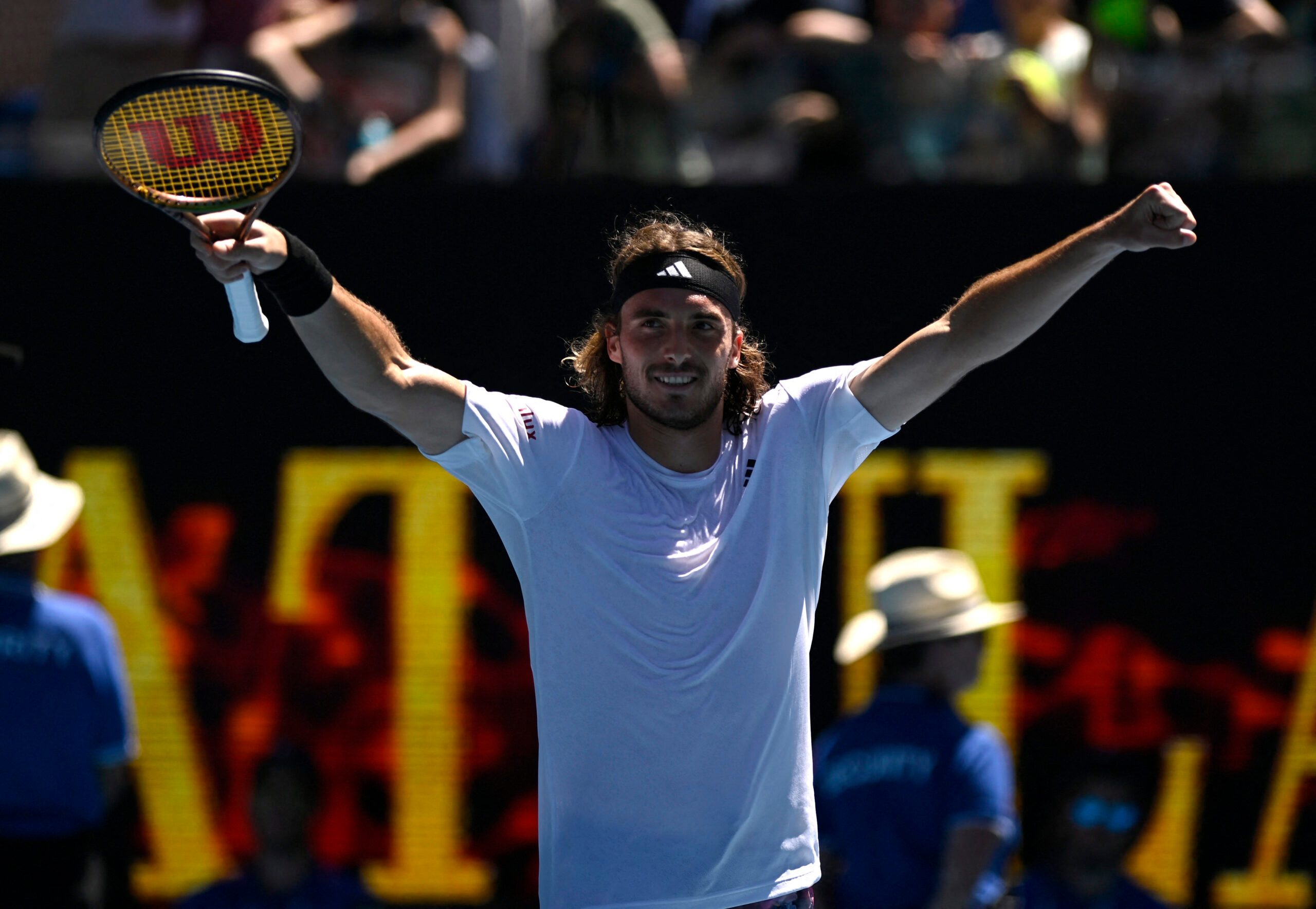 Facebook Twitter Copy URL
Copied
Stefanos Tsitsipas, the top surviving seed in the men's draw, has yet to drop a set in the tournament as he chases his maiden Grand Slam

MELBOURNE, Australia – Stefanos Tsitsipas and Iga Swiatek dazzled in bright sunshine to make short work of their third-round opponents on Friday, January 20, as some normalcy returned to the Australian Open after scheduling woes, wild weather, upsets and late finishes hogged the headlines.

Third seed Tsitsipas, the top surviving seed in the men’s draw, checked his phone after a 6-2, 7-6(5), 6-3 win over Dutchman Tallon Griekspoor and reflected on the beautiful day after hours of tennis were lost this week to the heat and stop-start rain.

“Fair crack of the whip mate, I mean, it was great,” Tsitsipas said, slipping into the local vernacular.

“I think my placement on the serve was exceptional today, I didn’t have a lot of rallies on my serve, which helped a lot.

“Kind of kept things clean and I enjoyed the weather today, what a lovely day for tennis it is today, isn’t it?”

Tsitsipas has still not dropped a set in the tournament as he chases his maiden Grand Slam, with his chances boosted by the exits of holder Rafa Nadal and second seed Casper Ruud and an injury cloud hanging over favorite Novak Djokovic.

But the 2021 French Open runner-up came close, saving a set point in the second set before doubling his advantage following a tiebreak to pave the way for a comfortable win to delight his supporters on Rod Laver Arena.

Roared on by Greek fans, many of them from Melbourne, which has the largest population of Greek speakers outside Greece and Cyprus, Tsitsipas will next take on Italian Jannik Sinner in what could be a tricky test.

Top seed and women’s favorite Swiatek was equally dominant in her 6-0, 6-1 victory over Cristina Bucsa as she bids to add to her two French Open wins and US Open crown.

“A couple of years ago when I was in the fourth round I was really exhausted, and right now I feel this is the right place to be,” Swiatek said.

Up next for Swiatek is Wimbledon champion Elena Rybakina who battled past last year’s Melbourne Park runner-up Danielle Collins, 6-2, 5-7, 6-2.

Jessica Pegula was also in a hurry to wrap up her match, as the third-seeded American swatted aside Marta Kostyuk, 6-0, 6-2, to make it seven straight victories in 2023 after a loss to Petra Kvitova in the United Cup.

Seventh seed Coco Gauff faltered on two matchpoints and then double-faulted before easing her nerves to save a breakpoint and dismiss left-hander Bernarda Pera, 6-3, 6-2, in a battle between Americans.

Nadal’s conqueror Mackenzie McDonald could not continue his run however, as the unseeded American fell to Japan’s Yoshihito Nishioka, who won 7-6(6), 6-3, 6-2, though fellow Americans Sebastian Korda and Frances Tiafoe are all in action later in the day.

No male US player has captured a Grand Slam title since Andy Roddick at the 2003 US Open, but the country’s hopes had been rekindled with eight players in the third round.

Organizers will hope the swift victories continue in the evening having defended their scheduling following a late finish to the previous day after former world No. 1 Andy Murray beat Thanasi Kokkinakis in a five-set epic.

That match finished at 4.05 am and Murray described the late finish as a “joke.”

“At this point there’s no need to change the schedule,” Tiley said. “We’ll always look at it, when we do the debrief – like we do every year.

“But at this point, at what it is, we’ve got to fit those matches in the 14 days, so you don’t have many options.”

Sinner provided the drama on an otherwise smooth day, as the Italian 15th seed overcame a poor start to his encounter against Marton Fucsovics losing the first two sets before outlasting his Hungarian opponent, 4-6, 4-6, 6-1, 6-2, 6-0.

The 15th seed is among the game’s brightest names having made the quarterfinals of all four Grand Slams without going further and showed his class in the last three sets playing superior tennis against a fading Fucsovics.

Former French Open winner Barbora Krejcikova, a quarterfinalist at Melbourne Park in 2022, also went safely through with a 6-2, 6-3 win over Anhelina Kalinina and meets Pegula.