Alex Eala has dominated the sports headlines after her scintillating title run in the US Open girls juniors.

Filipino fans have been awaiting the prospect of seeing the 5-foot-9 Alex eventually compete in the Women’s Tennis Association (WTA) circuit. At the rate she is going, it is not unlikely that the possibility of this happening may happen sooner than most people envisioned.

Get to know more about the country’s latest and youngest sports hero.

She did not just win the US Open juniors, she dominated

On her way to the US Open girls singles championship, Alex won six straight matches without dropping a set.

Seeded 10th in the main draw, she defeated three players who were ranked higher than her – eighth seed Taylah Preston in the third round, No. 9 Victoria Mboko of Canada in the semifinal, and second seed Lucie Havlickova of the Czech Republic in the title match.

Alex seemed to have a second gear when facing highly regarded opponents.

In the quarterfinal, she faced her doubles partner, 15-year-old Mirra Andreeva, considered one of the future stars of Russian tennis.

Andreeva, who upset top seed Sofia Costoulas of Belgium in three sets in the third round, had won one W25 event and two W15 events in the 2022 ITF circuit, making her the only player her age to win three pro titles in the same year. Alex took her down easily, 6-4, 6-0. 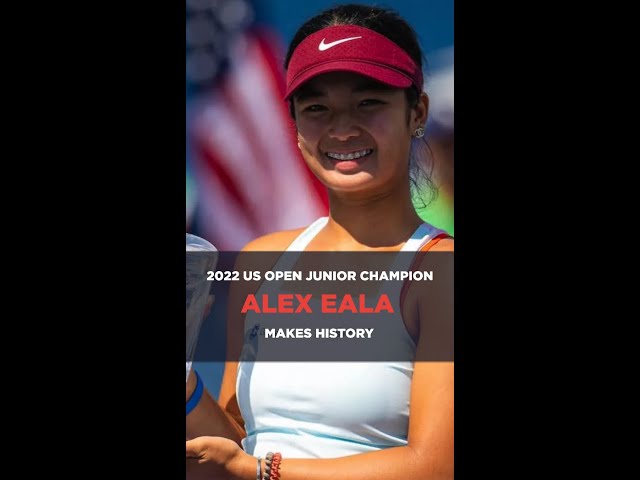 She has won junior Grand Slam events every year since 2020

In the last three years, Alex has made sure to add a junior Grand Slam trophy to her growing collection of silverware.

Alex made history in 2020 by becoming the youngest Filipino to win a junior Grand Slam doubles event. She was 14 years old when she and Priska Nugroho of Indonesia defeated Ziva Falkner of Slovenia and Matilda Mutavdzic of Great Britain in straight sets in the finals of the Australian Open girls doubles.

She starred for the Philippine team

In 2019, Alex led the Philippine under-14 girls team to its first appearance since 1993 in the ITF World Junior Tennis Championships after topping the Asia Oceania qualifiers, where they defeated Japan in the finals.

With Alex playing both singles and doubles in the World Junior Tennis held in Prosetejov, Czech Republic, Team Philippines ended up fifth in the competition, losing only twice to eventual finalists the USA and host team Czech Republic.

Her brother is also a standout tennis player

Alex is not the only outstanding tennis player in the Eala family. Her older brother Miko is one of the country’s most promising young talents.

Miko, who trained at the Rafa Nadal Academy in Manacor, Spain like Alex, is a junior at the Penn State University, which plays NCAA Division I tennis.

The 20-year-old Miko tested the waters of the pro tour in June but fell in the qualifying rounds of two ITF events in Vietnam. He finally cracked the main draw of the ITF M15 Monastir in Tunisia last July after winning all his qualifying matches in straight sets. He pulled off a shocker in the main draw when he stunned seventh seed Nicolas Tepmahc of France in the opening round before losing to eventual champion, 2021 Wimbledon boys doubles finalist Abedallah Shelbayh of Jordan.

Miko would go on to make the singles second round of the main draw the following week and the doubles quarterfinals twice in Monastir.

Their parents are Mike Eala and Rizza Maniego-Eala, who was a women’s 100m backstroke bronze medalist in the 1985 Southeast Asian Games.

She is the highest ranked Filipina tennis player in history

In the Women’s Tennis Association (WTA) world ranking, Alex sits at the 288th spot as of September 2022.

Alex reached a career-high ranking of 280th in August. This broke the 23-year-old Philippine record held by Maricris Fernandez-Gentz, who reached a peak of 284th in the world rankings in October 1999.

Alex is the youngest Filipino to win in the international pro tour. She earned her first singles title on January 2021 when at the age of 15, she won a W15 tournament in Manacor, Spain.

Fernandez-Gentz was 17 years old when she won her first ITF singles championships, while Filipina-German Katharina Lehnert was 18 when she became ITF champion.

A month before she turned 17, Alex won her second ITF singles title when she defeated former world No. 66 Luksika Kumkhum to cop the W25 Chiang Rai in Thailand last April.

Alex also finished runner-up in a W60 ITF Madrid event in June. In doubles, her best result thus far was a runner-up finish last year in the W25 ITF Platja d’Aro in Spain with Selekhmeteva.

Alex is now the highest ranked Southeast Asian. The closest Southeast Asians in the world ranking are Thailand’s Peangtarn Plipuech (356th) and Chanelle Van Nguyen (368th), who represented Vietnam in the recent SEA Games but still carries the US flag in the pro tour.

Alex is the fourth-youngest player ranked in the top 300 in the world. Former world junior No. 1 Victoria Jimenez Kasinteva, three months younger than Eala, is 180th in the world.

Fifteen-year-old Brenda Fruhvirtova of the Czech Republic, who already has six ITF singles titles to her name, is the youngest player in the top 300 at 192nd. Her fellow Czech, 16-year-old Sara Beljek, is 193rd in the world and the second-youngest in the top 300.

She gets world-class training in Spain

A key element to Alex’s success is the world-caliber coaching she gets from what is arguably one of the hottest tennis academies in the world right now, the Rafa Nadal Academy (RNA) in Manacor, Spain.

Alex has been based in Spain since she was 13 years old when she and her brother Miko were recruited to join the academy, which combines tennis and education and offers its students a unique training system that is based on the experiences of Rafael Nadal in the ATP pro circuit.

Alex is a scholar in the RNA which reportedly charges an annual fee of over $60,000 for tennis training, studies, and board and lodging.

Headed by Toni Nadal, Rafa’s uncle and former coach, the Rafa Nadal Academy left a major imprint in this year’s US Open.

Aside from Alex, there were three other big-name winners in the US Open who trace their roots to the academy.

It is small wonder that Alex has turned into a champion since she trains in the same grounds that produce Grand Slam winners.