ONE GOAL. The Philippine Paralympic Team aims to make history as well in the Tokyo Games.

The country’s best Filipino para athletes take center stage in the Tokyo Paralympics after their able-bodied counterparts achieved a historic campaign in the Tokyo Olympics.

The Philippines is sending a team of six Paralympians who are determined to surpass expectations and are also inspired to bring home elusive mints from the quadrennial sports event.

Get to know the Filipino para athletes representing the country in the Tokyo Games that will run from August 24 to September 5.

Ernie Gawilan is one of the top bets of the Philippine Paralympic team after he became the most bemedaled Filipino para athlete in the 2018 Asian Para Games in Jakarta, Indonesia.

Hailing from Davao City, Gawilan bagged three golds and two silvers in the Asiad after ruling the ASEAN para swimming scene as a seven-time gold medalist. He also saw action in the 2016 Rio Paralympics.

Gawilan formalized his return to the biggest stage in sports when he secured a direct qualification to the Tokyo Games in the 2021 World Para Swimming World Series in Berlin, Germany, where he bagged the bronze in his pet event, the 400m freestyle.

The 30-year-old veteran para swimmer was tapped to carry the flag in the closing ceremony of the Tokyo Paralympics on September 5.

Gawilan was born with underdeveloped extremities after his mother’s failed abortion. He lost his mother, got abandoned by his mother’s husband, and left under the care of nuns where he discovered swimming.

US Marine accused of killing Filipino in Olongapo to be deported

Jerrold Mangliwan continues to be the veteran presence in the Paralympic team and will lead the Philippine march as the flag bearer in the opening ceremony of the Tokyo Games on August 24.

A two-time ASEAN Para Games gold medalist, Mangliwan made sure that the whole team will head into the biggest stage in sports with high-morale as he also hopes to surpass his performance in the 2016 Rio Paralympics.

Mangliwan crashed into the final of the men’s 400m T52 in the Rio Games, but missed a podium spot as he finished seventh.

In 2021, the country’s top wheelchair racer from Tabuk, Kalinga secured a Tokyo Paralympics berth based on his past performances cleared by the International Paralympic Committee’s (IPC) minimum qualifying standard (MQS) and minimum entry slot (MES).

The 41-year-old has paraplegia after being diagnosed with polio when he was two years old, which bound him to a wheelchair as long as he could remember. He started wheelchair racing in 2009 after friends and coaches encouraged him to get into para athletics.

(UPDATE: Allain Ganapin will no longer see action in the Tokyo Paralympics after testing positive for COVID-19. Full story here.)

Allain Ganapin made history as the first Filipino para taekwondo jin to qualify for the quadrennial meet as the sport makes its debut in Tokyo.

Ganapin, who has been with the Philippine team since 2016, qualified for the World Para Games via a bi-partite invitation by the World Taekwondo Federation.

In his five years with the national team, Ganapin won a bronze medal in the 2017 Oceania Para Taekwondo Open in Auckland, New Zealand, and went home with a bronze in the 2021 Asian Olympic qualifiers in Amman, Jordan last May.

The youngest in the delegation at 23 years old, Ganapin shared that he wants to use his Paralympics experience to inspire the differently abled who are victims of bullying like him when he was younger.

The taekwondo jin from Marikina was born with an amputated right arm due to complications with the umbilical cord during his birth. 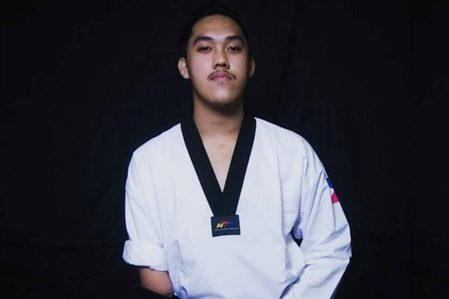 (UPDATE: Jeanette Aceveda will no longer see action in the Tokyo Paralympics after testing positive for COVID-19. Full story here.)

Aceveda, the oldest in the team at 50 years old, qualified for the Paralympics via MQS and MES, which considered her discus throw performance in a tournament in France. She recorded a personal best of 18.27 meters, which eclipsed the MQS of 18 meters.

The Mindoro native has been part of the national team since 1997, and owns two gold medals from the discus and shotput events in the 2014 ASEAN Para Games.

Aceveda was diagnosed with retinitis pigmentosa on one eye when she was three years old, but it started to affect her other eye as well, making her partially blind.

She overcame many challenges in her career, including sustaining injuries from a motorcycle accident in 2010.

Gary Bejino achieved another milestone by nailing a Paralympics berth in his young swimming career.

Being able to excel across the different swimming events, Bejino will be competing in four events – the most for an athlete in the country’s Tokyo Paralympics team.

The 25-year-old swimmer from Albay qualified for the Tokyo Games based on his performances in the 2018 Asian Para Games where he won a silver and two bronze medals.

When he was seven years old, Bejino had his arm and leg amputated after getting burned from an electric shock.

(UPDATE: Achelle Guion will no longer see action in the Tokyo Paralympics after testing positive for COVID-19. Full story here.)

The International Paralympic Committee (IPC) gave Guion a bi-partite approval to allow her to compete in the women’s -45kg event.

Her last Paralympics showing was in the 2012 London Games, where she finished sixth out of eight competitors.

As she turns 50 years old in December this year, she is confident of her improvement and her chances for a medal after bagging two silver medals in the 2014 and 2018 Asian Games in her 40s.

Guion, who hails from Sipalay City, Negros Occidental, was struck with polio when she was a year old. – Rappler.com