BACK IN ACTION. Angelo Koume and the Ateneo Blue Eagles start their title defense after over two years.

Facebook Twitter Copy URL
Copied
All eight UAAP universities will play on Tuesdays, Thursdays, and Saturdays in a day-long, quadruple-header format at the closed-door Mall of Asia Arena

MANILA, Philippines – Reigning UAAP king Ateneo Blue Eagles will start a new era without Thirdy Ravena and the rest of their championship core against the UP Fighting Maroons in a first-day “Battle of Katipunan” on March 26 at the Mall of Asia Arena.

The UAAP has released its Season 84 men’s basketball tournament first round schedule on Thursday, a little over a week before tipoff, where all eight league member-schools will see action.

At 10 am, the FEU Tamaraws and the UST Growling Tigers will play the first seniors basketball game since November 20, 2019, followed by a match between the Adamson Soaring Falcons and the NU Bulldogs at 1 pm.

All game days on Tuesdays, Thursdays, and Saturdays will follow this quadruple-header format where all eight universities will play. 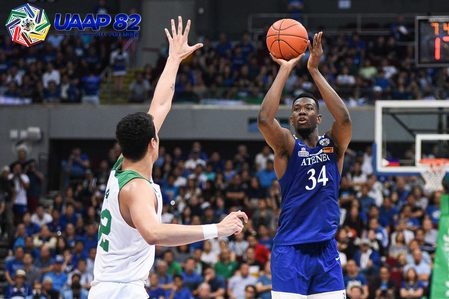 There will be no fans allowed inside the MOA Arena at first, but the UAAP will review possible fan attendance by the second round depending on the prevailing COVID-19 situation, and approval by concerned government agencies.

The men’s basketball tournament will serve as the league’s testing ground for other sports, including top spectator events like women’s volleyball, and the fan-dependent cheerdance competition.