MANILA, Philippines – One can argue the UST men’s basketball program was the busiest compared to its contemporary universities in the two and a half years the UAAP was sidelined by COVID-19.

When the collegiate sports league last operated in 2019, the Tigers prospered in their second year under controversial but successful head coach Aldin Ayo.

The Tigers beat the Tamaraws in the first round of the Final Four stepladder, then upset finals favorite UP even with a twice-to-beat disadvantage. You can thank Renzo Subido in large part for that.

UST lost to Ateneo in the finals, but so did the entire UAAP in Season 82.

Then, the pandemic happened. Sports stopped. More important matters took precedence. The world was in flux.

It eventually came out that the UST Tigers had their version of a “bubble” in Sorsogon, Ayo’s home province, to continue team training.

It was arguably the most disputed local sports topic the entire time Metro Manila was in lockdown, for a number of reasons that ranged from following government procedures to the mental health of student-athletes.

UST’s program now moves forward. Ayo is gone as a repercussion from the bubble, but so is the main core that led the Tigers to the finals. 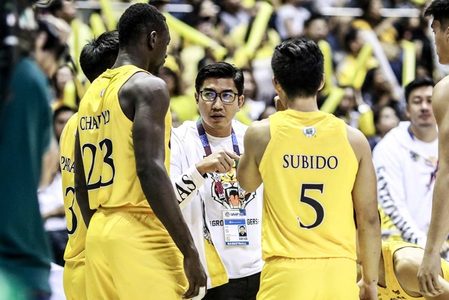 Subido is in the PBA. Reigning UAAP MVP Soulemane Chabi Yo is playing in Europe. CJ Cansino is with UP. Rhenz Abando and Brent Paraiso are in Letran. Mark Nonoy moved to La Salle.

He’s optimistic about the task at hand, which is to rebuild a proud basketball program back to a position its faithful students and alumni ultimately expect – to contend for UAAP championships. The last time they won one was in 2006.

Manansala, in an interview with Rappler, even expressed hope for his team’s prospects at being competitive with the imminent return of the UAAP, which opens on March 26. But he is also realistic, which is why he asks for patience from the community.

“We hope to win as many games as we can,” he admitted.

“Not too high,” he answered when pressed about specific expectations, “as our team is [composed of] mostly newbies.”

Like the seven other universities in the UAAP, UST now has its own bubble, which shouldn’t raise eyebrows like the last one did.

Training takes place at the Quadricentennial Pavilion Gymnasium. Coaches, staff, and players stay at lodging nearby. Everyone takes an RT-PCR test twice a month to ensure COVID-19 does not spread.

“UST fans would have to be patient with our new team, as they get tested [by opponents] along the way,” Manansala advised. “We hope to be healthy and at least competitive come the UAAP games. We will see by then.”

When asked if Manansala would run a system similar to that of his predecessor, he said: “Same system. Nothing changed.”

One familiar name UST can still count on to wear a Tigers uniform is Sherwin Concepcion, who established himself as one of the UAAP’s up-and-coming floor-spreading forwards under Ayo, who is well-known for developing players’ on-court traits.

Former NU Bullpup Paul Manalang will be Manansala’s team captain, he confirmed. Dave Ando is another returning player who figures to have a contributing role. St. Clare transferee Joshua Fontanilla is another name to watch out for, and so is Royce Mantua, a Filipino-Australian previously from FEU.

Unfortunately, former CESAFI juniors MVP LA Casinillo is still in the United Kingdom, and will not make the lineup. Neither will former De La Salle Zobel leading scorer Kean Baclaan, who still has one year of senior high to finish.

UST’s biggest recruit over the pandemic was Jordi Gomez de Liaño, the younger brother of Gilas Pilipinas prospects Juan and Javi. The 19-year-old, 6-foot-5 gunner averaged 13 points and 4 boards a contest in his final season with UP’s high school squad, and is considered one of the country’s promising young ballers.

“Jordi is one player to watch out for,” Manansala said. “He is doing well and may possibly be a starter. Needs to develop though along the way as the team gets tested during actual games.”

The rookie head coach states that the high-profile rookie stands out because of his height and long-distance shooting, but also heads caution.

“He has to develop more heft though, but it takes time. We hope he can gel with the team. We hope the other rookies can do the same significant contribution to the team.”

Manansala said his team is “not too strict” with their diet and extra workouts, like weightlifting, and “personal preferences,” as the Tigers coaching staff hope their players will be “accountable for their own skills training and conditioning.”

The head coach also said no final lineup for the season has been determined, and declined to comment on which foreign player will replace Chabi Yo.

“We are just quite lagging in team practice,” Manansala added. “[There’s] much to do and hope for.”

But of course, patience is also key. – Rappler.com