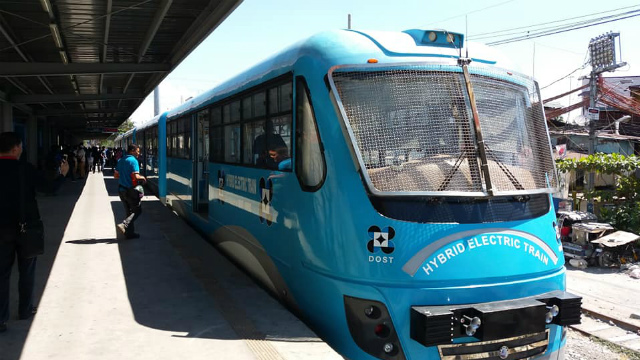 MANILA, Philippines – The Department of Science and Technology (DOST) officially launched its hybrid electric train (HET) – the first train to be built by Filipinos – through an inaugural run from the Philippine National Railways’ (PNR) Alabang Station to Biñan station on Wednesday, April 24.

After the inaugural run, the train will begin a 150-hour “validation testing” phase for the public, starting May 6.

Prior to the inauguration, the train went through a 5,000 kilometer run for its initial testing, with the DOST reporting no major failure. Demo runs were also held in July 2018 from Dela Rosa in Makati to EDSA as part of the department’s National Science Technology Week. All in all, the train was in development for 5 years.

DOST says it seeks to augment the number of trains being used by the PNR. The train, made of 5 coaches that are 12 meters in length, will have a maximum capacity of 880 passengers. The train makes use of a hybrid diesel-powered generator and batteries, similar to hybrid electric cars.

The DOST says the HET project, along with other similar projects, offer key advantages since it’s locally-made. All the parts and experts are locally available, the train will net foreign exchange savings, and could be a potential export, said the department.

The DOST is also currently developing the Automated Gateway Transit, a train which it says has lower production costs than imported LRT and MRT counterparts. It’s currently in its prototype phase.

A Hybrid Electric Road Train, a 40-meter long train-like bus powered by hybrid diesel fuel and electric-powered battery introduced in 2015, is also now publicly available in Isabela and is in testing in General Santos City. – Rappler.com