The online Zero Waste Academy (ZWA) was the first major project I led since I started working at GAIA in September 2018. The concept was proposed sometime mid-2020 when we were figuring out how to do our in-person activities virtually. We wanted to find a way to continue organizing events for our members and address their training needs, which included the ZWA.

The ZWA is an immersive training designed to give participants the tools to implement a zero waste program in their communities. Developed by GAIA Asia Pacific and Mother Earth Foundation (MEF), the in-person two-week workshop includes lectures, hands-on exercises, and writing sessions.

After translating the face-to-face workshop, the project team came up with a seven-week online course which consisted of learning modules, weekly live discussions, and curated materials such as video lectures, virtual study tours, instructional texts, and case studies.

Being the youngest in the team based in the Philippines, I felt like I had a lot to prove by leading this project. I’d chalk that up to my youthful idealism (read: naiveté) exacerbated by my Overachiever Gene. And to be fair, the concept of the project did excite me at first.

After briefly surveying similar online training programs, I realized I may have bitten off more than I could chew. How could we ensure that participants would achieve the same objectives from this online version, when the main selling point of the ZWA was being physically present in the very communities that the lessons were based on? How could we make this course appealing 11 months after working professionals were subjected to countless virtual meetings, to the point that the term “Zoom fatigue” was eventually coined? How could we translate the experience of walking through decentralized waste collection systems? Would it even be possible to execute this within the project year?

Thankfully, all these worries were replaced with excitement due to the responses we received once we began the application process.

Around 100 applications came in during the three-week period. One of the things I didn’t anticipate was the kind of reach this project would have, and the interest it would generate from individuals of varying backgrounds, localities, and levels of familiarity with zero waste — majority of whom came from outside our immediate network!

The course produced 36 graduates (the traditional in-person ZWA produces an average of 20 graduates per launch). This group was made up of teachers, NGO workers, social enterprise managers, City/Municipal Environment and Natural Resources Officers (CENRO/MENROs), and waste workers that hailed from places like Metro Manila, Davao del Sur, Cavite, Siquijor, and Benguet. Had it not been for the online iteration of this training, we might not have had the opportunity to connect with the zero waste advocates that made up the first Philippine cohort of this project.

Needless to say, executing the project was no small feat. Limited to purely remote coordination with the other members of the project team (Maricon Alvarez and Rap Villavicencio of MEF), on top of accomplishing tasks for other ongoing projects, even I was surprised that we were able to pull it off. What made the entire experience even more fulfilling was knowing that we will be seeing more zero waste programs sprouting in communities around the Philippines — spearheaded by the participants themselves using what they’ve learned from the ZWA!

Is zero-waste lifestyle possible amid the pandemic? During the virtual graduation, Goldie Bansi, a former waste collector from Dumaguete City, shared that she was thankful for all that she learned from the course since it broadened her knowledge on zero waste, which in turn empowered her to continue learning and to pass on these lessons to her children.

Lhermie Areja, a MENRO from Siquijor, learned that implementing zero waste programs is easy, and that one only needs three things to make it happen: the heart to care for the environment, consideration for waste workers, and self-discipline.

Others were struck the most when doing their at-home Waste Assessment and Brand Audit (WABA) activity. Despite being mindful consumers and making use of reusables such as eco bags and tumblers, doing the WABA made them realize how much waste is produced as a result of their daily activities.

In the same vein, the WABA activity made Catherine Liamzon, a researcher from Quezon City, reflect on how waste workers have to go through all sorts of waste. “[It] made me more aware about the different kinds of waste – special waste, hazardous waste…that pose a threat to the lives of our waste workers. I try to imagine just how difficult and dangerous it is to go through unsorted waste. I have the highest respect for our waste workers and I salute each and every one of them,” she said.

In the end, all my initial fears about how the project was going to be received never actually materialized. When asked to describe their ZWA experience, the graduates responded with words like “informative,” “challenging,” “eye-opening,” and “empowering.” And when asked about the most important thing they’ve learned, the most common answer was that zero waste is possible, that it is already happening because the models already exist, and that there is a huge potential for the Philippines to go zero waste.

[OPINION] On the road to a plastics-free Philippines 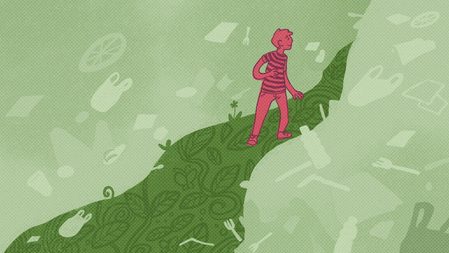 Working on this project taught me not to underestimate people’s willingness to learn. With nearly a year of being stuck at home for most participants, I expected more resistance and indifference when it came to interacting with the course materials. Fortunately, this did not turn out to be the case.

Similar to funding centralized solid waste management systems, producing the ZWA online also required high levels of investment (in the form of my time, effort, and mental fortitude). But unlike these inefficient methods to manage waste that subvert the advantage of a localized, environmentally-just, and people-centered approach, my investment resulted in a huge payoff. Hearing participants say that they now believe that zero waste is possible because of what they learned from the course assuaged all my anxieties and was exactly the ROI that I needed to feel hopeful about the future again.

While much of the world is still grappling with the pandemic, and systematic solutions to our worsening health and economic crises seem to be nowhere in sight, we can expect that the near-future iterations of the ZWA will remain online for the safety of everyone involved.

I am hoping that future launches won’t be as daunting to execute since we’ve already seen that this virtual approach, while not as experiential, actually works. All we need to do is provide participants with appropriate learning materials, the opportunity to interact with experts, the space to meet other zero waste advocates, and we’ll already be halfway there.

To build a zero waste world, we must work together and enact positive change within our spheres of influence, provide livable compensation to waste workers, and hold manufacturers accountable for contributing to this extractive culture that undermines the importance of the taking care of the environment as something integral to our survival.

If there’s one thing to take away from this experience, it’s that zero waste really is easier done together. – Rappler.com

Felicia Dayrit is GAIA’s Zero Waste Cities Program Associate for the Asia-Pacific region. She graduated from the Development Studies Program of the Ateneo de Manila University in 2017. Right after graduating, she lived in Eastern Samar as a Jesuit Volunteer where she was assigned as a Community Enterprise Organizer. She returned to Quezon City in April 2018 and started working at GAIA in September 2018.

Visit academy.zerowaste.asia or contact zwa@no-burn.org to learn more about the Zero Waste Academy.