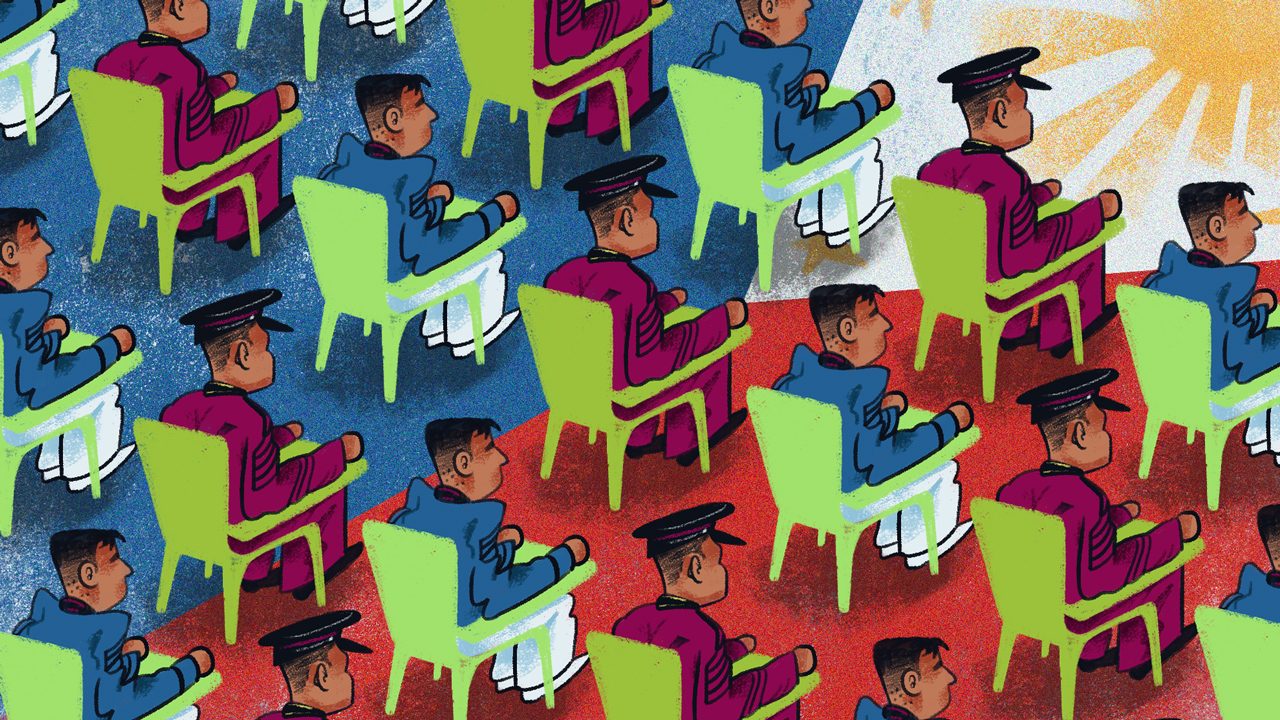 A new proposed bill, filed by Senator Jinggoy Estrada, aims to institutionalize the teaching of the Constitution among high school students. It’s a good, even welcome, proposal. But here’s a better suggestion: why not integrate a mandatory constitutional education within the Philippine National Police Academy (PNPA) and the Philippine Military Academy (PMA)?

Under Senate Bill No. 1443, the Estrada bill claims that the integration of what his bill called “mandatory constitutional education” into Junior and Senior High School curricula will instill a “nationalist mindset” grounded “in their commitment to the nation.” Let us take a brief pause and reflect on these objectives. They’re not misguided; in fact, these principles are crucial in nation-building at this critical juncture in our history.

But the 2022 national elections are proof that today’s generation of young students are not deficient when it comes to embodying nationalism and a commitment to the people. In fact, the youth are at the forefront of various social movements in this country, from community pantries to community organizing, which seeks to “instill” in each other — and to foster to the rest of our people — the tenets of a “nationalist mindset.”

Contrast that with the behavior and principles exhibited by the country’s police and military force, and the Philippine government as a whole. Malacañang is the unlikeliest example of patriotic fervor at this point, because what kind of “nationalism” is a government, which refuses to to defend our country’s territorial, economic, and social interests from China’s incursions and American intervention, promoting? A “nationalist mindset” that is bound by subservience to domineering foreign powers? In the same breath, is there a shard of nationalist ardor left in a military that once allowed a China-backed telecommunications corporation to build its satellite towers inside their camps, or a police force that chooses to provide greater protection to the US Embassy against unarmed protestors over their own countrymen?

The Estrada bill also invokes a “develop[ment of] appreciation and exercise of democratic values” as one of its central themes. More than young students, it is evident that the police and military require a “deeper appreciation of the exercise of democratic values” to understand that protests are not communist ideas, but are civil rights sanctioned by the Constitution itself, or that red-tagging dissenters is dangerous to democracy at all times. Or that following former president Rodrigo Duterte’s shoot-to-kill orders against anyone, be it drug suspects or suspected rebels, is against the very nature of democracy.

The National Task Force to End the Local Communist Armed Conflict (NTF-ELCAC), fascist mouthpieces Lorraine Partosa and Antonio Parlade, and the SMNI Network need to undergo requisite constitutional education all the more, since their understanding of democracy is flawed at best, and anti-democratic at worst. No person or institution which has a genuine understanding of how democracy works would resort to relentless vilification campaigns, targeted repression, and even state-sponsored violence to stifle the opposition.

More than anything else, it is Ferdinand Marcos Jr. and Sara Duterte-Carpio themselves who have to undertake a “refresher” on the Constitution to obtain a better purview of democratic principles. It is undemocratic to defend Martial Law and deny the Marcos dictatorship’s record of human rights abuses, colossal plunder of the nation’s coffers, and abuse of constitutional power. It is undemocratic to enforce mandatory military service training among universities whose academic liberties are already under siege from an autocratic military and police force. It is undemocratic to go on a party binge or to record irrelevant “vlogs” suited for mindless entertainment while the nation and our citizens are buffeted by socioeconomic crises. It is not mistaken to foster a deeper appreciation of the Constitution and of democracy among Filipino citizens. But it is also the height of ignorance, on the part of Senator Estrada and his bill, to overlook the fact that, more than students and the youth, it is the country’s government officials — from the president down to the police officer or soldier — who all the more should engage in a deeper study of the Constitution, of how democracy should work, and of what “active citizenship” and “people’s participation” entail.

Why? It’s simple: it is the Philippine government — under both the Duterte and Marcos regimes — that has exhibited and endeavored for the most anti-democratic and anti-constitutional actions and perspectives for close to seven years, and counting. After all, tens of thousands of Filipinos were slain by the police in the course of Duterte’s murderous “drug war,” or by the military in carrying out its bloody counter-insurgency war and operations — both of which are flagrant contradictions of our country’s laws, the Constitution’s Bill of Rights, and the democratic principles in which our country still strives to take pride.

The students who take the lead in organizing and mobilizing our countrymen in various movements struggling for social change; the journalists who are committed to defending facts and amplifying the truth in the age of post-truth disinformation; the social activists who soldier on dreaming and fighting for a more radical future despite the string of false charges, harassment, and executions heaped upon their ranks; the educators who refuse to cease in the job of safeguarding history and infusing critical thought inside their classrooms; and the ordinary Filipino who lives to serve their fellow Filipino, from farmers to workers to health frontliners — they are the ones whose deep-rooted respect for, and adherence to, the noble principles of democracy engraved in our Constitution are beyond any reasonable doubt. They thrive in democratic spaces, resolve to fight for its defense, and even offer their lives in its name.

Senator Estrada must be reminded: the country’s police and military academies, or his fellow politicians, should be schooled more about patriotic and democratic values. Or himself. Perhaps, this reeducation among themselves might finally end the incessant state-backed mass murder of our people, or government officials’ shameless stealing of taxpayers’ money, or the culture of impunity that is pervasive in Philippine state institutions. – Rappler.com

Karl Patrick Wilfred M. Suyat is one of the three co-founders of Project Gunita, an academic and research organization focusing on archival material about the Marcos dictatorship, and a member of the Institute for Nationalist Studies, a youth-led and progressive research organization. He also studies in UP Diliman under a creative writing associate course.