[OPINION] Soberana: What we can learn from Cuba’s healthcare system After more than 60 years, Cuba has entered the post-Castro era. Raul Castro recently announced that he is stepping down as the first secretary of the Communist Party of Cuba. He previously stepped down as the country’s president in 2018. Raul held both positions for 10 years, after succeeding his late older brother Fidel, who died in 2016.

Compared to his younger brother, Fidel Castro ruled the island longer, for 50 years. It can be remembered that the Castros rose to power in 1959 when they succeeded in overthrowing the US-backed dictator Fulgencio Batista after two years of guerrilla warfare. As Fidel promised a better life for the Cuban campesinos (peasants) and trabajadores (workers), the most decisive step that he made was the nationalization of American-owned industries and sugar plantations throughout the country, which had enslaved the Cuban people for decades. He also nationalized social services like education and health care. This, in turn, infuriated American interests on the island, which culminated in the Bay of Pigs Invasion and, subsequently, the United States’ economic blockade in 1962 which continues until today.

Since then, health care became the heart of the Cuban Revolution. As the US blockade severely affected Cuban public health, the revolutionary government prioritized it by nationalizing medical services. Argentine-born Cuban revolutionary and physician Che Guevara stated in his essay “On Revolutionary Medicine”: “The work that today is entrusted to the Ministry of Health and similar organizations is to provide public health services for the greatest possible number of persons, institute a program of preventive medicine, and orient the public to the performance of hygienic practices.”

In Cuba’s 2019 Constitution, not only was the socialist revolution ratified, but the state’s priority for health care was as well. In Article 72 of the Constitution, the state declares that “public health is a right of every Cuban” and ensures its responsibility “to guarantee access to quality medical attention, protection, and recovery services, free of charge.” Furthermore, it says that to effectuate this right, the Cuban state should institute “a healthcare system at all levels that is accessible to the population and develops prevention and education programs in which the society and families contribute.”

If you do not believe that Cuba’s health care is largely free, you need to watch Sicko. It is a 2007 American documentary film by Michael Moore exposing the profiteering and negligence of the US healthcare system. In the film, Moore brought some 9/11 rescue workers, who suffered work-related maladies, to Cuba after years of the US government’s denial of assistance funds. In Havana, they were shocked when they were able to purchase inexpensive medicine and receive free medical treatment by merely giving their names and birth dates. They also learned that pharmacies could be found on every block.

A 2012 study published by the American Journal of Public Health acknowledged the success of Cuba in providing a world-class healthcare system despite its limited resources, which is further aggravated by the US blockade. The study also recognized their lower infant mortality rate of 5 per 1,000 births. Here in the Philippines, unfortunately, the rate is 22 per 1,000 births, according to the Philippine Statistics Authority in 2013.

The World Health Organization (WHO), in 2015, recognized Cuba as the first country to eliminate the mother-to-child transmission of HIV and syphilis. Like other diseases in Cuba, this became possible through preventive care i.e., free access to prenatal care, HIV and syphilis testing for women and their husbands, substitution of breastfeeding, etc.

Cuba is also known for its medical internationalism. Since the 1960s, the Cuban government has already sent tens of thousands of doctors to other countries, mostly in Africa and Latin America, to assist those victimized by wars, disasters, and epidemics. One of the latest Cuban missions sent hundreds of medical personnel to Italy during the coronavirus outbreak in the country last year. This humanitarian solidarity can be explained by the Cuban adherence to the humanist ideas (Homeland is humanity) of Cuban national hero Jose Marti, and Karl Marx’s proletarian internationalism (Workers of the world, unite!).

Leaders of 23 countries back pandemic treaty idea for future emergencies 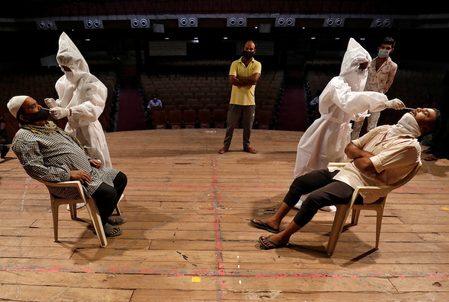 Right now, amid the COVID-19 pandemic, we should set our eyes on Cuba’s development of its own coronavirus vaccines. According to The Lancet, an international medical journal, Cuba’s Soberana-2 is already in Phase 3 trials. It is one of four vaccine candidates produced by the Finlay Institute in Havana. So far, Cuba is the only country in Latin America to manufacture a vaccine that has advanced to Phase 3 trials.

Prior to these vaccines, Cuba had already developed CimaVax, a lung cancer vaccine. It is a product of the state-run Center for Molecular Immunology, which started testing the vaccine back in the 1990s. The Roswell Park Cancer Institute of Buffalo, New York even signed an agreement to import the Cuban vaccine and put it through trials in the United States. This is widely impressive despite roughly 60 years of the US blockade that continuously punishes the country, socially and economically.

Looking at the vaccine’s name (soberana is Spanish for sovereign), it seems that Cuba’s development of its coronavirus vaccines is a symbolic exercise of its sovereignty. Cuba’s resoluteness to continue striving in the field of health care is a manifestation that it will never kowtow to its northern neighbor. Cubans show that they need neither the Americans nor the Russians to survive on their own, as they continue the building of socialism even after the imposition of the US blockade and the collapse of the Soviet Union in 1991.

Amid the dying state of its healthcare system (which had already deteriorated even before the pandemic), the Philippines should stop its dependency on foreign aid, either from the United States or from China. Instead, the country should learn to take the independent path without being subservient to great powers. We should highly consider following the Cuban model of having public health as a right, of having a preventative approach to treating diseases, and of having the state commit to medical research. Most importantly, and as far as Cuba is concerned, these can only be achieved by asserting one’s sovereignty and genuine independence. – Rappler.com

Jervy Briones is a lecturer of history at UP Los Baños. He took AB History at PUP Manila and is currently finishing his MA in Philippine Studies at the Asian Center at UP Diliman. His research interests revolve around social movements, Marxist/critical theory, and cultural studies.

[OPINION] On the politics of Sinovaccination