[OPINION] What Carpio’s coalition means for the 2022 elections Facebook Twitter Copy URL
Copied
'[The] struggle for democracy, good governance, and a competent administration in this country transcends Duterte. His successor, opposition or not, would do well to remember that.'

On March 18, 2021, former Supreme Court Justice Antonio Carpio formally launched what we might possibly call, in little more than a year from now, his magnum opus: 1Sambayan, a broad coalition of pro-democracy groups, good governance advocates, career bureaucrats, and Duterte dissenters going up against the incumbent’s slate in the upcoming 2022 Philippine general elections.

In its ranks are former Ombudsman Conchita Carpio-Morales, diplomat and former Foreign Affairs Secretary Albert del Rosario, human rights lawyer and activist Neri Colmenares, and Jesuit priest Fr. Albert Alejo SJ, alongside other past and present personalities. Their goal is simple: if they want any hope of a chance against Duterte’s heir, they have to unite an infamously fragmented opposition.

Rodrigo Duterte rose to power in 2016 amid a wave of populist backlash against the traditional order, personified by the Aquino government and the ruling Liberal Party. Duterte – a relative newcomer to the national scene – won a landslide victory against Liberal torchbearer Mar Roxas, neophyte Grace Poe, then-Vice President Jejomar Binay, and fiery veteran Miriam  Defensor Santiago, in what could either be one of the country’s most remarkable political feats in recent history, or a terrifying reminder that the propensity for tyranny is ever-present in democratic societies. Whatever it was, it did not matter – the upstart of Davao managed beyond expectations. 16 million Filipinos voted for him that day.

But whatever happened to all the rest?

The opposition had as much to do with Duterte’s win as Duterte himself. If there was any innate advantage they bore, it was the existence of an already-established voter base. Looking back, Duterte’s demographic was much less a homogenous group of like-minded individuals as it was a loose collection of disillusioned parties, ranging from the urban poor to the Philippine Left. Having both a Liberal Roxas and an Independent Poe run against each other for the presidency effectively split the “moderate” vote – 18 million voters in the polls – resulting in a meager 9 million each against Duterte’s 16.

Despite the myriad of interests, ideologies, and backgrounds that comprised Duterte’s cohort leading up to the 2016 elections, one thing was absolutely clear: they were united in their abhorrence for the old order – an order Duterte promised to dismantle.

Ultimately, the opposition’s failure to present a united front against a sweeping radical change, of which Duterte was the embodiment, is precisely why we call them the opposition today. And it is also their failure during the 2019 midterm elections that has left them powerless to act against an authoritarian brand of politics, unseen since the 1970s and 80s, that threatens to extinguish the liberty and democracy they had sought to protect.

Four years into the Duterte presidency and the political situation has shifted. Like any transitory relationship, Duterte’s coalition of expedience is crumbling apart. Without consensus on a definite successor, a power struggle between former aide and neophyte Senator Bong Go and  presidential daughter Sara Duterte for the administration’s legacy – with PDP-Laban’s own Manny Pacquiao hovering just above their heads – might well cost them a victory this 2022, as it did for Roxas and Poe in 2016.

And as Aquino did in 2016, the incumbent Duterte and his allies are now  confronted with a Filipino public disgruntled, disillusioned, and eager for another drastic change in government – their government. In contrast, Carpio’s coalition, broad it may be – comprised  of everything and everyone, from legends of the past, to the old Liberal Party, to elements of the  Philippine Left brought back into the fold (at least, for now) – is cemented by the burning desire to end the Duterte legacy once and for all. The willingness to cross party lines and even momentarily reconcile ideological differences, marks the birth of a more decisive, if more desperate, opposition.

It should come as no surprise then, that if the administration continues to blunder its way through its handling of the pandemic, the economy, and the demands of an increasingly antagonized mass base, come 2022, it may wake up to find that the tables have indeed turned.

But if there is any one constant in the politics of elections, in so far as they are a free and a democratic one, it is that power ultimately resides in the hands of the people. Many Filipinos may well be looking to replicate Biden’s victory and Trump’s ouster in the 2020 US presidential election, but to look and to act are often two very different things, one harder than the other. It  remains to be seen whether the supposed unity of this new opposition can reflect on the broader public, and if the sentiments of the broader public can shape the new opposition. 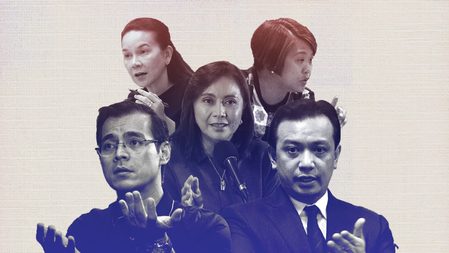 With various names being thrown back and forth, from safe bets like Vice President Leni Robredo to controversial ones like Manila Mayor Isko Moreno, 1Sambayan’s 2022 slate will not satisfy everyone, to say the least. Indeed, Filipinos might just be faced with the same dilemma American  progressives had in 2020 – at best, voting for a candidate with reservations; at worst, voting for a candidate they do not believe in. With the urgency of the matter at hand, would they be willing to go all the way? Is voting for a “Biden” a betrayal of their principles, or is it a necessary compromise in the face of a formidable enemy?

Regardless of class, party, or ideology, what Filipinos must come to realize is that, as a general principle, they need people in government who are more likely to succumb to the pressures of their collective power. Members of the administration have shown that they are not such people. The way the coalition sees it, first thing’s first: get rid of Duterte and his cadre. But for the many millions of Filipinos out there, one thing is beyond contestation:  the struggle for democracy, good governance, and a competent administration in this country transcends Duterte. His successor, opposition or not, would do well to remember that.

In the end, while Malacañang might think it too early to talk politics, clearly, for Carpio and his associates, every day from this day might as well be election day. – Rappler.com