[OPINION] What ‘voter education’ misses about the problem of electoral politics 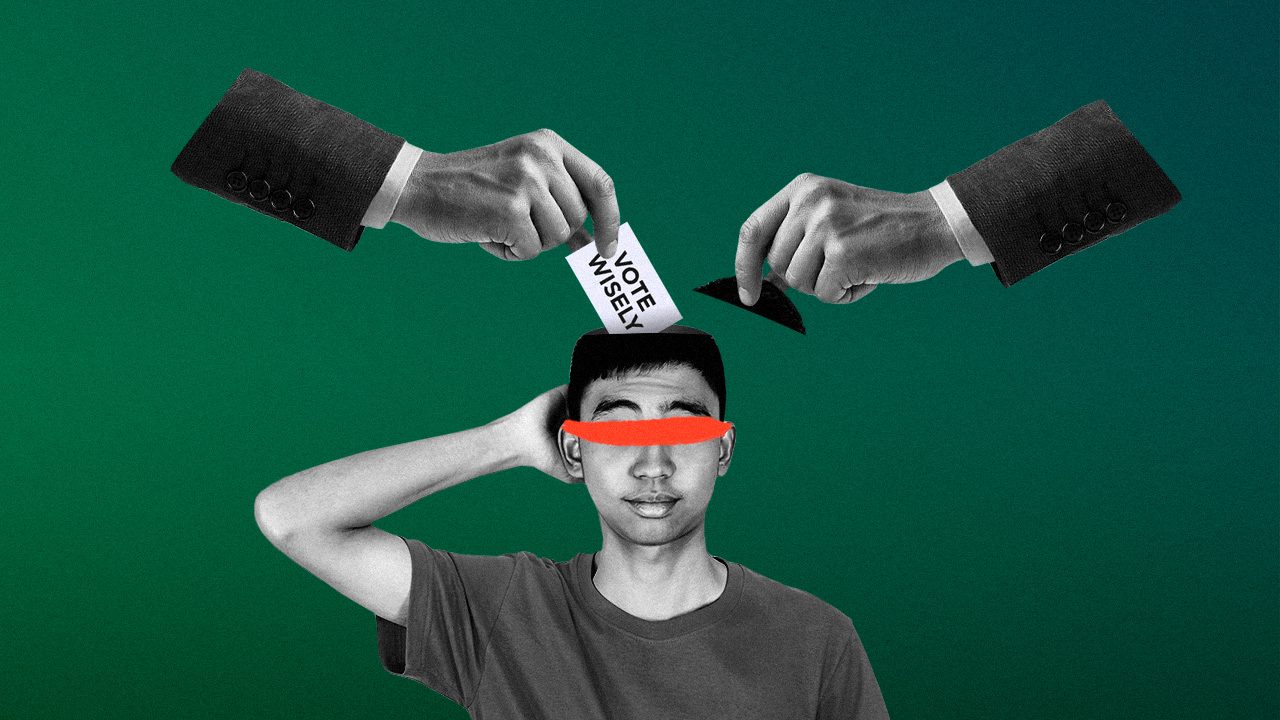 Facebook Twitter Copy URL
Copied
'At the very least, we should listen to those whose very lives are shaped by social insecurity and political struggle. In listening, may we also be educated about matters that our privileges blind us to.'

Lately, posts celebrating Biden’s win in the US presidential elections have flooded my social media timelines. These posts suggest that if Americans can vote their populist out of the presidential office, then so can Filipinos.

#Halalan2022 trended. People encouraged each other to register now and vote later. Some hoped to volunteer for potential opposition candidates, or spearhead “voter education” campaigns.

And then Senator Pacquiao assumed the leadership of the PDP-Laban Party, fueling existing suspicions that the sportsman-cum-legislator would run for the country’s top post in 2022. Groans echoed in virtual chambers. Pacquiao seemed to embody the ills afflicting Philippine elections: celebrity politics, conservatism, partisan opportunism, and the competitive advantage of belonging to the ruling party. A tweet touting the importance of educating one’s social inferiors about voting intelligently went viral. Woke Twitter had a feast over the “elitista” vs “bobotante” binary.

I felt my frustration mounting as I scrolled through these posts.

Civil society tends to assume and reinforce the idea, so common in “liberal” circles, that the problem with our democracy is that voters are misinformed: they lack education; they distrust “oligarchic” or “biased” mainstream media; new technologies overwhelm their capacity to assess the hyperabundance of information circulated in the digisphere. From this diagnosis comes the prescription: more voter education. This understanding of Philippine politics effectively frames “populism” as a social disease and “Dutertismo” as the problem itself rather than as a particularly visible expression of longstanding problems. More worryingly, it limits our imaginations of democracy, political society, and our place in it.

Voter education can only go so far when it is the entire electoral system that needs reforming, so that its institutions are better equipped to deal with the reality of extreme social inequality and the “elite capture” of state power. Example of reforms include strengthening mechanisms for auditing campaign expenses and punishing violators, regulating the use of digital media in campaigns, and ridding the party-list system of parties that don’t genuinely represent marginalized sectoral interests. It seems to me that lobbying for institutional reform and regulation, rather than seeking to influence individual voter preferences, would more effectively improve our democratic systems — because we can “educate” voters all we want, but if the structural factors don’t change, then the situation would parallel the discourse of “resilience” and its emphasis on individualized risk and responsibility in the face of calamity.

While institutional reform is important, we should also not let our imagination of collective political life become so impoverished that it would primarily hinge on elections every few years, because democracy is not about playing a high-stakes betting game.

The ideology of electoral politics presumes and gives the appearance of political equality: one person = one vote. It also assumes (or hopes) that people vote in their best interests, i.e. for national “progress.” However, the same ideology fuels the civil society discourse of “bobotante,” which blames the poor and “ignorant” masses for “bad” electoral outcomes that install corrupt and incompetent trapos in government. What this ideology obscures are the realities of a sharply uneven playing field.

On the “supply” side, the electorate is stuck with members of the same elite families to vote for — some politicos are just worse than others, but they generally represent their own class interests. The game of “musical chairs” is often evoked to symbolize electoral politics, whereby public offices are passed among rotating members of the ruling class. Another metaphor: public office as family heirloom — inheritance, like land. This “supply side” problem implies that even if Filipinos had “clean elections,” we would still have little chance of getting leaders that aren’t trapos.

On the “demand” side, consider class demographics: classes ABC (the upper and middle classes) account for less than 10% of the adult population. Take again the perspective of the “enlightened” middle class seeking to “educate” the masses (as if the poor were not politically aware) to vote for candidates with concrete plans and administrative competencies, and not for “populists” who use “spectacles” to enchant “the masses.” Winning the numbers game of elections seems near impossible.

With the inequities that structure our social reality in mind, the ideology of electoral politics seems like a sham, used to legitimize a political system that facilitates the legal, orderly, and intergenerational transfer of power among dynastic elites. But what the poor well know is that whoever sits in power, the consequences are much the same for them. Some trapos are just worse than others — so better vote for the trapo they like or have a better chance of receiving help from. Take, for instance, the administration of former president “Noynoy” Aquino — lauded for its anti-corruption drive (“Daang Matuwid”), bureaucratic efficiency, and sound public policy that drove record economic growth — and ask, who benefited from that growth? Who is served by “development?”

My experiences working with labor unions, welfare activists, and other precarious collective formations of migrant Filipino domestic workers in Hong Kong, joining in their negotiations and contentions with the state, have taught me that “democracy” is not about elections but about everyday political participation. The activists in my circle see Philippine elections as not only madumi (“dirty”), but also ineffective in forming a government capable of addressing structural inequalities through long-term plans faithfully executed by successive administrations. The problem, as they see it, has to do less with technocratic competencies, and more with political will, i.e. the unwillingness of elites to institute “progressive” reforms in the public interest. Thus, for them, the primary — though not the only — arena of political struggle is not in parliament, but in the streets.

The systemic ills that plague Philippine society demand no quick remedies. Even with a change in leadership, the bureaucracy “corrupted” by Duterte’s personalistic and authoritarian style of governance would remain. The same dynasties would still dominate the government, blocking the passage or effective implementation of progressive legal reforms. This is why relentless political pressure from “below” is so important.

We should do more than focus on the game of elections and hope that a “better” administration would solve present democratic crises. We can help deepen our democracy by joining or supporting grassroots activist organizations that strive to organize and empower marginalized groups and at-risk communities, so that the silenced majority can more effectively fight for their collective interests. At the very least, we should listen to those whose very lives are shaped by social insecurity and political struggle. In listening, may we also be educated about matters that our privileges blind us to.

Activist politics is founded on the awareness that the “equal rights” supposedly guaranteed by the law is ineffective in practice, that some people’s enjoyment of their rights depends on others’ deprivation of theirs, and that where the protection of rights is not guaranteed, those whose rights are most at risk must continually fight to claim them. This struggle — which is political, economic, and cultural, all at once, on various fronts — demands grassroots organization for resource-sharing, mutual aid, collective empowerment, and effective movements to hold power to account on an everyday basis. As in living through this pandemic, strengthening the herd is our best option for collective survival. – Rappler.com

Kristine Reynaldo is an activist and PhD candidate in Cultural Studies currently based in Hong Kong. Her research relates (broadly) to populism, postcolonial democracy, and the politics of the governed in the Philippines and among transnational migrant workers.