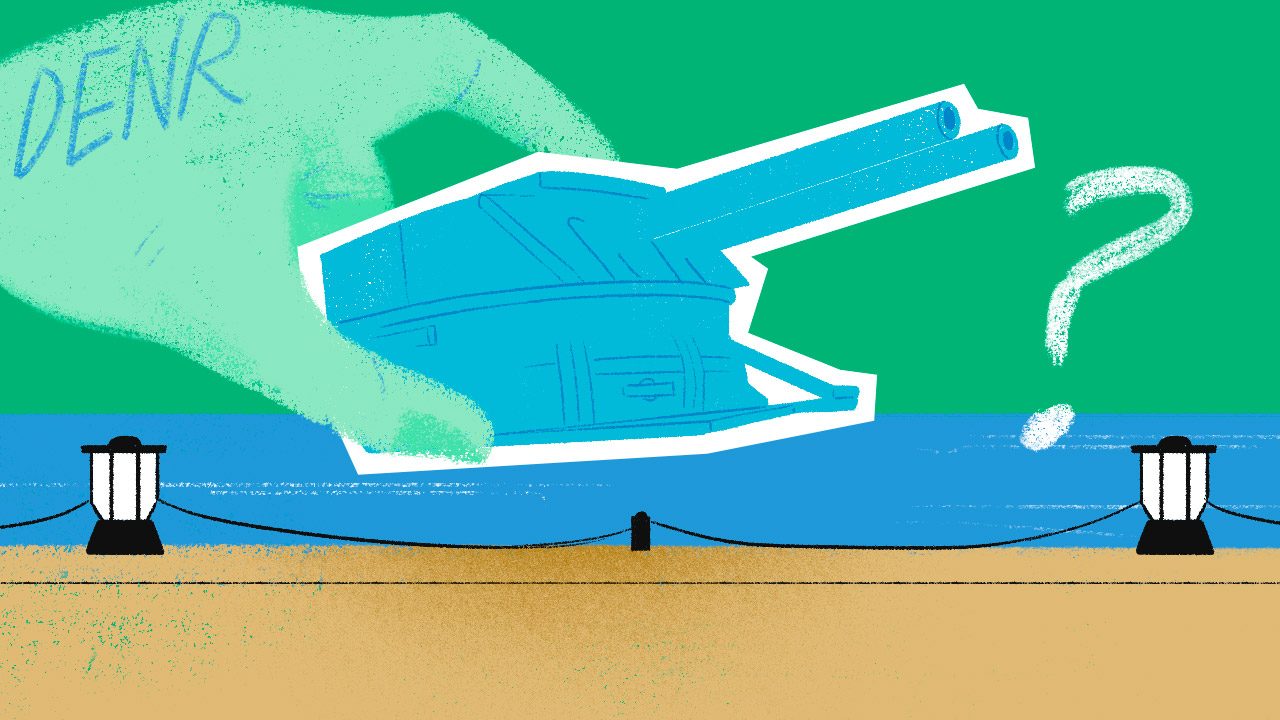 Facebook Twitter Copy URL
Copied
'The unsightly cannon replica, Cimatu’s swan song in the DENR, is not only untimely and wasteful: it is bizarre'

Amid a global pandemic and the national election fever, the Department of Environment and Natural Resources (DENR) has announced that it has partnered with the Department of National Defense (DND) to install a battle cannon replica along the Roxas Boulevard Baywalk in Manila. The structure will be a replica of a cannon in Fort Drum Island, otherwise known as El Fraile Island, which was built by the Americans from 1909 to 1914 to bolster the defense of Manila in case of a naval invasion. It was captured by the Japanese during World War II. US forces torched the fortified island upon its recapture, rendering it permanently out of commission. Not that it was particularly useful in the first place. It was reportedly “over-engineered,” a giant, concrete battleship that cannot go anywhere.

What special reason does building a cannon replica at the height of a pandemic serve, one might ask? And what business does the DENR have in shaping the war commemoration landscape of Manila when clearly it is not within its mandate? Former DENR Secretary Roy Cimatu said that the replica will serve as “a physical reminder of DENR’s commitment and willpower in our battle to rehabilitate Manila Bay.”

What a stretch for the DENR. But perhaps not for Cimatu, a retired general of the Philippine Army who recently resigned from his DENR post due to health reasons. When Cimatu helmed the DENR, the task of Manila Bay rehabilitation was framed through war analogies. The January 28, 2019 cleanup was dubbed “Battle for Manila Bay” by Cimatu, with different government agencies and the private sector joining. To no surprise, the military and police joined in on the fun. War metaphors have been used in crisis and political communication. Even the pandemic has been likened to war. War tropes have been used and abused, to the point that they already fail to induce a sense of emergency, as research on communicating messages that scare people can be alienating and lead to apathy instead. Although it seems for a DENR helmed by a retired army general, the war metaphor for the Manila Bay cleanup is not enough; it must be materialized through a war memorial, too.

Cimatu says the landmark “shall depict three battles: the Spanish-American War, the Japanese American War, and now, the modern battle for Manila Bay.” The mention of the two actual wars was interesting. In the truest sense of the word, these are not necessarily Filipino wars but are merely wars that unfolded in Manila Bay. It begs to be asked, then: what memory will the landmark evoke? The Spanish-American War in Manila Bay was a prelude to the US Occupation: the Philippine Revolutionary forces, fighting the Spanish colonial government, thought they found allies with the Americans, only to find out that they were new colonial masters. The “Japanese-American” War that Cimatu weirdly referred to (really, who calls it that) was World War II. Perhaps he was referring to the Battle of Manila in 1945, which utterly destroyed the city. American bombs leveled large swathes of the city, and an estimated 100,000 to 240,000 Filipino civilians were killed.

[OPINION] A memorial for fallen frontliners is not a bad thing. The timing is. What message does the cannon replica convey to the people who visit Roxas Boulevard in Manila Bay? According to the Philippine Veterans Affairs Office (PVAO) of the DND, visitors will be reminded of “the historical battles and unnamed heroes who defended our country through the Fort Drum cannon.” But do we need that? Is there a shortage of war monuments in the country that remember these unnamed heroes? It must be pointed out that, in fact, most of the nationally sponsored monuments and memorials of World War II remember soldiers, prisoners of war, and guerrilla fighters. What is lacking are national monuments that honor and remember victims of the war. It is most ironic that civilian deaths outnumber military deaths fifteen to one, yet the state chooses to privilege the memory of the military over the noncombatants who did not choose to die in the war.

Monuments and memorials are not simply reminders of the past. The memorialization process has the potential to provide spaces for healing, symbolic reparations, and preventing the reoccurrence of violence. For contentious issues surrounding the war that remain controversial today, monuments could provide materiality to the plight of underserved groups and sectors, such as the Filipina comfort women who continue to fight for justice and recognition to this day. The fact that a comfort woman statue was built and removed in 2018 around the same area where a gigantic cannon replica will be built is insensitive and despicable.

It must also be asked what business the DENR has in developing Manila Bay as a tourist destination, mainly because this is not the first time the agency has done so. The beach nourishment project, aka the Dolomite Beach, also faced the same criticism of being untimely and wasteful of government resources. The unsightly cannon replica, Cimatu’s swan song in the DENR, is not only untimely and wasteful: it is bizarre. – Rappler.com

John Lee Candelaria is a PhD candidate from Hiroshima University, Japan. His dissertation looks at how interstate war is memorialized in Southeast Asia. He hosts PODKAS, a podcast on Philippine history, politics, and society.