Facebook Twitter Copy URL
Copied
While my Catholic school allowed me to grow in different ways, my relationship with God didn’t. Here’s why.

I attended a Catholic school for 13 years.

Having spent most of my life there — from my formative years all the way up to senior high — I inevitably built lasting friendships with my peers and created indelible memories that absolutely cannot be replicated elsewhere.

Ironically, however, the very same institution that was meant to deepen my faith led me to resent it. I can confidently attest that my Catholic school allowed me to grow in a multitude of aspects, but it had just missed the particular one it had hoped to nurture above everything else – my relationship with God.

Much like the deadpan “Everything is fine” sign that occupies the walls in The Good Place, everything was, in fact, not fine.

I’ve even come to discern that I am bound to some of my closest friends because for over a decade we collectively bore the brunt of suffocating practices that were strictly enforced under the guise of God’s will. It’s always been a tradition for the 11th graders in my school to go on the highly-anticipated juniors’ retreat. Jitters from scary rumors aside, it was a weekend that everybody looked forward to upon witnessing how life-changing it had been for most students.

Even before then, I was unconsciously already beginning to lose my connection with God. Seeing my batchmates be so moved by this special event made me expect myself to finish the same retreat with a restored inclination toward the Catholic church.

When it was finally my turn, I remembered going into each activity hopeful that it would reawaken my adoration for the Divine. I enjoyed reading the palancas I received from my family and friends, but I merely skimmed through the ones that discussed how God loved me and had a plan for me. I was unconvinced.

It was only until I emerged from the retreat feeling numb and unchanged like usual that I had rudely been made aware of my loosening grip on my religion. In a desperate attempt to salvage this, I even wore the scapular necklace we were given that weekend for months on end – foolishly thinking that a religious garment would fix everything. You can probably already guess what happened next.

From then on, I came to terms with the fact that no one weekend with the Lord could magically piece back together the puzzle of my faith that had long been shattered. But recalling my past experiences in my old school, I gathered why this continues to be the case.

We were required to pray before and after each class. Headed by the day’s designated prayer leader, every prayer more or less followed the same structure — thank God for everything He has done for us, and then ask Him to give us a productive class discussion. Although we were instructed to recite spontaneous prayers, teachers never questioned when we consistently spouted identical ones every time.

We were also made to memorize and parrot numerous prayers. Every “Hail Mary,” “Glory Be,” and “Act of Contrition” gradually turned into mere strings of empty words we monotonously regurgitated just to get things over with. Prayers eventually began to feel more like an apathetic routine rather than a genuine attempt to communicate with God.

Similarly, the very manner in which we were educated about God’s grace and the pillars of Catholicism just felt so robotic. Things were looked at from a “this is a good deed because the Church said so,” way instead of a “which route truly embodies the values God wants me to live out?” way.

I never liked how some Catholic teachings were loaded with so much abhorrence towards certain minorities, either. The scriptures insisted that the LGBTQ+ community was a disgrace to society. In pride marches, you’d even be able to catch a few conservative Catholic protesters holding up placards to persuade LGBTQ+ members to let God transform them back to heterosexuals.

They would even go so far as to call innocent pride march participants sinners. “God loves the sinner,” they would say. But why couldn’t God seem to let love flourish when it takes place between two members of the same sex? Could God truly be considered a figure of love when His teachings hypocritically emited judgment and exclusivity? 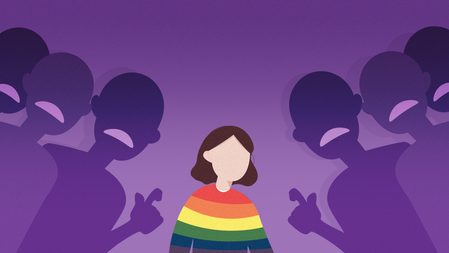 As a woman, I have always been a staunch advocate for female empowerment. However, on the opposite end of the spectrum, the Catholic church is a dominant champion of misogyny.

Divorce and abortion – two tremendously crucial women’s rights – are gravely opposed by the Church because they apparently contradict the sanctity of marriage and encourage murder. Through these stances, women have essentially been stripped of their authority to choose.

There was little room for me to challenge this back then, but it was something I thought of constantly out of frustration. Thus, I was left absorbing passages on autopilot mode for the sake of compliance. It was an arguably restrictive approach to exploring your faith.

Each year, we were obligated to donate money to a mission organization – emphasis on “obligated.” We couldn’t just donate if we wanted to, we were compelled to, so it felt less like an act of pure goodwill and more like we were being prodded to pay for a spot in heaven.

Do good, get rewarded; do the opposite, suffer consequences; repeat.

I started to wonder if religion was something I had to subscribe to in order to be considered a good person. Though the obvious answer was no, it sure as heck still implied otherwise.

Ultimately, then, my religiosity began to be towered over by a barrier of extreme superficiality that I just couldn’t seem to break no matter how hard I tried. The fear of getting punished by a higher being weaved into me the mindset that I had to do good because it was what God wanted – not because I was genuinely driven to do good deeds because it was the right thing to do.

But if faith is grounded in personal belief, why did I feel as if I was being forced to cling to it even when mine had already begun to falter?

In hindsight, though, I probably wouldn’t have resented religion as much as I do now if it weren’t instilled in me that I had to know all these dogmas and prayers to be deemed worthy of God’s love.

Although I refuse to give credence to the many prejudices Catholicism manifests, I am still aware of the warmth and belongingness it has helped create for countless individuals, and I would never denigrate that.

Nonetheless, I’m sure that returning to the Catholic faith isn’t something I’d be doing any time soon — or any time at all, for that matter.

All I ask is that Catholic schools prioritize aiding their students in establishing an authentic and fond relationship with God in transformative and liberating ways.

Cultivate their affinity for the religion in a manner that does not shove teachings down their throats and does not force them to carry out different practices without so much as having them understand their purpose. Most importantly, allow them to challenge age-old religious concepts. Only then can these schools foster a learning environment that doesn’t drive its students away from God. – Rappler.com

Juno Reyes is a 4th year Communication student from the Ateneo de Manila University and a Life & Style and Entertainment intern at Rappler. When she isn’t studying or writing, she loves to read books, bake pastries for friends and family, and collect food-themed items. You may reach her at junoreyes95@gmail.com.