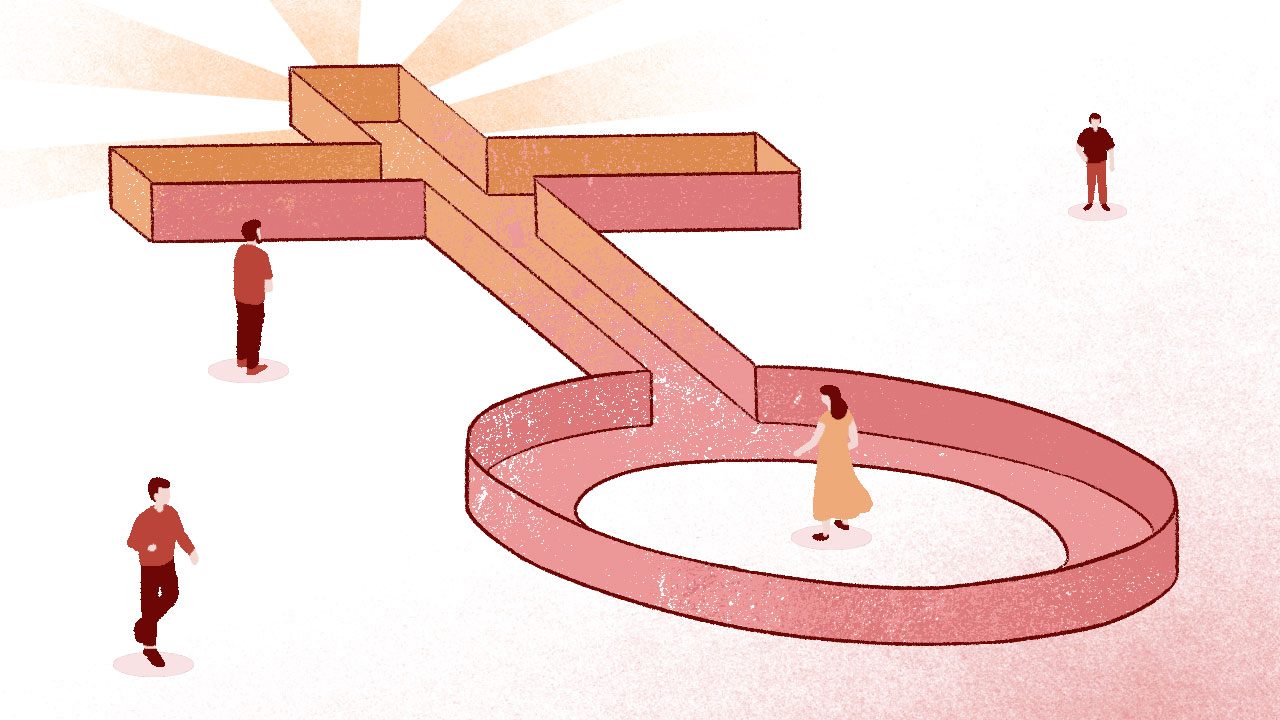 Facebook Twitter Copy URL
Copied
'Despite my mounting questions and gripes about organized Christianity, I couldn’t simply let go of my faith'

If you applied the Bechdel test – a measure of how women are represented in literature, determined by whether women characters talk to each other about something other than a man – to the stories in the Bible, it’s highly likely that it would fail. When I turn to the Bible, I can only recall a handful of women: Ruth, Eve, Sarah, Esther, and Mary, but even then, I know them in relation to the men they are affiliated with and not exactly for their story.

Meanwhile, there is no shortage of information about the men of the Bible. In fact, the Bible is actually told through the lives and viewpoints of multiple men – Adam, Abraham, Jacob, David, Solomon, Paul, the list goes on. If you think about it, the Bible is a book written by men for men. In fact, Christianity is born out of a generation that operated on male superiority, where men dominated all aspects of life: politics, economy, religion, and even the home.

This treatment towards women translated into the teachings of the Church, and sadly, its treatment of women even in the modern day. In a patriarchal society like the Philippines, these teachings only reinforce the so-called superiority of men to women, causing many harmful effects.

[OPINION] When religion blames the victim

Being taught to come second

In the Creation story of Genesis,  God gave Adam a “suitable helper” in the form of Eve. Although the original word in Hebrew for the word “helper” meant helping one another as equals, the teachings of the Church implied the same thing: next to men, you come second.

Being raised in a Bible-believing household and Church, I was repeatedly told that I should aspire to be a Proverbs 31 woman: full of wisdom, strong, and capable. As much as that sounded encouraging, I later on discovered that these traits were closely tied to being a wife. A Proverbs 31 woman is quite literally known as The Wife of Noble Character, as seen in verses 10-31.

It doesn’t end there. “Wives, submit to your husbands as to the Lord. For the husband is the head of the wife as Christ is the head of the church. Now as the church submits to Christ, so also wives should submit to their husbands in everything,” Ephesians 5:22-23 (NIV), one of the most popular verses used in sermons, reads. This is supplemented by multiple verses like Titus 2:5, 1 Corinthians 14:34-35, and 1 Timothy 2:11-12 that all call for the submission of a woman to their husbands to uphold God’s design for marriage.

Aside from being taught how to save souls and become a better person through following a set of rules, I was being taught how to become a good wife. The standards of a good wife were simple: be a good homemaker, honor and submit to your husbands, and save your virginity for the man you marry. This was followed by a series of multiple microaggressions that came in the form of being told to dress modestly so as to not let our fellow brothers and sisters stumble, being forced to endure the presence of an abuser in the name of forgiveness, and not being given significant leadership positions (women were not allowed to be pastors), among many others. I was told to hold my tongue and submit to authority.

Outside of being a wife and a homemaker, I often asked myself: what else could I be? Who was I outside of being someone else’s? After all, when the women of the Bible are not being used for the character development of men, not much is known about them.

Discovering one’s identity is no easy feat as one goes through adolescence, but it is made even more difficult once you live in fear of falling short of people’s expectations. After being programmed into being careful of my every move as a woman trying to obey God, I lived my life in constant paranoia. Am I wearing something too revealing? Am I disrespecting authority by being too opinionated? Am I being too loud? Am I sinning for hanging out with a guy alone? Do I lack forgiveness? In my head, the problem was always me. This caused me to walk on eggshells, especially with anyone male, as I was always afraid of causing them to stumble. In other words, I felt trapped in my femininity as I tried to be the woman I thought God wanted me to be. I was too scared to disagree, so I forced myself to believe that the truth can be painful sometimes. God’s commandments would not always be to my liking, I told myself. I had to accept the harsh reality that to be a woman meant to make myself less so that I could cater to men.

But the tides changed when I turned 17, when I was introduced to the principles of feminism and the dangers of patriarchy. I began to realize that I was being subjected to double standards while men were often given a free pass. Upon these realizations, I tried to figure out how this would impact my faith.

I increasingly started to disagree with the teachings of the Church, especially when it comes to their obsession with “bedroom morals” such as same-sex marriage, premarital sex, and abortion, while lacking in social action to address injustice. Yet despite my mounting questions and gripes about organized Christianity, I couldn’t simply let go of my faith. So, I turned to the person who was who was the sole basis of my faith in the first place: Jesus. Speak, even when your voice shakes

Jesus did not seem to be a fan of the patriarchy, with some experts saying his approach towards them was “revolutionary,” especially during his era where women were blatantly regarded as second-class citizens.

In the few times the Gospel mentions Jesus’ interactions with women, He treated them as His equals: In John 4:27, He addressed them directly while in public, which was unusual for a man to do; in John 4:7-26, He talks to the sinful Samaritan woman with love instead of the expected condemnation; in Luke 8:1-6, we see Him supporting womens’ roles in His ministry as they traveled with Him; in three of the Gospels (Luke 8:48; Matt. 9:22; Mark 5:34), He is said to have healed a woman with a bleeding disorder, the list goes on.

I would take up all the space here if I explained how the Church became patriarchal in structure, but it is clear that Jesus Himself honored, uplifted, and even empowered the women in His life. For Christians who are so set on following the footsteps of Jesus, it might be time for both the Church and Christians alike to revisit the standards they’ve imposed on women and look through them with the eyes of Jesus. Luckily, some Christian churches have began to do just that, as they give women more leadership positions and empower them as individuals.

It is still my personal dream to become a wife and eventually, a mother. But outside of that, I am still allowed to be a person whose worth isn’t tied to those roles. There is nothing wrong with wanting to be a full-time homemaker, just like there isn’t anything wrong with wanting to focus on one’s career or focusing on other roles outside of ones that cater to men’s needs. You are an individual first whom God loves and honors before any of the other roles you are expected to fulfill.

For Christian women like me who felt like they come second, I’m here to tell you that in the sight of God, we are all equal. You are allowed to use your voice. You are allowed to take up space. So speak, even when your voice shakes and knees tremble. Jesus would have expected no less from you. – Rappler.com

Samantha Onglatco is currently a junior Communications student at the Ateneo de Manila University and a Lifestyle and Entertainment intern at Rappler. In her free time, she likes to read, binge-watch Korean dramas, and listen to K-pop. You can reach out to her at samantha.onglatco@obf.ateneo.edu.