Has change really come? Misleading graphs and how to spot them Facebook Twitter Copy URL
Copied
Next time you encounter a graph, don’t take it at face value. Examine the variables, scrutinize the labels, check the sources, and understand the message – all before you click 'share'.

The Duterte government was elected into office on the promise that “change is coming.” With one year already gone, has change come indeed? How can we tell?

To show signs of change, some government agencies have resorted to the use of statistics, figures, and graphs.

Graphs are particularly useful: our brains evolved to process visual information best, and graphs allow us to digest otherwise complex pieces of information.

But in this article, we show examples of graphs made by the Duterte government that tend to distort the truth, mislead the public, and report false progress.

As we go through these examples, we uncover the various ways by which graphs can be made to lie. At first glance, you might think that the murder and homicide cases have indeed tapered off in recent times. But the line graph dipped at the end mainly because the data for 2016 was split into two periods: January to June, and July 1 to August 3.

A graph by the Philippine News Agency, tagged under the #RealNumbersPH campaign, also committed the same mortal sin.

No doubt both graphs aimed to show progress in the President’s war on drugs: fewer murder and homicide cases reported, and more drug cases filed.

But “time series” graphs like these work best when successive data points are comparable.

Consider, for example, the graph you find in your monthly Meralco bill. How can you track your monthly electricity consumption if the graph lumps together daily, monthly, and yearly data? Not so well, right?

In the same way, how can we track the drug war’s progress if we look at periods of uneven intervals?

Distorted scales are the oldest trick in the book: not only do they misrepresent the underlying data, but they also defeat the very purpose of visualization. Rather than reveal the truth, they conceal it.

False progress can also be shown by “cherry-picking,” or selecting favorable data points while omitting unfavorable ones.

A perfect example is the Department of Tourism’s infamous graph that was shared (and bashed) widely on Facebook.

As found in the tourism department’s accomplishment report, these data support the claim that “the tourism industry has become a bright spot of the Philippine economy during the first year of the Duterte administration.”

They obviously wanted to compare the tourism sector’s performance in the first year of former president Benigno Aquino III and President Rodrigo Duterte.

So it turns out that tourism revenues jumped more impressively in Aquino’s first year than in Duterte’s first year – a fact conveniently hidden by the tourism department’s cherry-picked graph.

Finally, graphs can be made to lie by comparing actual and hypothetical data.

Figure 4 below shows a bar graph made by the Bases Conversion Development Authority (BCDA) during the inauguration of “Build, Build, Build” in November 2016. It shows the percent share of infrastructure spending to GDP across different administrations. 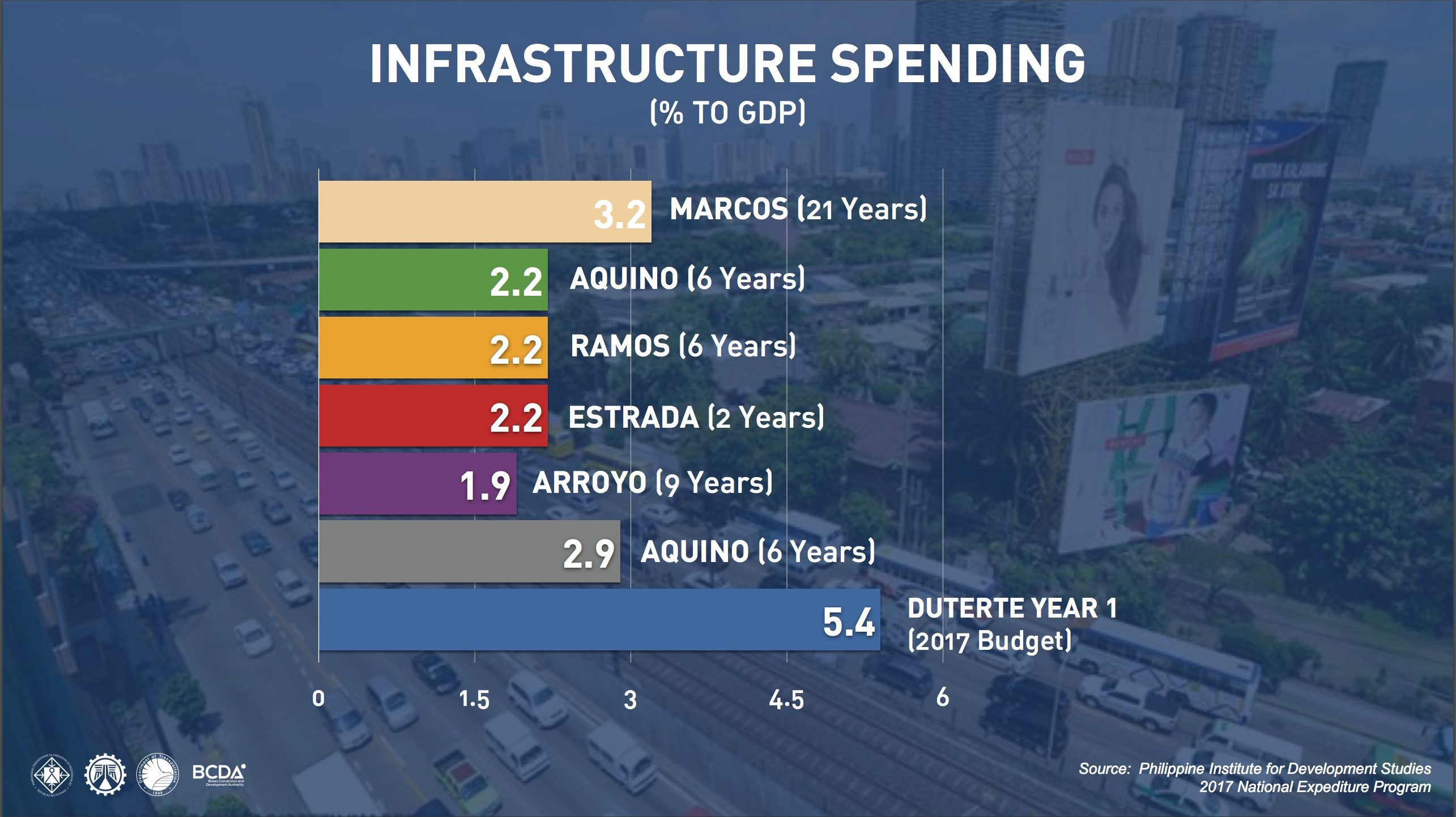 This graph is misleading on at least 3 fronts:

Second, the graph also distorts scale by lumping the average infrastructure spending in each of the 5 previous administrations, and data for a single year under the Duterte administration.

Third, it cherry-picks the data by hiding the variations in infrastructure spending over the past 4 decades. The original graph (which I traced to a 2013 paper by the Philippine Institute for Development Studies) presented the entire gamut of yearly data across administrations, not just the averages across them.

The Department of Finance also compared actual and hypothetical figures in a “cost benefit analysis” infographic it shared on Facebook. Figure 5 depicts $33 billion worth of “benefits” outweighing the $5.5 million cost of the President’s foreign travels.

Although not strictly a graph, this visual comparison is no less troubling: it compares promised or pledged loans and aid from China and Japan with actual travel expenses.

Following the online backlash it received, the finance department replaced it with a more detailed graphic.

Beware of misleading graphs and figures

In this “post-truth” era filled with “alternative facts,” perhaps our best defense is the widespread use of statistics, data, and graphs.

But as the examples above show, graphs are not foolproof: they can be just as easily used to distort the truth, mislead the public, and report false progress.

If change has really come, then the data should speak for itself, and not rely on any graphical sleight of hand.

It’s bad enough that the government is the source of all these “alternative facts.” But with so many Filipinos spending so much time on social media, the virulent spread of these graphs online makes them all the more dangerous.

So next time you encounter a graph, don’t take it at face value. Examine the variables, scrutinize the labels, check the sources, and understand the message – all before you click “share.”

Only with a skeptical eye will we be able to know whether or not change has really come. – Rappler.com

The author is a PhD candidate at the UP School of Economics. His views are independent of the views of his affiliations. Thanks to Kevin Mandrilla (UP Asian Center) and Adrian Mendoza (UP School of Economics) for valuable comments and suggestions. Follow JC on Twitter: @jcpunongbayan.