[ANALYSIS] Why free-falling inflation is not all good 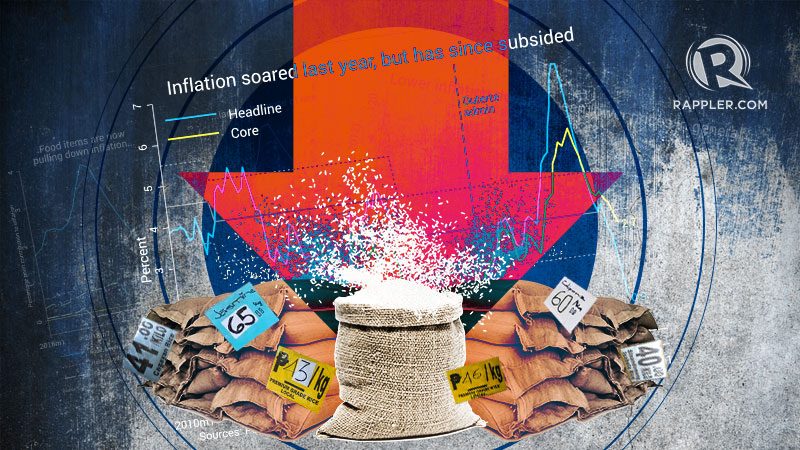 Facebook Twitter Copy URL
Copied
A sharp drop in inflation is not an unalloyed boon. As they say, keep everything in moderation.

In case you didn’t notice, inflation – which measures how fast prices are rising – has been free-falling in recent months (Figure 1).

Last month it dropped to a mere 0.9%, the lowest since May 2016 or shortly before President Duterte came into office.

Dropping inflation might seem like an unalloyed boon for many. Yet there are at least 3 reasons why this is not necessarily the case.

First, lower inflation doesn’t mean prices in general have similarly dropped. Only certain food items, such as rice, have deflated.

Second, the plummeting of rice prices – which accounts for lower inflation in large part – could spell doom to our rice farmers, poor as they already are.

Third, inflation of 0.9% is lower than what the government targeted. Could this be a manifestation of slower economic activity?

Although inflation has subsided a lot from last year, we don’t want it to be too low either. Inflation has subsided partly because of a mere technicality called the “base effect.”

Remember that inflation climbed steadily last year until it reached 6.7% in September and 6.8% in October.

Figure 2 below shows that prices have stabilized since then. Because inflation is the percent change of prices from the same period last year, it’s no surprise that inflation has recently dropped. Let’s grant that some goods have seen significantly lower prices recently. Chief among these would be food and non-alcoholic beverages.

But if you drill down further it’s really about rice, whose retail prices have dropped by a sizable 8.9% from last year.

Other food items have become cheaper since last year, including bread and cereals (6%), vegetables (4.7%), sugar (4.1%), and corn (4.1%). But since these items amount to a small portion of the food basket, their contribution to the decline of overall inflation is just as small. Rice still takes the big slice.

By contrast, food and non-alcoholic beverages take up 38% of the overall basket of goods, while rice alone takes up a fourth of that food basket. Hence, one might expect to see these two components pulling down inflation the most (Figure 3). You might reasonably attribute the plummeting of rice prices to the Rice Tariffication Act signed by Duterte last Valentine’s Day.

Although the law is certainly a boon to rice consumers – who comprise virtually all of us – it has threatened the livelihood of our local rice farmers, who are some of our poorest, most economically vulnerable workers. (READ: Plummeting rice prices: How will our rice farmers cope?)

Lastly, it’s worth noting that an inflation rate of 0.9% is well below the government’s target of between 2-4%.

As much as it can, the government avoids episodes of very high inflation. We saw last year that this tends to erode people’s “purchasing power.” With the same budget you leave the grocery with a lighter bag or leave the gas station with less gas in your tank.

At the same time, the government also avoids episodes of very low inflation.

If inflation reaches zero, for example, it means prices are not moving at all. This might mean people throughout the economy are not spending nearly enough on goods or services as before, and this could result in substantially weaker economic growth. Wages might also stagnate.

Negative inflation, also called “deflation,” presents its own set of problems, but we’re not there (yet).

Sure, we need more data to confirm inflation of 0.9% is symptomatic of weak economic growth.

“Core inflation,” which excludes items with volatile prices like food, is still at 2.7% and firmly within the government’s inflation target band (see the blue line in Figure 1). If core inflation dips to below 2%, we might begin to worry in earnest.

Nonetheless, data do show anemic economic growth amid plunging inflation. Gross domestic product or GDP growth two quarters ago clocked in at a disappointing 5.5%. By contrast, Duterte started his term with growth in excess of 7%. (READ: Dismal growth: Why is the PH economy losing its momentum?)

Free-falling rice prices could also endanger one particular sector in our economy: agriculture. Last quarter it dismally contributed less than 1% of overall growth.

There’s a Goldilocks zone where inflation targeting is concerned.

To be fair, keeping inflation within this Goldilocks zone can be rather tricky. Even the previous administration had a hard time doing so, as is apparent in Figure 1.

In any case, just keep in mind that a sharp drop of the inflation rate is not an unalloyed boon. As they say, keep everything in moderation. Beware too much of a good thing. – Rappler.com