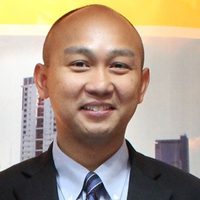 This year’s results from the World Competitiveness Yearbook indicate a slight slippage for the country—from a ranking of 41 to 43 (out of 59 countries in the annual ranking study). In part, these results reflect data on the previous year’s economic performance, and so it still mirrors the challenges related to the external economic environment faced by the country in 2011.

Nevertheless, reform areas point to improvements that have begun to pay off in terms of more positive business perceptions, and perhaps soon also in terms of hard economic numbers.

The country’s economic performance factor fell from a 2011 rank of 29 to a rank of 42, the only decline among the four broad competitiveness indicators covering economic performance, government efficiency, business efficiency and infrastructure. A major factor here is that economic growth dipped from 7.6% in 2010 to 3.7% in 2011.

The country’s international trade indicator also took a tumble in 2011 from a ranking of 18 to 55—by far the most dramatic of all the changes in ranking affecting the Philippines in the study.

These changes should be interpreted with caution, however. Often, macroeconomic indicators are subject to high volatility which may be less directly linked with policy choices, and the indicators themselves are subject to adjustment and revision over time.

Nevertheless, most economists concede that the dip in international trade was caused by the global economic slowdown and the fragility of the global economy in recent years. Preliminary figures from WTO showed that the world export growth (in terms of volume) declined to 5% in 2011, following an initial strong rebound of 13.8% in 2010.

While the global financial crisis in 2008-2009 triggered the first wave of the global slowdown, subsequent shocks have since sent a chilling effect on international trade, including the Japanese tsunami and earthquake, Thailand’s major flood and the still ongoing public debt challenges faced by a number of industrial countries, notably Greece.

In the Philippines, the latest figures from the National Statistics Office show that the trade-in-goods deficit widened from US$3.4 billion in 2010 to a staggering $12.2 billion in 2011 due mainly to the contraction of export receipts by 6.9% and expansion of import expenditures by 10% in the full year 2011. The lackluster export performance was driven by the marked decline in exports of electronic products from $32.5 billion to $25.2 billion.

In his presentation at the Asian Institute of Management last month, Asian Development Bank Senior Country Economist Norio Usui connected a lack of diversity in the traded goods sector and overreliance on services, particularly the Business Process Outsourcing sector, to a growth pattern that tends to be much more vulnerable to shocks.

Specifically, he pointed out that the concentration on electronics—which made up 37% of exports last year—leaves the Philippines more vulnerable to external conditions, such as the continued economic malaise effecting trading partners in Europe and the United States.

The country climbed 5 notches to rank 32 compared to 37 in the previous year under the government efficiency factor. This was due to significant improvements in the public finance and institutional framework subfactors, posting 9 and 8 notches up from last year.

To illustrate, the government budget deficit declined to P197 billion from P314 billion in 2010, as a result of improvements in revenue collection combined with budgetary reforms that generated public sector savings. These reforms have been rewarded by an upgrade in outlook from “stable” to “positive” by Moody’s this week, taking the country closer to the coveted “investment grade” rating.

However, some infrastructure indicators such as education, health and environment, and scientific infrastructure remain perennially low. Efforts to address these issues are already underway like the much anticipated take off of several PPP projects.

For this year, eight PPP projects amounting to P132.6 billion are for roll out. These include among others the PPP for School Infrastructure Project, LRT 1 South Extension, and Vaccine Self-sufficiency Project Phase II.

Recently, the government announced the creation of a P25-B infrastructure fund dubbed as the Philippine Investment Alliance for Infrastructure (PInAI) to further boost infrastructure projects. The fund will be managed by Australia’s Macquarie Infrastructure and Real Assets with the Government Service Insurance System (GSIS) as the lead investor. The latter is set to put in $300 million for PPP initiatives on transportation, energy, power, water, environment, and communications sectors.

While these initiatives are already pipelined, their actual translation into improvements in the country’s competitiveness scores—notably on the hard indicators (as opposed to perceptions based indicators)—could take some time to manifest. (A quick snapshot of four PPPs, for example, suggests that the actual construction for most of them will not take place until 2013-2017.)

Given these timelines, it’s likely that more positive investor sentiment and favorable business perceptions will take place first. Indeed, the number of perception-based indicators in the World Competitiveness Yearbook the 15 biggest improvement criteria grew from five in 2010 to ten in 2011 and 2012.

Catching up in Asia

What might matter more for the Philippines is not its overall rank, but how it fares relative to other countries in the Asian region.

On the overall competitiveness ranking, the Philippines still lags behind its neighbors. On closer inspection of the results, however, other Asian economies suffered similar economic shocks and thus also slipped to lower ranks out of the over-all sample of countries.

While the Philippines dropped two notches on the over-all competitiveness indicator, China, Thailand, and Indonesia dropped by 4, 3 and 5 notches respectively. Many countries in Asia took a hit from the poorer international trade environment.

By 2012, however, the results displayed marked improvements in government efficiency and business efficiency—the country ranked higher than China, Japan, and India in the government efficiency indicator, and it ranked higher than China, Japan, and Indonesia in the business efficiency indicator. The Philippines also experienced a slight improvement in terms of infrastructure as it relinquished its position at the bottom to Indonesia.

The commitment of the current administration to clean up the government as well as improve infrastructure and other investments (even though delayed) seems to be bearing fruit mainly in terms of investor and business sentiment at this stage.

And this is reflected by a spate of recent reports and articles on the Philippines’ competitiveness and development prospects. The Financial Times recently published an article describing how the country may have “turned a corner,” highlighting reforms such as the significant reduction of international debt, the continued increase in remittances, the exponential growth of call centers, progress in reducing tax evasion, the restoration of rice self-sufficiency, and the performance of the stock market.

HSBC Global Research also predicts that the Philippines is set to become the 16th largest economy in 2050 using the criteria that includes income per capita, rule of law, democracy, education, and demographic change. In addition, the Philippine competitiveness survey conducted by JETRO shows that the country bested China, Malaysia, Thailand, India, Vietnam, Indonesia and Myanmar in the category of business or investment decision making.

For these reforms to finally create a full impact on the country’s economic and competitiveness outcomes—which are components of its global ranking—the government needs to stay the course until a critical mass of mutually-reinforcing positive investor sentiment and actual robust investments and economic outcomes takes full effect. – Rappler.com 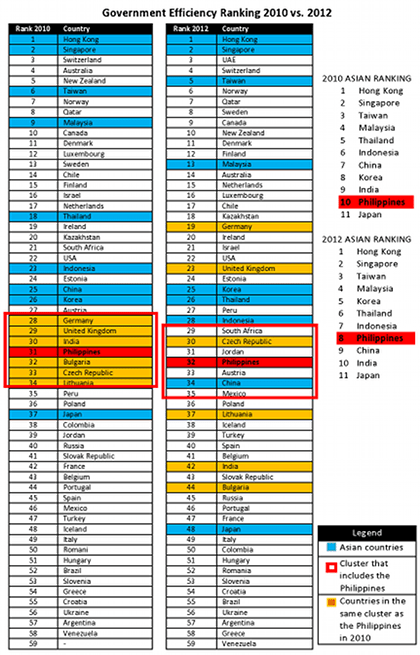 (The AIM Policy Center collaborates with the International Institute for Management and Development (IMD) and over 54 partner institutions all over the world to produce the World Competitiveness Yearbook each year since 1989. A total of 59 industrialized and emerging market economies are ranked according to competitiveness factors spanning four main sets of indicators: economic performance, government efficiency, business efficiency and infrastructure. The exercise draws on hard economic data from international and national organizations, as well as an annual executive opinion survey with well over 5000 respondents. This article was produced as part of ongoing research on how economic competitiveness could help promote more inclusive economic growth and development. The research team includes Steve Almeda, Joel Bancolita, Ivy Baysic, Jed Fix and Ailyn Lau. For questions and comments, please send your email to policycenter@aim.edu or visit http://policy.aim.edu.)

Click the links below for more opinion pieces in Thought Leaders.