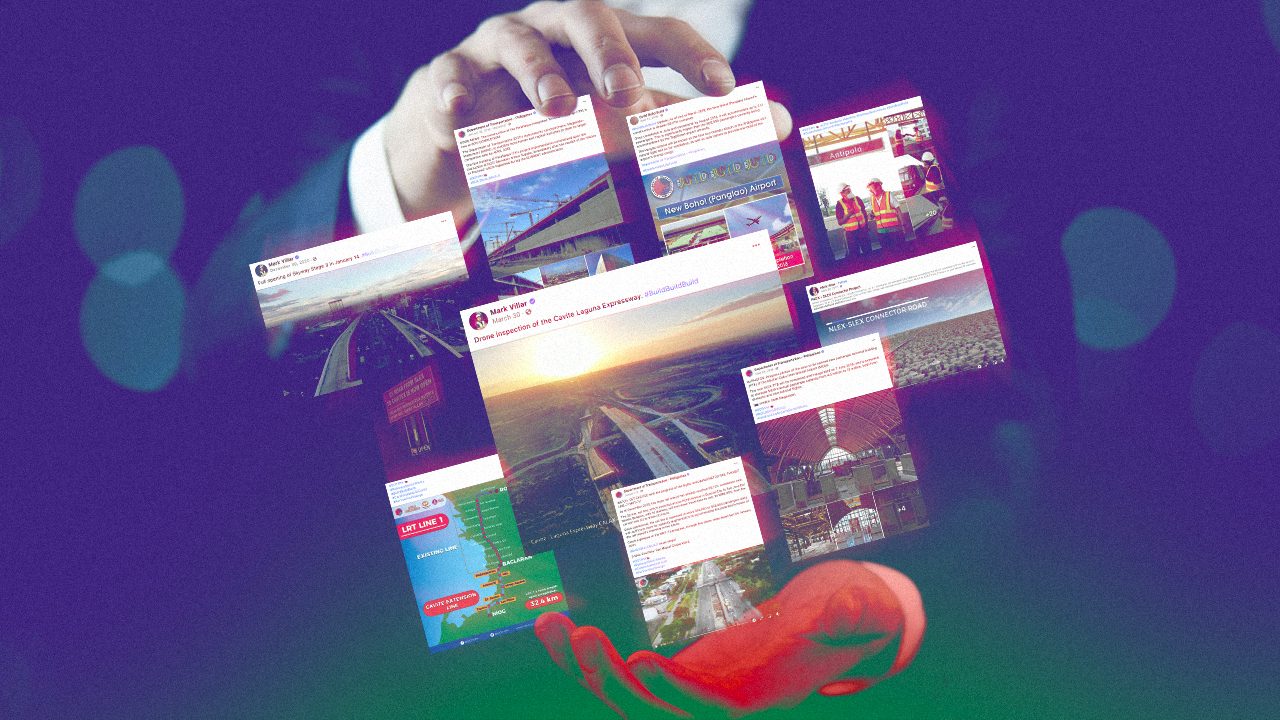 Facebook Twitter Copy URL
Copied
With 75 original projects in the pipeline, BBB was expected to bring about no less than a 'golden age of infrastructure,' but it has turned out to be a dud

Build, Build, Build (BBB) is often touted as the “centerpiece” economic program of the Duterte administration. In 2017, when it was launched, BBB was envisioned to spend at least P8.4-trillion worth of new infrastructure projects nationwide, from roads, bridges, airports, etc.

With 75 original projects in the pipeline, BBB was expected to bring about no less than a “golden age of infrastructure” – not unlike the one during the Marcos dictatorship.

To begin with, infrastructure spending on this scale proved much more difficult than anticipated. Agencies at the frontlines, like the Department of Public Works and Highways (DPWH) and the Department of Transportation (DOTr), failed to solve chronic problems like lack of absorptive capacity, resulting in delayed spending and underspending.

While government officials boast they’ve spent on infrastructure about 5% of GDP yearly, that’s actually lower than their original lofty targets. At first they even aimed at 7.3% by 2022.

What they call “spending” also typically refers to budget allocations rather than actual spending or disbursement. In fact, government’s ability to disburse funds for infrastructure has fallen short of their ability to obligate or contract out such funds. (READ: Why we can’t Build, Build, Build our way out of this pandemic)

To make up for the government’s abysmal lack of progress, government officials simply revised their list of BBB projects. Of the original 75 flagship projects, only about half remain today. (READ: The moving goalposts of Duterte’s Build, Build, Build)

Specifically, they modified the list of BBB projects in three main ways:

First, they dropped big, unfeasible projects with smaller, more doable ones. For instance, three ambitious bridge projects (connecting Luzon and Samar, Leyte and Surigao, and Cebu and Bohol, respectively) turned out to be wholly unfeasible and simply had to be shelved.

Second, officials broadened the definition of infrastructure to go beyond the usual public works and include, say, digital infrastructure (comprising projects like the Philippine Identification System and National Broadband Program). In the pandemic, they even inserted the Virology Science and Technology Institute of the Philippines into BBB.

Third – and perhaps most insidiously – they simply took to slapping the name of BBB on projects they merely inherited and continued from previous administrations.

Here are 10 projects of previous administrations that the Duterte administration casually and conveniently folded into BBB, in what can be rightly called a grand exercise in credit-grabbing:

Credit-grabbing: In late 2020, DPWH Secretary Mark Villar posted on Facebook that the full opening date of Skyway Stage 3 was set on January 14, 2021, and appended to his post the hashtag #BuildBuildBuild. During the inauguration, Duterte himself said, “The successful completion of the Skyway is a testament to the efficiency, reliability, and sustainability of our Build, Build, Build Program.”

In fact: Skyway Stage 3 was launched by the Aquino administration back in January 2014. Being a public-private partnership or PPP – a financing mode initially shunned by Duterte’s economic managers – this project was built using private sector funds.

Credit-grabbing: The extension of the LRT Line 2 up to Antipolo was described in an article by the Philippine Information Agency as “part of the vast ‘BUILD, BUILD, BUILD’ infrastructure program of President Duterte’s administration.” On numerous occasions the project has also been tagged on social media with the hashtag #BuildBuildBuild.

In fact: This project was approved by the National Economic and Development Authority (NEDA) Board way back in 2012, and was initially expected to be finished by the first quarter of 2018. Curiously, this project was not even in the original master list of BBB, but somehow found its way into the list’s latest version.

In fact: This PPP project was greenlit by the Aquino administration as early as January 2013.

Credit-grabbing: Upon the opening of the C5 South Link Expressway, a number of netizens posted photos of posters and banners purporting that the road project was “an initiative of President Rodrigo Roa Duterte” and “DPWH Secretary Mark Villar.”

In fact: Previously known as the Cavitex-C5 South Link Project, this expressway was approved by the Aquino administration and its groundbreaking happened in May 2016.

Credit-grabbing: In January 2021 the DOTr posted a drone video of the MRT-7 project being built mainly along Commonwealth Avenue in Quezon City, saying that “#BUILDBUILDBUILD never stops!” Recently the MRT-7 was named a BBB flagship project, although it wasn’t in the original BBB master list.

In fact: The project, currently being built by San Miguel Corporation, was initiated way back in 2004. Its groundbreaking happened in April 2016.

Credit-grabbing: Back in January 2018, the DOTr posted on Facebook that “the construction of the Parañaque Integrated Terminal Exchange (ITX) is now at 60% COMPLETION!” The post ended with #BUILDBUILDBUILD. Meanwhile, in 2018, the official Facebook page of Build, Build, Build said that “The PITX is a priority project under the current administration’s ‘Build Build Build’ Infrastructure Program.”

In fact: PITX is another PPP project of the Aquino administration. It’s part of the Integrated Transport System (ITS) that was the subject of Executive Order 67 in 2012. The project was awarded to MWM Consortium in 2015, but construction didn’t start until October 21, 2016.

Credit-grabbing: In 2018 the Duterte government opened the new passenger terminal building of the Mactan Cebu International Airport. It’s been marketed as part of BBB even if it’s not even part of the original master list of projects.

In fact: This is yet another PPP project of the Aquino administration, which secured for the government a P14.4-billion premium from the consortium that implemented the project. Its groundbreaking happened in July 2015.

Credit-grabbing: Various social media posts have branded the New Bohol Panglao Airport as a BBB project. It was even included as a flagship project in the original master list of BBB.

In fact: The NEDA Board approved this project as early as 2003, but it wasn’t until 2013 that it got financing through the help of the Japan International Cooperation Agency. It was completed and inaugurated in November 2018.

Credit-grabbing: The extension of the LRT Line 1 all the way to Bacoor, Cavite was not included in the original list of BBB projects in 2017. But since then it has been included under the BBB banner.

In fact: This project has been derailed for decades chiefly due to right-of-way issues and the relocation of informal settlers. It was in September 2015 when a consortium consisting of Ayala Corporation, Metro Pacific Investments Corporation, and Macquarie Group finally won the LRT-1 extension deal. Construction started in 2017.

Credit-grabbing: On March 20, 2021, Secretary Villar posted on Facebook a drone shot of the Cavite-Laguna Expressway (CALAX), again appending #BuildBuildBuild at the end of this post.

In fact: CALAX is another PPP project of the Aquino administration, awarded to Metro Pacific Investments Corporation in 2015. It was never part of the official BBB master list, but that hasn’t prevented the Duterte government from claiming it as a BBB project.

The above list is far from definitive. Many other projects have been falsely, brazenly, unfairly tagged as part of BBB over the years.

Duterte officials claim that, were it not for their efforts, such projects would continue to be delayed and wouldn’t come to fruition. Meanwhile, others argue that infra projects are infra projects, and we should celebrate them regardless of who conceptualized or finished them.

But the BBB program is identified as the defining economic program of the Duterte administration, and officials promised to build new, exciting infrastructure projects on top of the ones that were well on the way to completion.

As the Duterte government winds down, it will be crucial to hold Duterte and his men to their promises when they came into power. That includes setting the record of Build, Build, Build straight. – Rappler.com

JC Punongbayan is a board member and Zy-za Suzara is the executive director of the Institute for Leadership, Empowerment, and Democracy (iLEAD). Thanks to Rupert Mangilit and Niño Versoza for comments and suggestions.