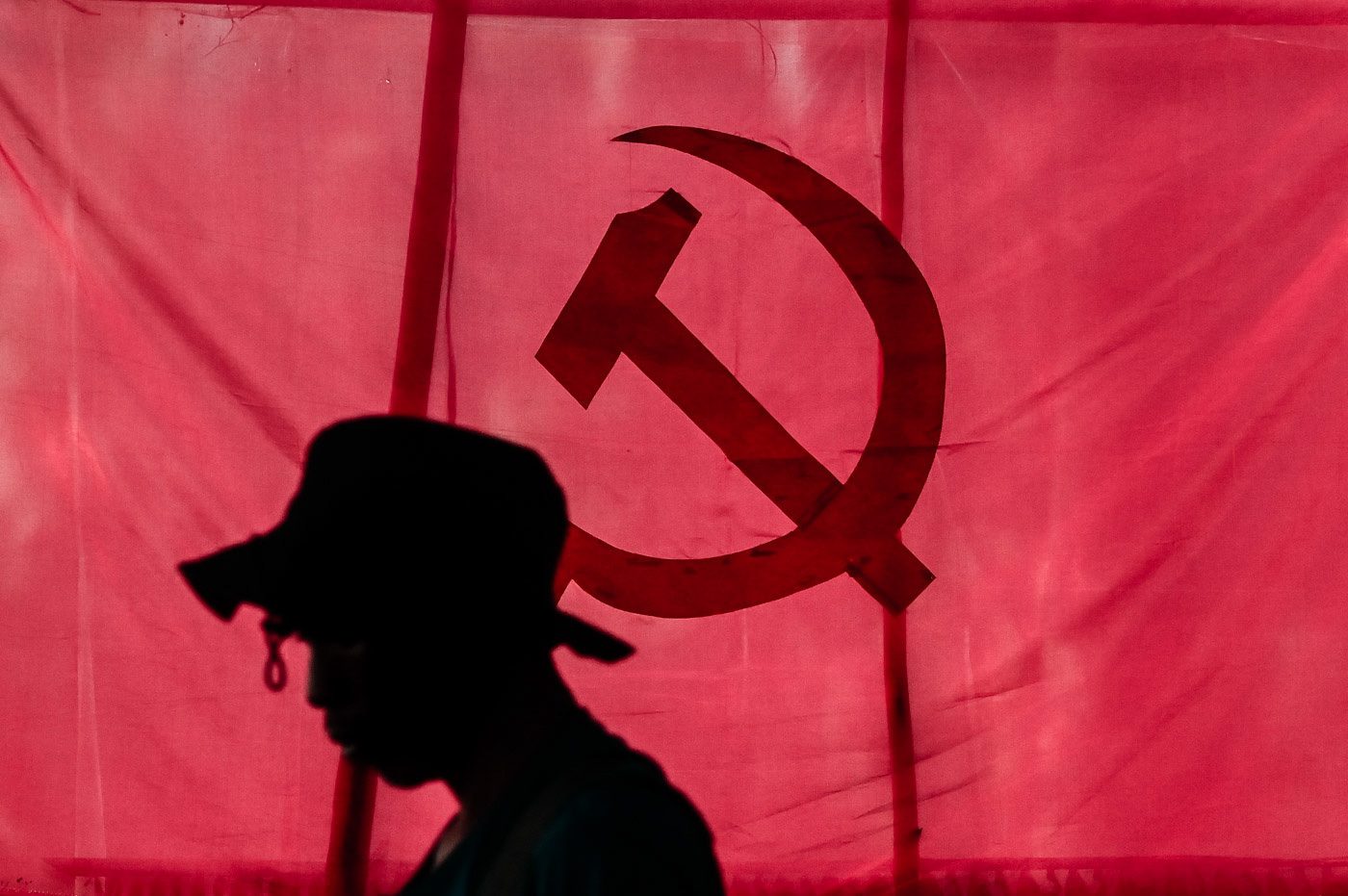 Armed members of the New Peoples Army-Melito Glor Command gather on a clearing in the lower Sierra Madre mountains in Quezon Province, south of Manila, to celebrate the 50th year founding of the Communist Party of the Philippines on December 26, 2018. Photo by Alecs Ongcal/Rappler

Facebook Twitter Copy URL
Copied
'Were their acts committed to sow and create a condition of widespread and extraordinary fear and panic among the populace? No.'

Is the CPP-NPA an organization, association, or group of persons? Yes.

Doing away quickly with the first element, the Court held that there is no necessary number of individual members needed to compromise an organization, association, or group. An organization, however, connotes a formal structure or hierarchy within the ranks whereas an association is more informal. The petitioner was able to establish based on the testimony of its witnesses that the CPP-NPA is indeed an organization with nationwide membership organized into an “established, hierarchical, and organizational structure.” Orders and directives are given by higher ups and a Central Committee exists within the group. The first element is thus satisfied.

Was the CPP-NPA organized for the purpose of engaging in terrorism? No.

The second element is not so easily answered. Was the CPP-NPA organized for the purpose of engaging with terrorism? The Court turned to the definitional elements of “terrorism” under the HSA, which is through the commission of certain specified acts which by their doing would be “thereby sowing and creating a condition of widespread and extraordinary fear and panic among the populace, in order to coerce the government to give in to an unlawful demand.”

The Court has to answer not only the purpose behind the creation of the CPP-NPA, but whether the acts committed by its members as alleged by the petitioner would qualify as “terrorist” acts.

Regarding the purpose of the organization, the Court relied upon the Constitution of the CPP, specifically the “The Program for a People’s Democratic Revolution” and “Our Specific Program” attachments. The ultimate goal of the CPP is to achieve a People’s Democratic Revolution summed into a Ten-Point Program. If the program of the CPP is construed as the purpose for being of the CPP-NPA, then it is clear from the foregoing that it was not established for the reason of engaging in terrorism.

The Court, however, makes note that the employment by the CPP-NPA of an armed struggle and violence in order to achieve their ideological purpose has given rise to the question at the very heart of the petition. The creation of the NPA by the CPP as its “mighty sword of the people in a protracted people’s war against foreign and feudal domination” solidified the Party’s approval of violence as a means to achieve their purpose, but the Court made clear that the means to meet a purpose are not equal to the purpose itself.

The evidence against the CPP-NPA

Here, the Court whittled down significantly the scope of its assessment to only nine incidents of atrocities allegedly committed by members of the CPP-NPA against civilians. Refer back to the alleged acts raised by the petitioner. The 17 witness testimonies and documentary evidence provided by the petitioner sought to substantiate claims for many alleged actions of the CPP-NPA throughout the decades of its operations, but some were committed before the enactment of the HSA, others such as the crimes against PNP and AFP personnel were not sufficiently alleged and proved. Hence, only nine recent acts committed against civilians between 2019 and 2020 were considered by the Court.

From the evidence presented, there is no doubt that the acts specifically assessed indeed fell under the crimes defined under the Revised Penal Code and other special laws to satisfy the enumeration under Section 3 of the HSA to be comprising terrorism. Specifically, these are the crimes of rebellion, murder, kidnapping, abduction, arson, and serious illegal detention.

But the Court finds issue with the authorship of the acts, which have been established as facts and as crimes. The eyewitness accounts credited the CPP-NPA with the attacks based on the manner and mode of dressing of the perpetrators. Black garb and black boots are not conclusive identification of CPP-NPA members as there is no evidence that this is an official uniform. The Court appreciated that specifically in Mindanao, where a significant portion of the acts examined occurred, there are other armed groups besides the CPP-NPA that have been known to sport similar attire while also carrying firearms. The claim also of “personal knowledge” by the witnesses, either as former members of the CPP-NPA or through personal relationship with the perpetrators does not equate to the acts committed being official acts of the CPP-NPA pursuant to an official party directive. Were the acts committed to sow and create a condition of widespread and extraordinary fear and panic among the populace? No.

The Court had to resolve the vagueness of the terms “widespread” and “extraordinary to properly qualify this element. There being no additional criteria provided within the law, the Court based its interpretation on the common and regular use of the words. To satisfy this element, the fear and panic caused to the general public across the entire Philippines must be pervasive and prevalent, exceptional and remarkable.

The Court found that none of the nine incidents assessed could be said as having caused “widespread and extraordinary fear and panic” among the population of the Philippines. While not downplaying the violence, loss of lives and property, and tragedy of these events, the Court was constrained to measure them by the definition provided by the law. These occurrences are better described as pocket occurrences of a sporadic nature with a limited geographic reach – far from the acts described under the HSA.

Significantly, the Court compared these “hit-and-run” acts of violence to the chosen battle strategy of the CPP-NPA – guerrilla warfare. But it held the conclusion of experts in the developing war on terrorism that guerilla warfare is not synonymous with terrorism.

Of the acts committed by the CPP-NPA that the petitioner put forward for the Court’s review, he only indicated one which could satisfy this definitional element, would be the Plaza Miranda Bombing of 1971. The purpose of the bombing, according to witnesses to create an atmosphere of social unrest, which it surely did. The killing and injuring of many at a major national political event was caught on camera, making major headlines across the country. The fear and panic was widespread and extraordinary. But the bombing had occurred prior to the enactment of the HSA and thus could not be qualified as a terrorist act under the law.

Lastly, were the acts committed in order to coerce the government to give in to an unlawful demand? No.

What demand, lawful or not, has the CPP-NPA put on the government through the nine acts? The Court found that the purpose of these acts, having only a minimal impact on the larger population, were insufficient to coerce the government into any demand. Further, petitioner only established through witness testimony that the apparent purpose of these acts was to sow fear within these specific communities and discourage support for the military and government. “Sowing fear” is not a “demand.”

The petitioner put forward the argument that the unlawful demand motivating these incidents of atrocity were to heighten the pressures of the armed struggle and coax the government to resume peace negotiations. But rather than a lasting peace and compromise with the established authority of the state, the petitioner contends that the CPP-NPA truly desired to take advantage of the ceasefires that come with ongoing peace negotiations to leverage the release of any captured high-ranking officials of the organizations as well as to advance their protracted war with opportunistic recruitment, regrouping, and recharging.

The relevance of peace negotiations

The Court ruled correctly to say that demands for peace talks and the resumption of negotiations with the government are, on their face, valid and lawful. Firstly, the assertions of the petitioner are speculative and ultimately unsubstantiated or supported by the evidence presented. The alleged agenda of the CPP-NPA to demand a lawful negotiation does not make the demand for said negotiation any less lawful.

Secondly, would it not make sense that the parties to a conflict would make use of the period between active armed engagement to focus on internally strengthening their ranks and resources? Would it also not make sense for them to ask in these negotiations for shows of good faith from the authorities they naturally distrust to release their comrades in arms?

The proof also does not support this. There is no evidence submitted to establish that the commission of these nine atrocities against civilians were preceded or followed by any demand by the CPP-BPA for peace negotiations with the government.

If the petitioner’s contention is entertained and the ultimate goal of the CPP-NPA in participating in peace negotiations is to buy time to continue on in their protracted war against the government, this is a state of mind or hidden motive that the Court cannot assume to exist simply because peace negotiations have historically been unsuccessful. It is just as likely, given the lack of convincing evidence, that the failures of negotiations are purely due to the incompatibility of the government’s and the CPP-NPA’s directives, desires, and doctrine.

Thus, the Court ultimately ruled that the CPP-NPA is not a terrorist organization under the HSA for failure to meet the definitional elements to proscribe these organizations under the law.

The significance of the decision cannot be understated for the country, as it continues to grapple with armed conflicts in rural areas, specifically the Southern regions, and in light of the ATA which repealed the HSA. Though the court retained jurisdiction over this petition due to the saving clause of the repeal, any further petitions seeking to proscribe anti-government groups as terrorist will be assessed under the near law instead. – Rappler.com