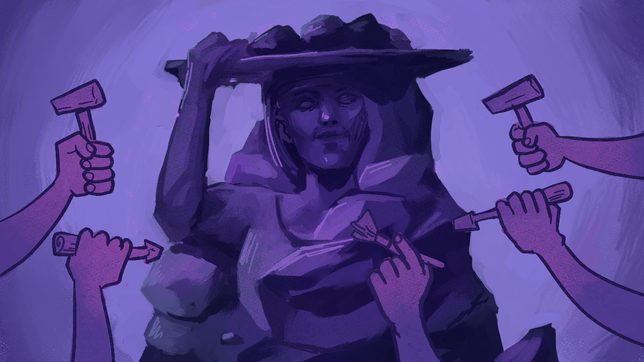 In the Philippines, like many countries, the dominant historical narratives tend to be “nationalist” ones. But, as Ben Anderson has argued, we need to problematize the notion of “nation” itself.

Who speaks (and who is spoken for) in the nation? Whose interests does it serve and represent? What does it encompass? Frederick Douglas persuasively engaged with the notion of America’s “independence” and what it meant for him as a Black slave. Did it include his voice, his story? The answer was a resounding no.

The Black Lives Matter movement contends that many monuments the world over represent white, male, “master” narratives. Similarly, in the Philippines, many of our monuments, like our nationalist narratives, address the concerns and history of colonial and social elites. For instance, the narrative depicted in San Agustin church is a purely Augustinian one, and does not involve other social voices. Is our understanding of “heritage” in the Philippines often Eurocentric and colonial? (I tackled questions of memory and memorialization in this earlier piece, Rethinking monuments)

In this moment of racial reckoning and decolonization, we are witnessing an urge to dethrone monuments, and not merely preserve them. Which monuments should we keep, and which should we retire to museums? Indeed, how do we rethink the relationship between monuments and public spaces? Which publics are being served by such erections?

These questions must be asked as we attempt to engage with the reality of the Philippine state and its bureaucracy. Many continue to be preoccupied with UNESCO World Heritage (WH) status as a way to bolster nationalist narratives over other forms of UNESCO recognition. Here, we need the communities to buy-in to the process of “canonizing” such sites, as Stephen Acabado has asserted. They are after all the key stakeholders.

But how is this to be realized without significant budgetary support? While my old office had a budget to look for new WH sites, there were few funds dedicated to help preserve existing WH sites. Conservation was generally viewed as being under the purview of specific “site managers,” many of whom lacked technical skills and financial capacities.

This economic reality meant that we had to try to partner with governors and mayors – many of whom had little interest in long-term heritage matters. Given the nature of the Local Government Code and the shifting terrain of political power that informs it, it’s a most politicized process. They were willing to help finance the writing of a WH dossier with their respective communities provided that they received the UNESCO inscription during (and never after) their respective political terms. Many wanted immediate symbolic credit. The technical inputs of scholars and communities were often ignored by some key players in national government. Sadly, during my time, very few scholars were consulted about heritage matters relating to UNESCO, and my agency was routinely bypassed altogether.

But the fact remains: the writing of a UNESCO dossier takes years of consultative work with communities. This is very difficult to do in a three-year time frame. The Philippines simply does not receive the kind of long-term state support for such endeavors the way many other UNESCO member states do. Overhauling this may require revisiting the Heritage Law itself and some of its problematic categories and assumptions.

In addition, many in the government during my time did not always appreciate the importance of heritage preservation. It was difficult to explain its value in “economic” terms to a number of agencies. Regrettably, this was the nature of much of the “discourse” I sadly encountered.

For example, the China-funded Binondo-Intramuros bridge, the construction of which threatened to impact the “buffer zone” around San Agustin Church, a UNESCO WH site (along with other “Baroque” churches). The Department of Public Works and Highways was able to prevail upon a number of cultural agencies to downplay such concerns. The Department of Foreign Affairs, under which UNACOM falls, had little interest in matters of “soft” power except in the context of showcasing performance. Repeated requests that the Department of Education incorporate Philippine WH sites in the syllabi of high school text books were dismissed. (Unlike building schools and classrooms, as well as consolidating K-12, curriculum development has unfortunately not been at the forefront of the agency’s agenda for several administrations.)

Why? Because the nature of government implies that complex issues like poverty and heritage, for example, end up falling under the domain of specific agencies. Each has its own bureaucracy, most of which remain deeply colonial and hierarchical.

What’s required of us

As with the academe, many fall under departmental silos. Key players in the education field hesitate to engage in culture because it happens to fall outside their “official” purview. Equally, a number of cultural agencies continue to have a limited engagement with education. The National Economic and Development Authority itself, at least to my knowledge, has yet to make Heritage Impact Assessments, unlike Environmental Impact Assessments, a requirement for new building projects, despite repeated efforts by the National Commission on Culture and the Arts to engage them. (READ: [OPINION] The slow death of Philippine history in high school)

Here I would argue that we need to address these issues in an inter-disciplinary manner, so that different agencies will be able to respect each other’s agendas and concerns. Regrettably, the playing field is not always level, and some agencies apparently have more say than others.

I suggest that what we now need are deeper conversations about what our monuments – and our notions of “heritage” — represent. These conversations should include multiple stakeholders, tackling deeper issues of historical and cultural representation.

Perhaps we need additional markers on elite monuments that broaden (and democratize) their social and historical contexts. Perhaps we might discuss the importance of creating monuments to other voices, depicting different communities (Chinese, Indians, indigenous peoples), classes, genders, sexual orientations and religions (like Islam).

Monuments (in malls?) depicting market vendors, fisherfolk, jeepney drivers, persons with disability, domestic and service workers, OFWs, among many others. In this day and age, is our nationalist narrative still primarily Catholic, cacique, or animist? (READ: [OPINION] How the Philippines can repair its culture)

Indeed, is monumental architecture even the best way to highlight the multiplicity of our cultures? What other architectural approaches and cultural markers can we use to represent the past in the present and for the future? – Rappler.com

Lila Ramos Shahani is the former Secretary-General of the UNESCO National Commission of the Philippines. She has served the government for 13 years under three presidential administrations.