Facebook Twitter Copy URL
Copied
'The only course of action is clear. To protect the Navy’s tenuous hold, either the BRP Sierra Madre is repaired or a new facility erected alongside it.'

Ayungin Shoal is a “regional flashpoint” just waiting to explode. It surged back to public attention following the recent “water-cannon incident” which involved a Chinese Coast Guard vessel against the Navy’s supply boats. The released video of the incident provided a gut-wrenching visual, which shows the latent disrespect the Chinese Communist Party (CCP) harbors against us Filipinos.

The diplomatic protest issued by DFA, along with a veiled threat about invoking the MDT, elicited an immediate statement of support from the US government. This was followed by Australia, Japan, France, and Germany. The US response might have been compelled by a fear of a repeat of the “Scarborough Shoal Stand-off.” That miscalculation contributed to the country’s loss of control over the feature in 2012, diminished America’s credibility in the region, and lost the confidence of Southeast Asia in US military power.

The more telling damage was the subsequent shift among ASEAN member-states towards a more pronounced hedging posture, with an eye to avoiding displeasing or facing China alone diplomatically. Since Trump’s presidency and carried forward to Biden’s administration, the US has a firmer support for the Philippine’s Arbitral award, prompting other middle powers in Asia and Europe to follow suit. This was a stark departure from Obama’s hands-off posture, and a pivot to Asia that never took off. China could’ve interpreted all these as America’s capitulation of its interest in Southeast Asia.

The Chinese Coast Guard’s actions were ironic, juxtaposed against Xi Jinping’s own statement during the ASEAN-China summit last November 16th – “China will not be a bully, but will always be ASEAN’s good neighbor, good friend, and good partner.” In that same meeting, President Rodrigo Duterte called out China, stating his abhorrence over the incident and that it does not speak well of the relations between the two countries. For that passing rebuke, their Foreign Ministry issued a diplomatic riposte demanding that the BRP Sierra Madre be removed from the shoal in honor of an alleged commitment made by the government.

It should be recognized that both countries have already staked out their respective positions, and backing down in the future may no longer be an option. Given the state of decay of BRP Sierra Madre and the harsh effects of Mother Nature, it could break apart anytime. Over the years, the ship’s life was prolonged by minor patchwork repair. The Navy is in a race against time and the elements, to sustain its foothold at the shoal. However, once it is rendered uninhabitable, the presence of the sailors assigned aboard the vessel will no longer be feasible.

For the CCP, the only acceptable long-term outcome is for the Philippines to give up the shoal by default. The Chinese are aware of the ship’s predicament, and has anticipated its eventual break-up. The “de facto naval blockade” they have thrown around the shoal is intended to prevent the Navy from bringing in construction materials. Their annoying tactic of closing in on the supply boats and taking videos and pictures was meant to document “compliance” to their demands. 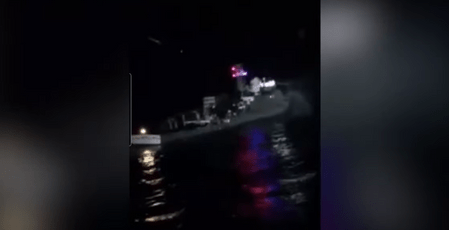 The country still controls the narrative over the “water-cannon incident,” but not much else. One should not take comfort in the country’s legal laurels alone, be it the Arbitral Award, sovereign rights entitled under UNCLOS, or the PH-US Mutual Defense Treaty. Hard power is at play at the Ayungin Shoal, and the “strategic timidity” by government – for want of a better word to describe its inaction – does not offer any diplomatic or military advantage. Right now, BRP Sierra Madre exists at the sufferance of the CCP, and who knows how much long the country can play the “victim card.”

From a naval standpoint, China has already established “localized sea control” over the adjacent waters around Mischief Reef and Ayungin Shoal over time. Aside from their coast guard vessels lurking around the shoal waiting for prey, its naval facility at Mischief Reef allows them to dominate the surrounding air- and sea-space and sustain their naval, coast guard, and militia forces. The Houbei-class missile boat, which was sighted a few months earlier and reported in the media, is well capable of “sea-denial operations.” Only the presence of BRP Sierra Madre prevents them from extending “sea control” over an expanded area.

The only course of action is clear. To protect the Navy’s tenuous hold, either the BRP Sierra Madre is repaired or a new facility erected alongside it. The Navy needs to bring in construction materials and combat engineers to perform major repair work, which requires weeks or even months to finish. A protective screen around the shoal is also essential, to prevent any hostile interference from Chinese forces coming from Mischief Reef.

As a supplementary action, the Navy should be allowed to push through with the acquisition of a land-based anti-ship missile system, which was intended to generate a strategic buffer along the entire west coast of the archipelago. If deployed in mainland Palawan, it will effectively change the dynamics in the Kalayaan Island Group area. Such a “sea denial capability” would offset the “battle force advantage” in the West Philippine Sea, which is currently being enjoyed by the PLA-Navy, not to mention its coast guard and militia.

Both actions require something lacking in current public governance, the political will to make hard foreign and national security policy decisions. Time is not on our side. This is complicated by the uncertainty that our Armed Forces faces next year; the possibility that a pro-China presidential candidate wins the national elections. Under such stark scenario, the image of BRP Sierra Madre falling apart may be the perfect meme for the state of the Filipino nation – broken and leaderless. – Rappler.com

Rear Admiral Rommel Jude Ong (Ret.) is currently Professor of Praxis at Ateneo School of Government. He was formerly the Vice Commander of the Philippine Navy.