Facebook Twitter Copy URL
Copied
'Duterte’s obscenities feel subversive, but subversion in this context is in the service of an autocratic end, where laughter produces an intimacy between ruler and ruled'

You can read Part 1 here.

Perhaps the most revealing instance of Duterte’s power of storytelling consists of his tale of being sexually abused at the age of 14 by an American Jesuit priest during confession. He often returns to this story as a way of casting aspersions at the Catholic Church that had been critical of his human rights abuses. Folded into this story, however, is another: his sexual abuse of their household help (which he later confesses was fabricated).

Here what we see is a double confession — Duterte to the priest and to the audience — and a double assault: the priest’s on Duterte and Duterte’s on the maid. The two acts of violation turn out to be intimately related whereby the priest’s assault of Duterte becomes a means for the latter’s domination of his audience. He has frequently told these stories on various occasions, usually in a mix of Taglish, Bisaya, and English. Below is my translation of a composite version:

“The priests would urge you to tell more sins. ‘Come on, come on give me your sins.’ Do you know why? Because the longer you stay there, the more he can fondle your balls. If you believed the story that I fingered a woman, you’re crazy. I only said it because the priest was insistent that we tell him more sins so we would stay kneeling while he squeezed our balls.” [laughter]

Many of Duterte’s stories are arguably confessional to the extent that they are about exposing what usually stays hidden, bringing to light what otherwise remains in darkness. As the mediator of divine forgiveness, the priest exercises an inordinate power over the penitent. However, in Duterte’s telling, the very act of confession is subverted. Duterte reveals the priest’s concupiscence, showing how confession becomes a vehicle not for forgiveness but for clerical abuse. 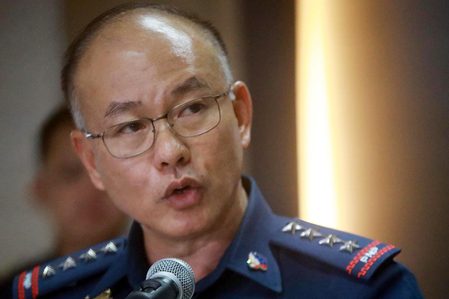 Confession breeds obscenity rather than divine dispensation, making for an uncanny encounter between priest and penitent. What emerges in the experience of confession for the penitent — here a young boy — is the return of the repressed in familiar form: the predator as father. From the perspective of the boy, the father’s demands appear autocratic. He cannot be refused. His lust for the boy requires that the latter must stay longer in the confessional, making up sins in order to satisfy the priest.

Confession here is converted into a kind of pornographic machine for the reproduction of sadistic male pleasures. Duterte submits to clerical abuse but turns that submission into a story about his mastery over the maid who remains innocent of her violation. His exposure and disempowerment by someone above become the conditions for overpowering someone below. He thus reverses his position from being abused to being the abuser, from a position of submission to one of domination, from one of fear to one of satisfaction and release. But only at the expense and through the exploitation of a subordinate other.

And what of his audience who applauds his stories and laughs at his jokes? As Freud points out, jokes are always about evading social repression. The political significance of jokes is that they go against the grain of the reasonable and the normal. They are thus valuable resources for the oppressed seeking to overthrow the weight of authority.

Posing as an insurgent, Duterte promises his listeners forbidden pleasures and says what they would’ve have wanted to say but could not. Their laughter could thus be read as a sign of their identification with Duterte’s efforts to find a way out of his suffering at the hands of the priest with a tale about abusing the maid who nonetheless remains unaware of her violation. They delight in his resistance and at his bumbling attempts at mastery that leads to some sort of self-recovery. Decades later when he tells this story, he is no longer a boy but the president of the country. Occupying the heights of power, he is capable of commanding attention wherever he goes with whatever he says.

Duterte’s obscenities feel subversive, but subversion in this context is in the service of an autocratic end, where laughter produces an intimacy between ruler and ruled. The vulgarity of his language positions him as a kind of rebel inviting others to join him in his assault on bourgeois sensibilities and norms. But it comes with the condition that the audience must submit to his narrative. Only he can tell the stories and expect their laughter. The reverse is never possible as no one, as far as I know, jokes with Duterte in public. He expects no narrative reciprocity, but only a kind of passive acceptance of the surplus of stories he gives you.

The pleasure that the audience gets from Duterte’s jokes is intrinsically linked to their willingness to participate in the imaginative violation of others, especially women. While laughter creates conviviality and community, it is always shadowed by violence and fear. Duterte recreates in every story something of the tone and texture of his primal scene: the dark confessional where he is held captive by the hands of the American priest.

Indeed, his performative shamelessness today may be read as the unfinished struggle to master his fear of the father-predator as he attempts to take on the latter’s power for himself. It is precisely that same phallic power that he seeks to grasp and wield when he addresses those he considers critical of him, such as women and “lesser” men, as well as abject figures of criminality like drug dealers and users. Recklessly cussing at them, he seeks satisfaction, brooking neither dissent nor opposition. “And?…And?…Then?…And?” – Rappler.com