[OPINION] First they came for the pushers and addicts. Now, the Leftists. 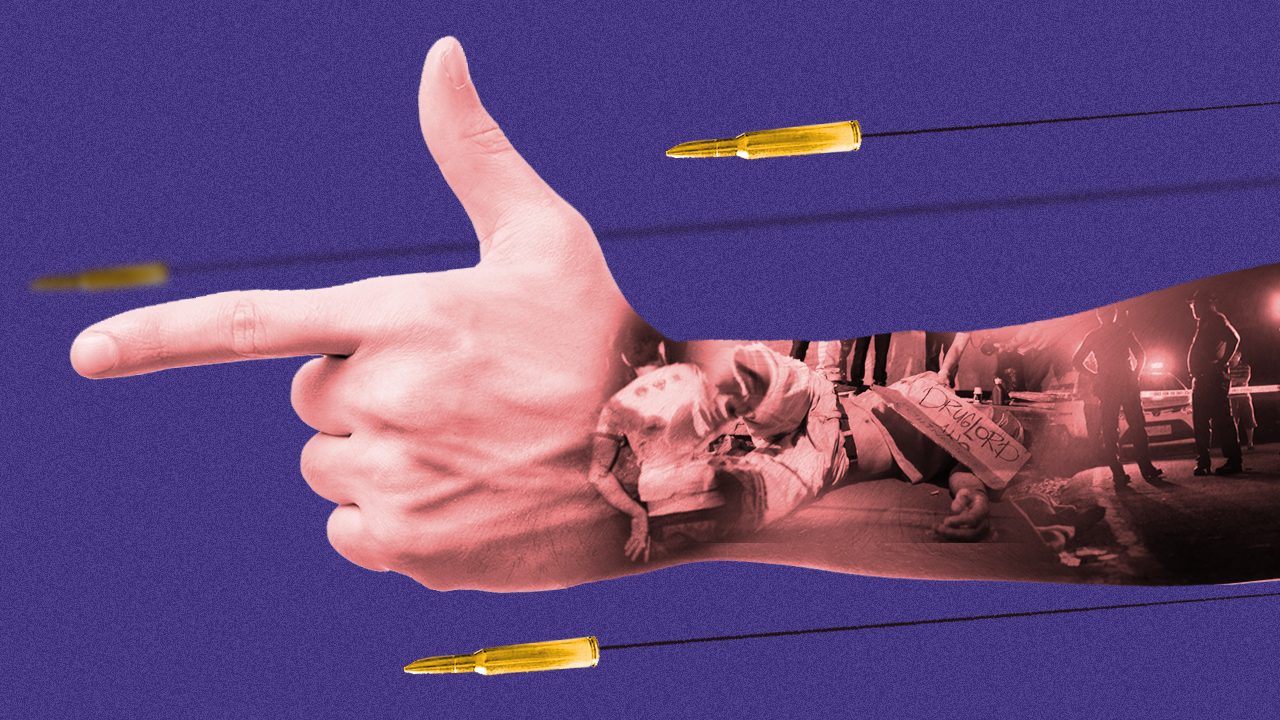 Facebook Twitter Copy URL
Copied
'Have I preferred to keep silent? Have I spoken out – and spoken out enough?'

First they came for the drug pushers and drug addicts. And now they’ve come for the Leftists.

The apparently extrajudicial slaughter of nine Leftist activists two weeks ago, coming soon after President Rodrigo Duterte ordered military and police forces to “kill” and “finish off” communist forces, brings to mind the remarkable and historic confession made by Lutheran pastor Martin Niemoller shortly after World War II. Indicting the cowardice of members of the German intelligentsia and clergy, including himself, in the face of Adolf Hitler’s and the Nazis’ brutal atrocities and genocide, Niemoller admitted: “We preferred to keep silent.” He expressed great remorse for his inaction.

Niemoller’s confession has been turned into poetic form by various groups commemorating the Holocaust of World War II. A variant of the poem, “First They Came,” begins as follows:

First they came for the communists
And I did not speak out
Because I was not a communist.

The subsequent parts of the poem proceed with “[t]hen they came for…,” enumerating the other victims of Hitler’s mass incarcerations, torture, and murder: socialists, the “incurable” sick, trade unionists, and Jews. The poem ends with:

Then they came for me
And there was no one left
To speak out for me.

Duterte has often been likened to other ultra-right, populist authoritarian leaders such as Donald Trump (US), Viktor Orban (Hungary), Narendra Modi (India), and Jair Bolsonaro (Brazil). All of them have engaged in some form of nationalist demagoguery, and they have used their skills in enthralling crowds and stirring up passions to gain power. While in power, they have resorted to repressive measures, tried to weaken or silence the opposition, and also particularly targeted scapegoats (migrants and refugees, Muslims, drug users, etc.) for verbal attacks or much more.

Adolf Hitler may be the ultimate model of a populist, demagogic dictator, and some of today’s populist autocrats and would-be autocrats may have taken a leaf or two from his book. But they all pale in comparison to Hitler, as none of them could ever come close to the scale of the abuses and atrocities – the war crimes, crimes against humanity, and genocide – that the totalitarian Nazi leader perpetrated.

Niemoller’s confession relating to the horrors and silences of the Nazi era, however, provides troubled minds as well as critical voices in the Philippines an opportunity to reflect on what has been happening to the country since Duterte came to power. What Niemoller wrote about has parallels, in varying degrees, in many countries where autocrats and would-be autocrats have systematically attacked, rounded up, or sought to eliminate, group by group, all those opposed to, or critical of, their rule, along with scapegoats blamed for the countries’ woes.

After reading Niemoller, many Filipinos who are troubled by Duterte’s attacks could ponder on the response – or the lack of response – to these onslaughts. Have I preferred to keep silent? Have I spoken out – and spoken out enough? (The main focus of Niemoller’s piece, an admission of guilt, was, after all: “And I did not speak out.”) The effect on conscience-stricken Filipinos could well be coming out of the silence or making oneself heard more.

One could reflect on Niemoller, however, from other angles, other perspectives too. Apart from contemplating on “And I did not speak out,” one could inquire into “First/Then they came for…” One could examine more closely the circumstances of the attacks, the enforcers (“they”), the targets (whom “they came for”), and the results or outcomes of these attacks. An examination of these would reveal that the moral delineations are not always simple and clear-cut, and it could give some insights into the reach as well as the limits of Duterte’s power.

An important point to bear in mind is that when Niemoller talked of “they” (the enforcers of Hitler’s onslaughts), he was referring to the entire state machinery of Germany. After being appointed Germany’s Chancellor in January 1931, Hitler very quickly attained and consolidated absolute power. Within two months, Hitler gained control over the executive and legislative branches of government, thanks to a law granting his cabinet the power to enact laws. By July, the Nazi Party was the only legal political party in Germany. The Reichstag turned into a rubber-stamp chamber. While continuing as head of government, Hitler assumed the Führership (head of state) in 1934, and became commander-in-chief of the armed forces. To ensure full control of the military, he forced the top generals to resign and he took personal command of it in 1938. Targets and enforcers: Drug dealers and users, DDS, and PNP

Populist authoritarian leaders often resort to scapegoating as a demagogic technique, blaming a particular segment of society for the country’s economic and social problems. Hitler used the Jews, for whom he had a particular hatred, as his prime scapegoats, and he targeted them for extermination. Calling the drug menace “a social monster,” Duterte has scapegoated drug dealers and drug addicts, and has vowed to “kill them all” in his “war on drugs.” Strangely enough, Duterte himself has linked the targets of his scapegoating and Hitler’s, saying “Hitler massacred three million Jews. Now there [are] three million drug addicts…. I’d be happy to slaughter them.” (Note: Six million Jews, not three million, were killed in the Holocaust.)

Duterte’s nationwide “war on drugs” had a prequel. Before he became president, Duterte, as mayor of Davao City, waged a deadly anti-narcotics campaign in the city that resulted in hundreds of extrajudicial killings. The main enforcer of this campaign was the Davao Death Squad (DDS), a vigilante group whose handlers were policemen, ex-policemen, and barangay leaders.

For the nationwide “war on drugs,” the Philippine National Police (PNP) became the key enforcer, relying mainly on off-duty cops or hired guns on the police payroll to take care of the extrajudicial killings. Duterte picked no less than Ronald “Bato” Dela Rosa, the former police chief of Davao City (now a senator), to head the PNP. Duterte has time and again enjoined the Armed Forces of the Philippines (AFP) to take part in the “war on drugs,” but the military’s role in it has remained minimal. This indicates a certain degree of resistance within the military establishment.

Taken from different angles, the results of the “war on drugs” can be said to be mixed. At least 27,000 drug suspects have already been killed, yet Duterte himself still sees drug dealers and drug users everywhere, and the drug war will just continue until the end of his term. As a populist stratagem, however, the “war on drugs” has been a great success. In a Pulse Asia survey conducted last September, Duterte scored very high in performance and trust ratings (91% of Filipinos), prompting political analyst Richard Heydarian to name him with some irony “the world’s most popular leader.” A recent study by political scientists Paul D. Kenny and Ronald Holmes found that “support for the campaign against illegal drugs in a broad sense is strongly correlated with populist attitudes in general and with the attribution of charismatic leadership traits to Duterte.”

While Duterte now enjoys soaring popularity ratings, thanks in large measure to his “war on drugs,” he could still be held accountable for the extrajudicial killings in this anti-narcotics campaign. He could face trial, conviction, and imprisonment for “crimes against humanity” at the International Criminal Court in The Hague, Netherlands. In a preliminary report released last December, the ICC declared that it had found “reasonable basis” to believe that crimes against humanity were committed under the Duterte government’s “war on drugs.” Duterte’s decision to withdraw the Philippines from the ICC in March 2018 does not protect him from ICC prosecution.

Then they came for the Islamist terrorists

As a group, the next major target of Duterte has been the Islamist terrorists, particularly those affiliated with the Islamic State of Iraq and Syria (ISIS) such as Abu Sayyaf and the Maute group. In May 2017, a botched military operation to capture the top ISIS/Abu Sayyaf leader in Mindanao triggered a five-month long battle in the city of Marawi, Lanao del Sur. Duterte immediately imposed martial law and suspended the writ of habeas corpus in the whole of Mindanao. Through the combined efforts of the AFP and PNP (the main enforcers of the counter-terrorist drive), the ISIS forces in Marawi were finally crushed. Over 1,000 people were killed in the Battle of Marawi, mostly Islamist militants. Marawi itself was devastated.

There was hardly any opposition to intensified operations against ISIS, but Duterte’s opponents and critics grew very much concerned that he could use the ISIS threat as an excuse for seizing absolute power. Duterte himself fanned such fears when he declared early on during the Marawi crisis that martial law could be extended across the Philippines. Meanwhile, human rights groups dreaded a spike in rights abuses in Mindanao.

The ISIS threat provided Duterte with the first major opportunity to take on full dictatorial powers. He was afforded much time to plan this out had he wanted to. With the strong backing of Congress, he extended martial law and the suspension of the writ of habeas corpus in Mindanao three times – up until the end of 2019. But unlike President Ferdinand Marcos nearly a half-century before him, Duterte did not make good on his threat of a nationwide martial law.

The outcome of the government’s all-out campaign against Islamist terrorists is far from definitive. Although government forces did vanquish ISIS in Marawi in 2017, other ISIS-affiliated groups continue to operate or have popped up in several provinces of Mindanao. Time and again since the 1990s, an Islamist terrorist group or faction has emerged as a major scourge to replace one that has fallen or declined.

One very positive development in Mindanao is that the Marawi crisis finally convinced the Duterte government to give the peace process with the Moro separatists top priority. Following Congress’s passage of the Bangsamoro Organic Law in 2018, a new Bangsamoro Autonomous Region in Muslim Mindanao (BARMM) has been established. The prospects for lasting peace and an end to the scourge of Islamist terrorism depend a lot on the success of the new autonomous region. – Rappler.com

Nathan Gilbert Quimpo is an adjunct professor (semi-retired) at the University of Tsukuba and Hosei University (Tokyo) in Japan. He is the author of “Contested Democracy and the Left in the Philippines after Marcos” and co-author of “Subversive Lives: A Family Memoir of the Marcos Years.”