A clitoris showed up on my Facebook feed, and though I am the proud owner of one, I was never happier to see it.

The post was about the tinggil, the Filipino word for clitoris. The tinggil was presented not as a dreary anatomical drawing, but illustrated as a happy fun-loving organ with feelings. Because that’s what the clitoris is: an organ with thousands of nerve endings that exists solely as a pleasure point.

Before I go any further, indulge me a bit and  wiggle your tongue around the word tinggil for a minute. Place an emphasis on the first syllable “ting” and let the last syllable roll out of your mouth in an exhale.

The pleasures of the tinggil are the focus of the new DKT-Trust Pinay campaign, “Yes, please” which puts female pleasure front and center.

As a condom and birth control pill manufacturer, DKT-Trust is in the business of marketing the pleasures of sex, but this campaign dares to depart from the usual formula of marketing sexuality in a number of ways.

The most obvious is the focus on a woman’s sexuality, highlighting the often overlooked fact that a woman can access pleasure by herself by knowing her body. A penis or a partner with a penis is optional.

Secondly, sex and pleasure are not framed as a couple – preferably heterosexual – activity.

For a pleasure activist and sex positivity advocate like myself, this is the stuff back-arching orgasms are made of. 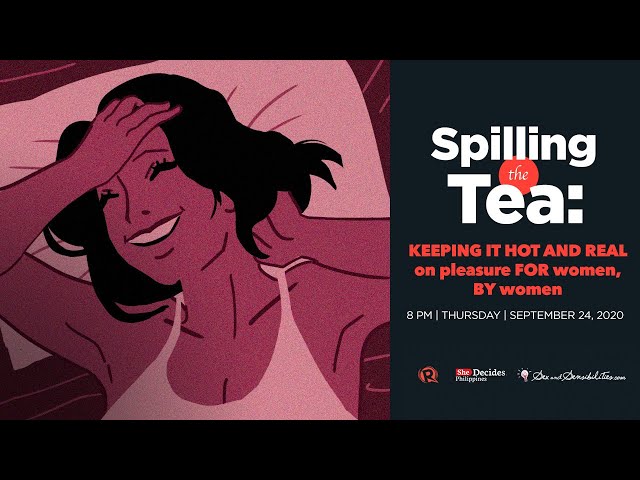 Breaking free from the binary of sexuality

I am ecstatic about the current discussions about positive sexuality in the Philippines, but the focus on pleasure as part of positive sexuality – rather than separate from it – is trending all over the world. Last month, the New York Times reported on the women bringing sex education to the Arab world through Instagram. Nour Emam got over the hurdle of figuring out how to pronounce “clitoris” in Arabic and established one of the leading platforms for sex education in the Arab world.

This is such a long way from the days when I wrote a sex column for a men’s magazine with editorial guidelines that prevented me from saying “sex” and “orgasm.” Imagine all the fun words that I couldn’t use. I think it was the only men’s magazine that squirmed at the mere mention of “blow job.”

But that tells you the only way sex could be talked about then: with restraint. And I’m not talking about handcuffs or leather here. This was the era when going to the public health clinic meant being visually assaulted by giant photos of close-up shots of gonorrhea and other sexually transmitted infections. To this day, just thinking about those images makes me involuntarily tighten my pelvic muscles and clamp my thighs together.

The Pleasure Project, a non-profit organization, has been advocating for a pleasure-centered focus to sexual health for years. This is premised on the simple reason that talking about sexuality and sexual health from the personal point of view of pleasure or what makes us feel good about our bodies results in better health outcomes. In short, messages that are premised on the extremes of sexuality – fear on one side and heterosexual family planning on the other – overlook the important insight that people have sex (partnered or not) because it feels good. It shames and excludes people from asking questions and getting information they need.

[Dash of SAS] Cliteracy: Of penises and patriarchy Recently, the Pleasure Project named me one of 12 Pleasure Fellows from all over the world, advocating for putting pleasure as a self-determined right smack in the middle of sexual health interventions.

I am part of a motley group of purpose-driven rebels on a mission to inundate Instagram, TikTok, books, and YouTube videos with sex-positive, diverse, and inclusive representations of pleasure that intersect with disability, queer gender identities, and geographical borders.

Included in this pleasure tribe is Leeza Mangaldas, one of India’s foremost sex positive voices on the internet. I spend hours on Leeza’s IG feed, which is brimming with candid information about sex that is both factual and fun. In the UK, Damian Weatherald founded his own sex toy business which specializes in accessible products made to enhance the sex lives of disabled people. In South America, Jaime Adorni, who chairs the non-profit  Sochisex or Sociedad Chilena de Sexualidades (@sochisex), launched a comic strip campaign to advocate safe sex practices for men who have sex with men. In Honduras, Laura Tomas, started the grassroots NGO  TabuTabu, which will work on a chatbot that will deliver sexuality education to adolescents through WhatsApp.

In addition, the Pleasure Project has designed 7 Pleasure Principles to inspire and support individuals and organizations on their mission to center sex-positive pleasure-based apporaches to sexual health. One of the principles is Love Yourself, or the importance of being kind to yourself and others to create a pleasure-inclusive world. I have to confess that this principle is my favorite. This nicely sums up how we need to divest ourselves of the shameful and negative notions of sex that we have been exposed to for so long. This wave of the pleasure revolution calls us to embrace our sexuality as part of our identity, not just parts of our body. Let’s enjoy riding this wave. – Rappler.com

Ana P. Santos is Rappler’s gender and sexuality columnist and a journalist reporting on sexuality, sexual health, and female migrant labor. She has a postgraduate degree in Gender (Sexuality) from the London School of Economics and Political Science. Follow her on Twitter: @iamAnaSantos and Facebook SexandSensibilities.com