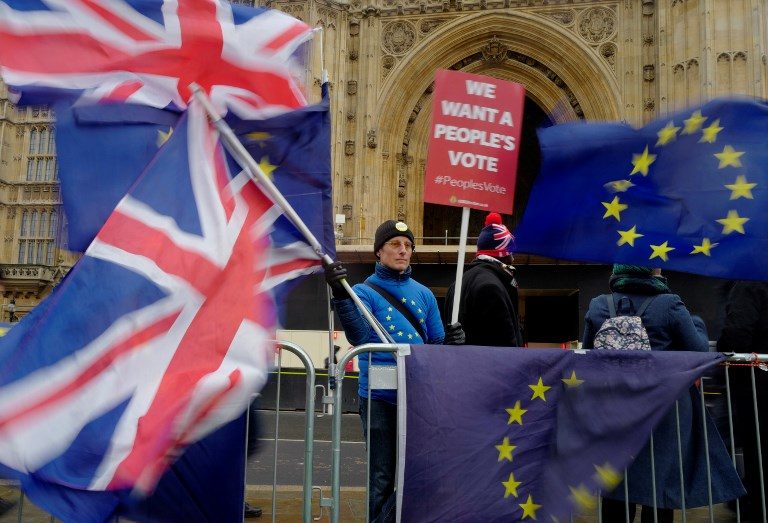 PARIS, France – The EU and European governments warned that the British parliament’s rejection of a Brexit deal heightens the risk of a disorderly withdrawal from the bloc.

Following are some of the key reactions to the huge defeat for British Prime Minister Theresa May Tuesday night, January 15.

l I urge the United Kingdom to clarify its intentions as soon as possible. Time is almost up.” – European Commission president Jean-Claude Juncker.

“The risk of a disorderly withdrawal of the United Kingdom has increased.”

l“If a deal is impossible, and no one wants no deal, then who will finally have the courage to say what the only positive solution is?” — EU Council president Donald Tusk.

l “It’s now up to the British government to say what the next stage is. The EU will remain united and determined to find a deal.” — EU chief Brexit negotiator Michel Barnier.

l “We still have time to negotiate but we’re now waiting on what the prime minister proposes.” — German Chancellor Angela Merkel.

“We want to limit the damage, and there certainly will be damage… That’s why of course we will continue to pursue an orderly solution. But we are also ready in case there is no such orderly solution.”

l Foreign Minister Heiko Maas said delaying Brexit beyond March 29 would make no sense. “It would only make sense if there is a path to the goal of a deal between the EU and Great Britain.”

l “We will have to negotiate a transition period with them because the British cannot afford to no longer have planes taking off or landing at home, and their supermarkets, as much as 70 percent, are supplied by continental Europe.” — President Emmanuel Macron.

“Second option, they tell us… ‘We’ll try to improve what we can get from the Europeans and then hold the vote again.

“In that case, we’ll look into it. Maybe we’ll make improvements on one or two things, but I don’t really think so because we’ve reached the maximum of what we could do with the deal.”

l France’s Europe Minister Nathalie Loiseau said the EU could push back the March 29 deadline if London made such a request. “Legally, technically, it’s possible.”

A presidential source said France is speeding up preparations for a “no deal” Brexit.

l “Regrettably, the outcome of tonight’s vote increases the risk of a disorderly Brexit. Consequently, the government will continue to intensify preparations for such an outcome.” – Government statement.

l “We will not say and are not saying anything on Brexit, even though someone constantly says and writes that Russia is rubbing its hands and gloating.” – Russian Foreign Minister Sergei Lavrov to reporters.

“Nothing of the kind. We always said – long before the idea of Brexit took shape – that a united, strong – and most importantly – independent European Union is in our interests.”

l “In any case, there will be no renegotiations on the withdrawal agreement.” – Austrian Chancellor Sebastian Kurz, in a tweet.

l “Preparations for all scenarios will continue and be intensified, including the inauspicious scenario of a withdrawal without a deal on March 29.” – Italian Prime Minister Giuseppe Conte.

l “An unordered exit would be negative for the EU and catastrophic for the UK.” – Spanish Prime Minister Pedro Sanchez. – Rappler.com