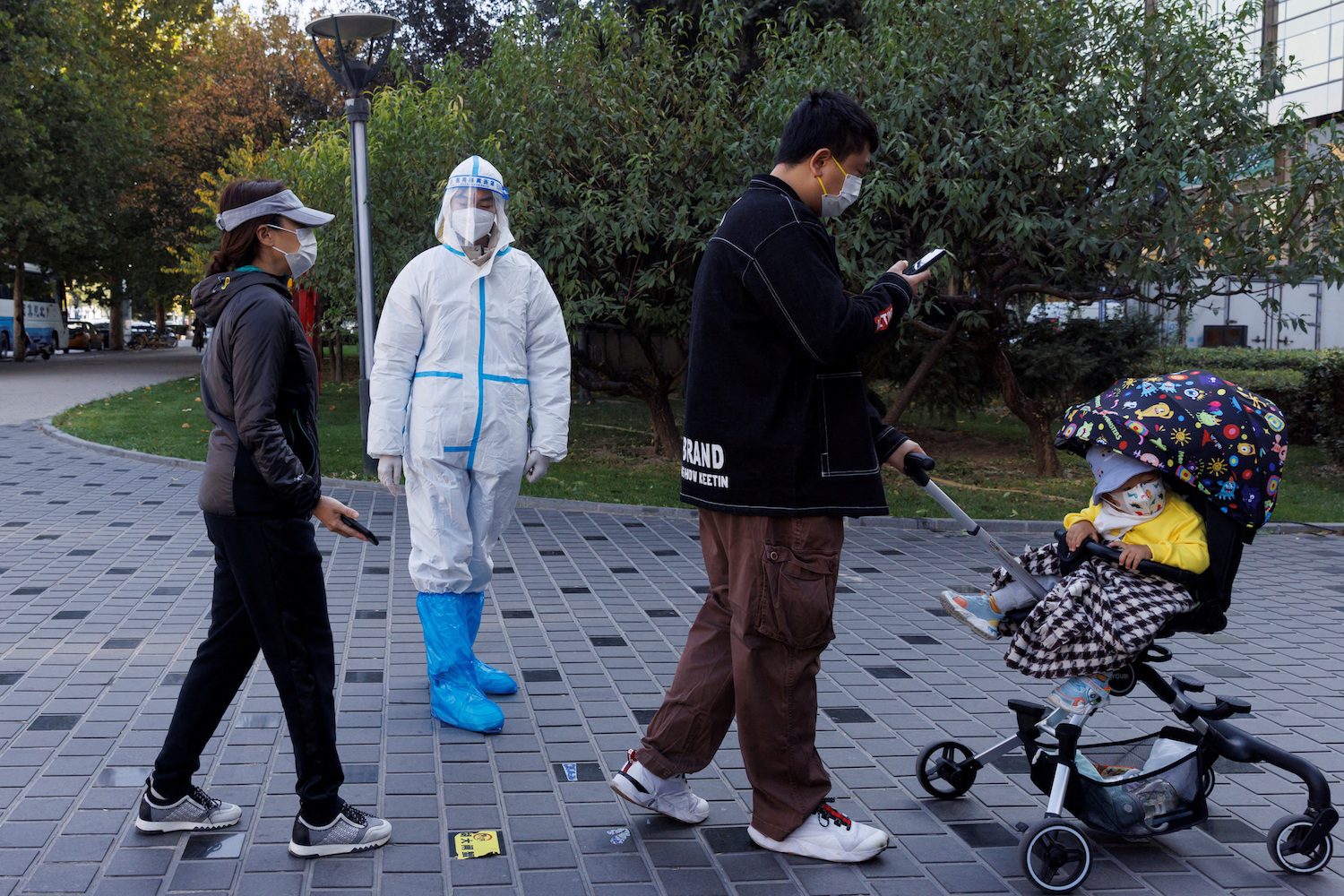 PANDEMIC MEASURES. A pandemic prevention worker wears a protective suit as people line up to get swab tests at a testing booth as outbreaks of coronavirus disease (COVID-19) continue in Beijing, China, November 3, 2022.

Facebook Twitter Copy URL
Copied
Authorities are determined to get on top of the outbreaks and make good on President Xi Jinping's zero-COVID policy, without having to impose mass lockdowns of the sort that shut Shanghai earlier in 2022

BEIJING, China – Millions of residents of China’s southern manufacturing hub of Guangzhou will be required to have COVID-19 tests on Wednesday, November 9, authorities said, in an effort to control the city’s worst outbreak with infections topping 2,000 for two consecutive days.

As local cases across China reached their highest level since April 30, authorities announced on social media that five districts representing more than half Guangzhou’s population of almost 19 million would need to undergo mass testing.

The latest round of mass testing in Guangzhou comes as China battles a rebound in infections in several economically vital cities, including the capital Beijing, which have dampened hopes that the world’s second-largest economy could ease curbs and restrictions soon.

Authorities are determined to get on top of the outbreaks and make good on President Xi Jinping’s zero-COVID policy, without having to impose mass lockdowns of the sort that shut Shanghai earlier this year.

The districts in Guangzhou subject to mass testing this week include Haizhu, which has seen the bulk of the city’s cases. A district-wide lockdown from Saturday to Monday has been extended to Friday as cases rise.

Guangzhou reported 2,637 new locally transmitted COVID cases for Nov. 8, up from 2,377 a day earlier amid the city’s most serious outbreak to date and accounting for nearly a third of the 8,176 new local infections reported in China on the day.

In the latest sign of how anti-virus measures are crushing consumer demand, China’s factory gate prices for October dropped for the first time since December 2020 and consumer inflation moderated, in part due to strict COVID curbs.

In central China, Apple supplier Foxconn said it would continue to maintain closed-loop operations – a system where staff live on-site isolated from the wider world – at its iPhone plant even as the economic zone that housed the factory lifted a seven-day lockdown.

Foxconn has declined to disclose the number of infections or comment on the conditions of those infected. The issues at the plant have hit iPhone production, prompting Apple on Monday to say that it expects lower shipments of premium iPhone 14 models.

While COVID cases in China are small by global standards, the policy response has been relentless and mass testing for large populations has been the norm since 2020.

Mass testing is generally free, but some local governments are resuming charges for tests as their finances come under strain amid a slowing economy.

A COVID testing company in Xuchang, a city in Henan province, said on Tuesday, November 8, they would stop all testing-related work from Friday due to late payments from authorities. – Rappler.com