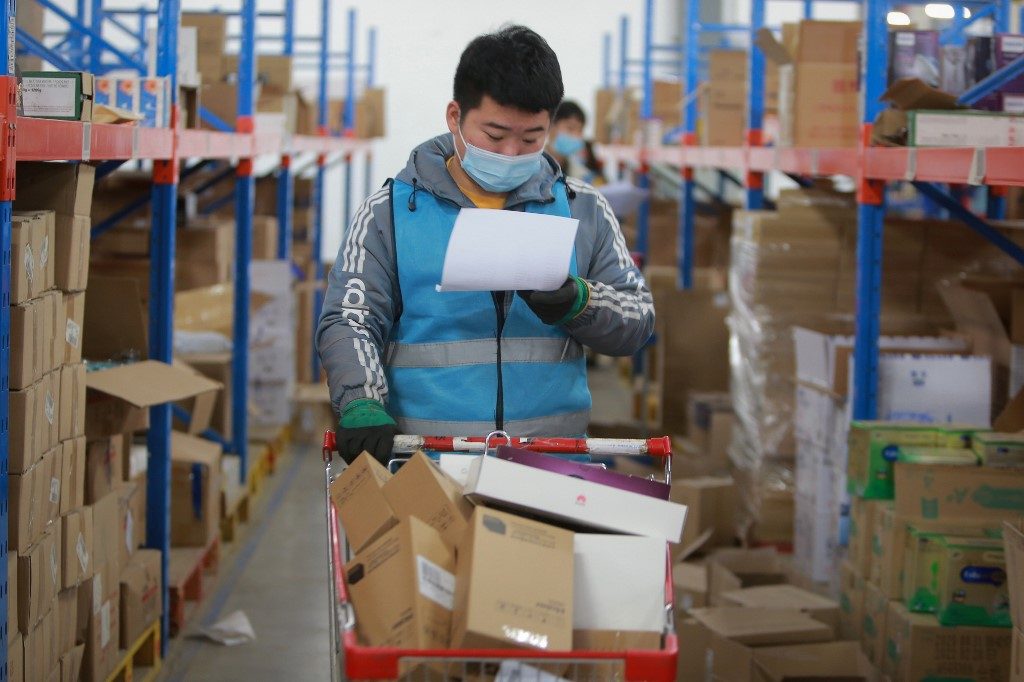 PACKAGE. An employee checks the information of packages on Singles' Day, also known as the Double 11 shopping festival, at the warehouse of Suning Logistics Network in Shenyang, in northeastern China's Liaoning province on November 11, 2020.

Facebook Twitter Copy URL
Copied
Once signed, the Regional Comprehensive Economic Partnership (RCEP) will be the world's largest trade pact in terms of GDP, according to analysts

Fifteen Asia-Pacific nations are set to sign an enormous free trade deal at an online summit that started Thursday, November 12, with the pact seen as a coup for China in extending its influence across the region.

Once signed, the Regional Comprehensive Economic Partnership (RCEP) will be the world’s largest trade pact in terms of GDP, according to analysts.

The pact, which was first proposed in 2012 and viewed as a Chinese-led rival to a now-defunct US trade initiative, loops in 10 Southeast Asian economies along with China, Japan, South Korea, New Zealand, and Australia.

“After 8 years of negotiating with blood, sweat, and tears, we have finally come to the moment where we will seal the RCEP Agreement this Sunday,” said Malaysia’s trade minister Mohamed Azmin Ali, ahead of the virtual meeting.

Vietnam’s Prime Minister Nguyen Xuan Phuc also confirmed the pact would be signed this week during opening remarks at the online summit.

India had been due to sign the pact but pulled out last year over concerns about cheap Chinese goods entering the country, though it can join at a later date if it reverses its position.

The RCEP – whose members account for around 30% of global GDP – would be a “major positive step forward for trade and investment liberalization” in the region, said Rajiv Biswas, Asia Pacific chief economist at global business consultancy IHS Markit.

“RCEP will be the world’s biggest free trade area measured in terms of GDP,” he told AFP.

The pact’s expected signing comes as the 10 members of the Association of Southeast Asian Nations (ASEAN) fight to mitigate the crippling cost of the coronavirus, which has ravaged their economies and left many battling a severe public health crisis. The pact is also seen as a mechanism for China to draft the rules of Asia-Pacific trade, following years of US retreat under President Donald Trump.

But US President-elect Joe Biden may engage more actively with the region, Capri added, in much the same way as former President Barack Obama did.

“Think of the Biden administration as sort of a continuation of the Obama administration, certainly when it comes to the pivot to Asia,” he said.

While the region waits to see how its relationship with the US will unfold, it is battling several other thorny issues – including disputes over the South China Sea.

The flashpoint waters – claimed in their entirety by Beijing but also contested by Vietnam, the Philippines, Malaysia, Brunei, and Taiwan – will also be on the agenda at the summit.

But as several nations battle serious COVID-19 outbreaks, and with many promised priority access to Chinese-made vaccines, a stand against Beijing is seen as unlikely.

Instead, the focus will be on economic development in the bloc, with many of its tourism and export-reliant countries suffering badly.

“The road ahead is not a bed of roses,” said Vietnamese President Nguyen Phu Trong at the summit, warning that leaders would be expected to work together to control infections and support people who are suffering.

The RCEP could help ease the financial pain, said Kaewkamol Pitakdumrongkit, an assistant professor at the Center of Multilateralism Studies in Singapore’s S. Rajaratnam School of International Studies.

“In the light of COVID-19, RCEP could enable ASEAN to bounce back more quickly as such a deal allows firms to diversify their supply chains and increase resiliency of the regional economies,” she added. – Rappler.com