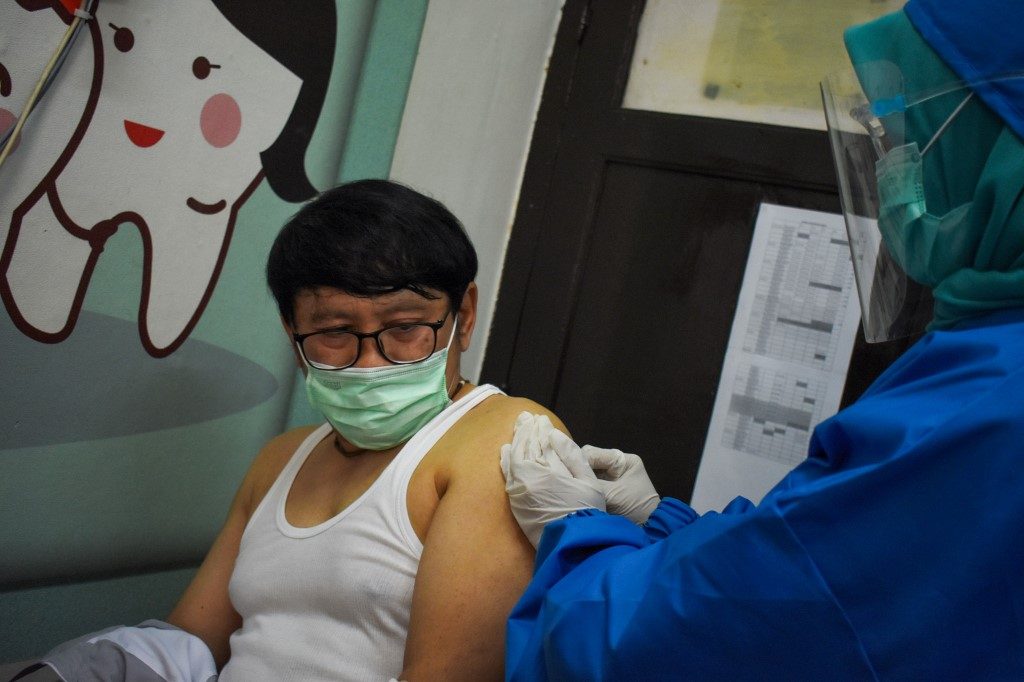 This file photo taken on August 14, 2020 shows a man taking part in a clinical trial for a vaccine for the COVID-19 coronavirus at a health centre in Ciumbuleuit, in Bandung.

Indonesia is betting that China-made coronavirus vaccines can help it tackle one of the worst outbreaks in Asia, but analysts warn it is a wager that could leave them holding a high-interest diplomatic IOU.

Beijing has promised poorer nations priority access to its inoculations, in an attempt to repair an image tarnished by the pandemic, which started in the central Chinese city of Wuhan.

This week, Indonesia received 1.2 million doses of a COVID-19 vaccine made by China’s Sinovac, with another 1.8 million set to arrive next month, but experts say this access could have strings attached.

“China’s ‘vaccine diplomacy’ is not unconditional,” Ardhitya Eduard Yeremia and Klaus Heinrich Raditio said in a paper published this month by the Singapore-based Yusof Ishak Institute.

“Beijing may use its vaccine donations to advance its regional agenda, particularly on sensitive issues such as its claims in the South China Sea.”

Beijing may use its vaccine donations to advance its regional agenda, particularly on sensitive issues such as its claims in the South China Sea.

Says a paper published by the Singapore-based Yusof Ishak Institute.

Indonesia started human trials of the Sinovac vaccine this summer, and it has not yet been approved by Chinese or Indonesian regulators.

“The vaccine cooperation with China is the most high profile,” said Evan Laksmana, a senior researcher at the Jakarta-based Centre for Strategic and International Studies.

“That creates potential implications down the line (and) to what extent Indonesia would be highly dependant on the Chinese medical supply chain over the long run.”

Indonesia, the world’s fourth-most populous nation with 270 million people, has reported more than half a million coronavirus infections and around 18,000 deaths. Low rates of testing means these official figures are widely thought to be well below the reality. China is Indonesia’s top trading partner and the Southeast Asian nation is home to numerous projects, including a high-speed train line, that are part of Beijing’s globe-spanning Belt and Road infrastructure building blitz.

However, the relationship has its problems.

In January, Indonesia deployed fighter jets and warships to patrol the Natuna islands after Chinese coast guard and fishing vessels entered the area on the edge of the South China Sea.

Jakarta has since toned down its response, turning to diplomatic protests instead.

The United States views Jakarta as a key strategic partner as it pushes back against China’s growing influence and controversial military build-up in the South China Sea.

“At the moment, Indonesia is playing a rather clever balancing game in order to avoid identification with just one of the two great powers,” said Marcus Mietzner, an associate professor at Australian National University.

“(Indonesia) has already made it known that it would not accept a potential Chinese request to build a military base in Indonesia. While it is not clear whether China actually made such a request, its rejection was noted with great satisfaction in Western capitals.”

But with the US epidemic surging, Washington is focused on fighting the coronavirus at home and may not be able to knock Beijing off its vaccine diplomacy blitz.

And despite some disputes, the relationship with China remains crucial for Jakarta, and it may find itself indebted diplomatically to Beijing because of the vaccines.

“So far, there is yet to be any serious quid pro quo with regards to the vaccine,” said researcher Laksmana.

“But everyone in Jakarta is aware… it would be harder for us to make a series of moves in foreign policy or something else that might (damage) the relationship with China.” – Rappker.com