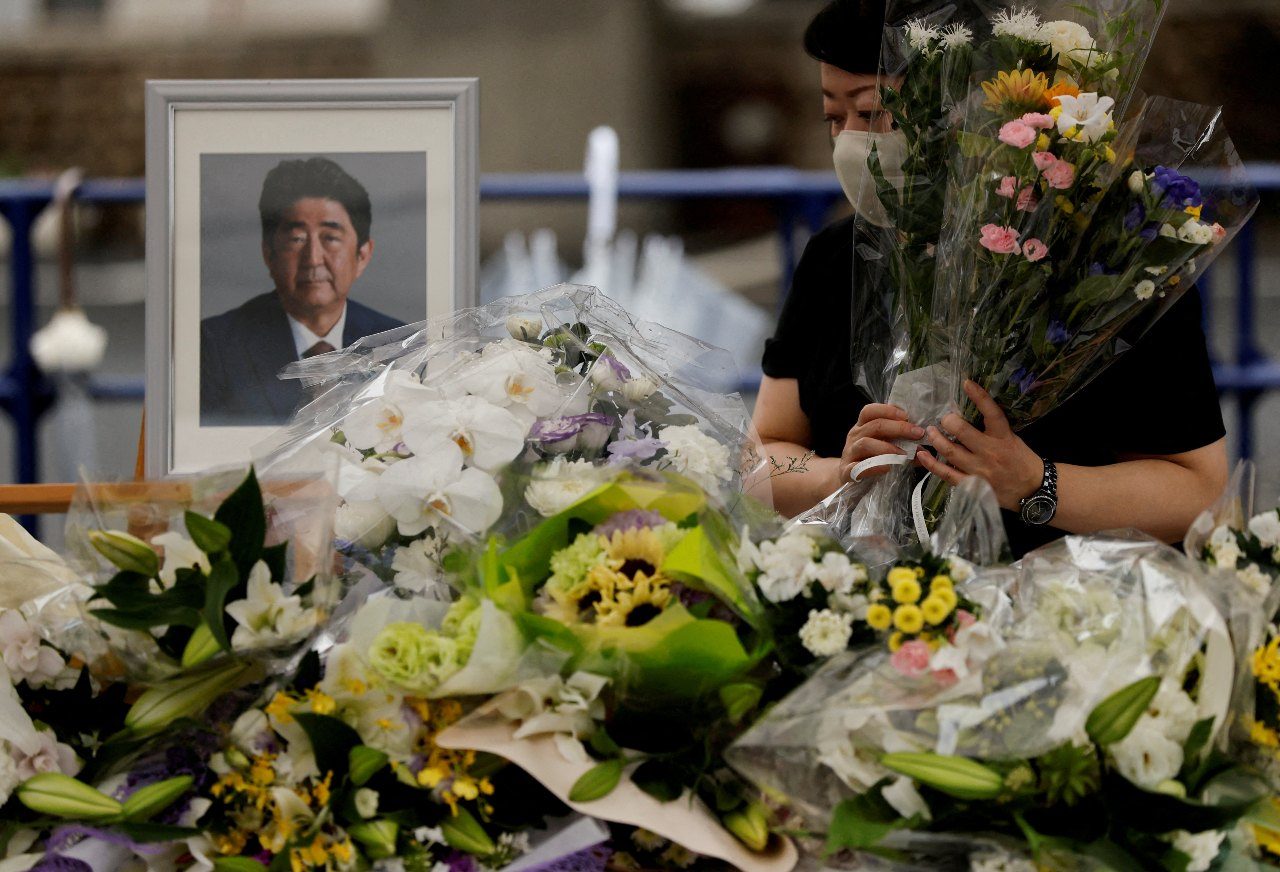 FLOWERS FOR SHINZO ABE. A mourner offers flowers next to a picture of late former Japanese Prime Minister Shinzo Abe, who was shot while campaigning for a parliamentary election, on the day to mark a week after his assassination at the Liberal Democratic Party headquarters, in Tokyo, Japan July 15, 2022.

Facebook Twitter Copy URL
Copied
Prime Minister Fumio Kishida's decision has aroused widespread public opposition, largely because of revelations that ties between the ruling party and a church group could have played a part in Shinzo Abe's assassination

TOKYO, Japan – Japan’s prime minister said on Thursday, September 8, he accepted criticism that he had not sufficiently explained why he wants a state funeral for slain former premier Shinzo Abe but defended the decision that has helped drag his support to its lowest ever.

Prime Minister Fumio Kishida’s decision to hold the funeral on September 27, to be paid for by the state, has aroused widespread public opposition, largely because of revelations that ties between the ruling party and a church group could have played a part in the assassination.

“I humbly accept the criticism that my explanation was insufficient,” Kishida told members of parliament in response to questions about the issue.

Abe, Japan’s longest-serving but divisive premier, was shot and killed at an election rally on July 8.

His suspected assassin, arrested at the scene moments after the killing, bore a grudge against the Unification Church, alleging it bankrupted his mother, and blamed Abe for promoting it.

A majority of members of the public feel links between the ruling Liberal Democratic Party (LDP) and the church, which was founded in South Korea in the 1950s and is famous for its mass weddings, have not been adequately explained.

Many voters are also skeptical that the political party will cut ties with the church, as Kishida has promised. The LDP is set to announce the results of its investigation into members’ links later on Thursday.

Using information available on legislators’ websites and sources including videos posted by the church, Reuters has identified at least 65 LDP lawmakers – including Abe and 23 members of his right-wing faction – who attended church events, sent it messages of congratulation, paid membership fees, accepted political donations from its affiliates, or received election help.

Kishida has said he decided to hold a state funeral given Abe’s contributions to the country and his achievements, which have been recognised at home and abroad.

But criticism of the funeral could increase as the cost has risen to $12 million, and is likely to rise even more because of expenses such as security for foreign dignities, who are expected to include US Vice President Kamala Harris and Indian Prime Minister Narendra Modi.

“Even in comparison to similar ceremonies that were held in the past, we believe the estimate is reasonable,” Kishida said in response to a question on whether costs were too high.

A poll this week showed disapproval of Kishida’s government increased to more than 40% of those questioned for the first time since he took office last year. Other surveys have shown disapproval edging above approval.

Though Kishida does not have to hold a national election for three years, growing disapproval could make it hard to push through an agenda that includes bringing more nuclear reactors back online.

Political analysts say it may be hard for Kishida to regain much ground with the public in the short term given that the funeral is several weeks away.

“This issue will drag on,” said Airo Hino, a political science professor at Waseda University, noting that Kishida may have waited too long to explain his decision.

“As the day for the funeral approaches and disapproval continues to grow, his support is likely to fall still further.” – Rappler.com