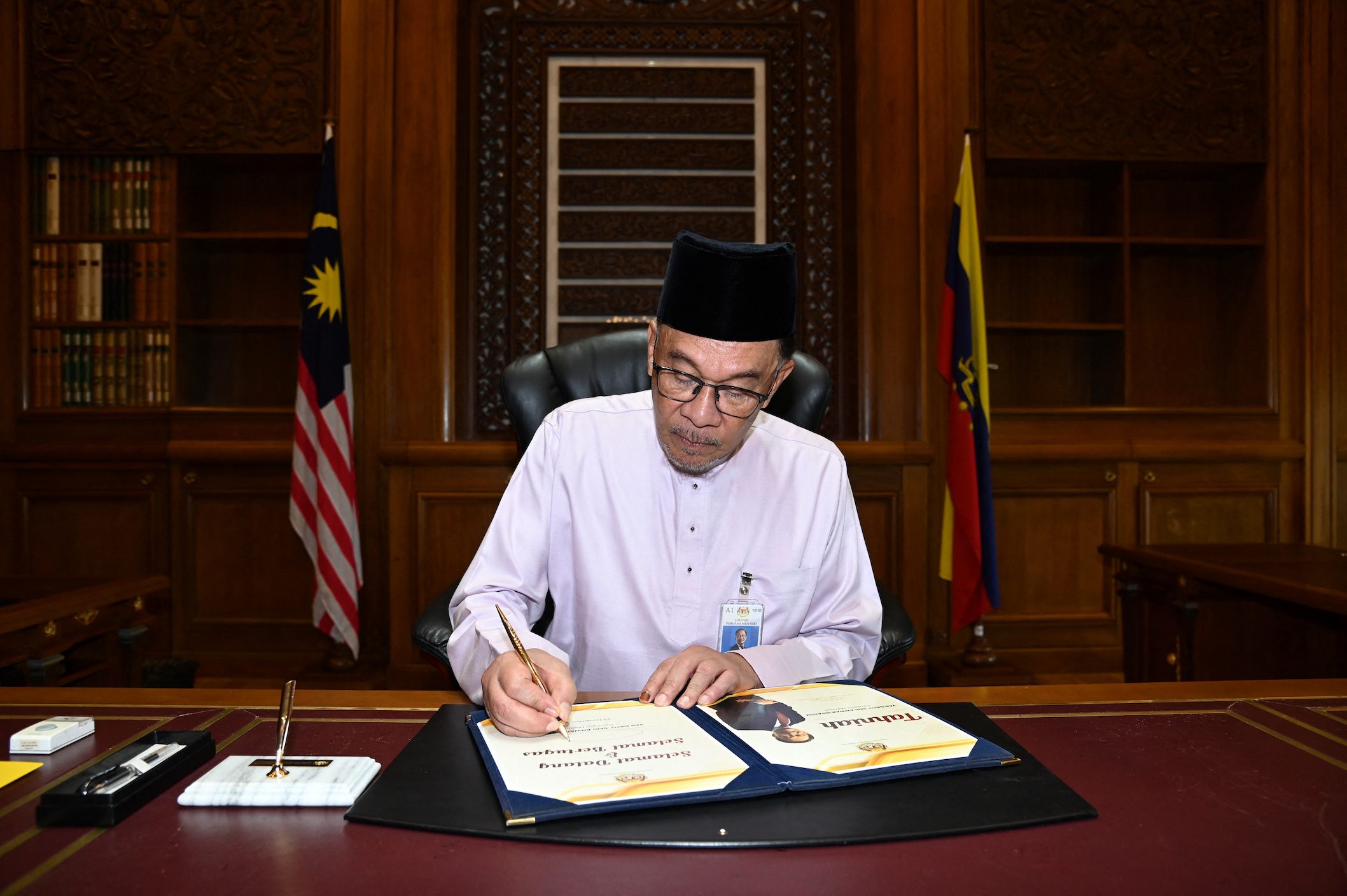 FILE PHOTO. Malaysia's newly appointed Prime Minister Anwar Ibrahim signing a document as he clocks in to the Prime Minister office on his first day holding the premier position at Putrajaya, Malaysia November 25, 2022.

Facebook Twitter Copy URL
Copied
Corruption is a major issue in Malaysia, with former prime minister Najib Razak jailed this year after being found guilty in a case linked to a multibillion-dollar scandal at state fund 1MDB

KUALA LUMPUR, Malaysia- Malaysia’s Anti-Corruption Commission said on Thursday, December 8, it has opened an investigation into an alleged misappropriation of 600 billion ringgit ($136.39 billion) in government funds.

The investigation comes after new Prime Minister Anwar Ibrahim announced a review of government projects worth billions of dollars approved by his predecessor Muhyiddin Yassin, alleging they did not follow proper procedures.

Muhyiddin, who was prime minister for 17 months between 2020 and 2021, has denied wrongdoing and said he would welcome an investigation.

The anti-graft agency did not provide details on the latest probe or its targets, but called on the public to come forward with evidence or information.

Anwar was appointed premier last month, forming a government with rival blocs after a tightly contested election race with Muhyiddin resulted in a hung parliament.

Anwar this week ordered a review into Muhyiddin-era projects, including a plan for a state-owned 5G network and flood mitigation projects worth 7 billion ringgit ($1.59 billion).

Corruption is a major issue in Malaysia, with former prime minister Najib Razak jailed this year after being found guilty in a case linked to a multibillion-dollar scandal at state fund 1MDB.

Anwar’s deputy Ahmad Zahid Hamidi – whose coalition is a key partner in the new administration – is also facing dozens of corruption and money laundering charges. Ahmad Zahid has pleaded not guilty.

Tengku Zafrul Aziz, a former finance minister in Muhyiddin’s administration who oversaw government spending, said on Twitter he would cooperate fully with investigators if asked.

“There’s nothing to hide,” he said in a Twitter post. Tengku Zafrul last week was appointed to Anwar’s cabinet as international trade minister. –Rappler.com