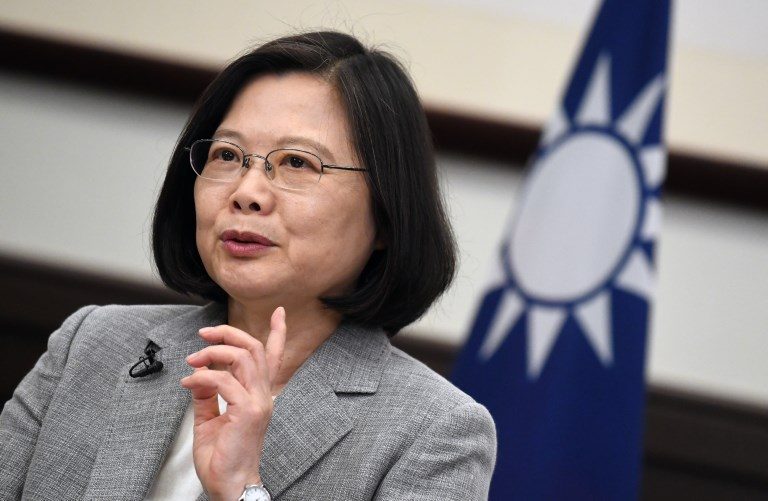 Taiwan's President Tsai Ing-wen takes part in an interview with AFP at the Presidential Office in Taipei on June 25, 2018. Tsai on June 25 called on the international community to "constrain" China by standing up for freedoms, casting her island's giant neighbour as a global threat to democracy. / AFP PHOTO / SAM YEH

Facebook Twitter Copy URL
Copied
'As long as there is a need, based on the position of humanitarian care, we are willing to provide the necessary assistance,' says Taiwan President Tsai Ing-wen

TAIPEI – Taiwan President Tsai Ing-wen on Sunday, January 1, offered to provide China with “necessary assistance” to help it deal with a surge in COVID-19 cases, but said Chinese military activities near the island were not beneficial to peace and stability.

In an abrupt change of policy, China last month began dismantling the world’s strictest pandemic regime of lockdowns and extensive testing, meaning COVID-19 is spreading largely unchecked and likely infecting millions of people a day, according to some international health experts.

Tsai, in her traditional new year message, delivered at the presidential office, said everyone had seen the rise in cases in China, which views Taiwan as its own territory and has ramped up military pressure to assert those claims.

“As long as there is a need, based on the position of humanitarian care, we are willing to provide the necessary assistance to help more people get out of the pandemic and have a healthy and safe new year,” she said, without elaborating.

Taiwan and China have repeatedly sparred over their respective measures to control the spread of COVID.

China had criticised Taiwan for ineffective management of the pandemic after soaring domestic infections last year, while Taiwan has accused China of a lack of transparency and trying to interfere with vaccine supplies to Taiwan, which Beijing has denied.

Tsai reiterated a call for dialogue with China, saying war was not an option to resolve problems.

Chinese President Xi Jinping, in his New Year address on Saturday evening, made only brief reference of Taiwan, saying people on either side of the Taiwan Strait “are members of one and the same family”, and made no mention of seeking to bring the island under Chinese control.

“But I want to remind people – the military activities of the People’s Liberation Army near Taiwan are not at all conducive to cross-strait relations nor regional peace and stability,” she added.

Shortly after Tsai spoke, Taiwan’s Defence Ministry said 12 Chinese military aircraft had crossed the median line of the Taiwan Strait, which had previously served as an unofficial buffer between the two sides, in the past 24 hours.

China staged war games near the island in August after then-U.S. House Speaker Nancy Pelosi visited Taipei, and those military activities have continued.

Tsai has repeatedly said she wants talks and peace with China but that Taiwan will defend itself if attacked and that only its 23 million people can decide their future. China views Tsai as a separatist and has refused to talk to her. – Rappler.com