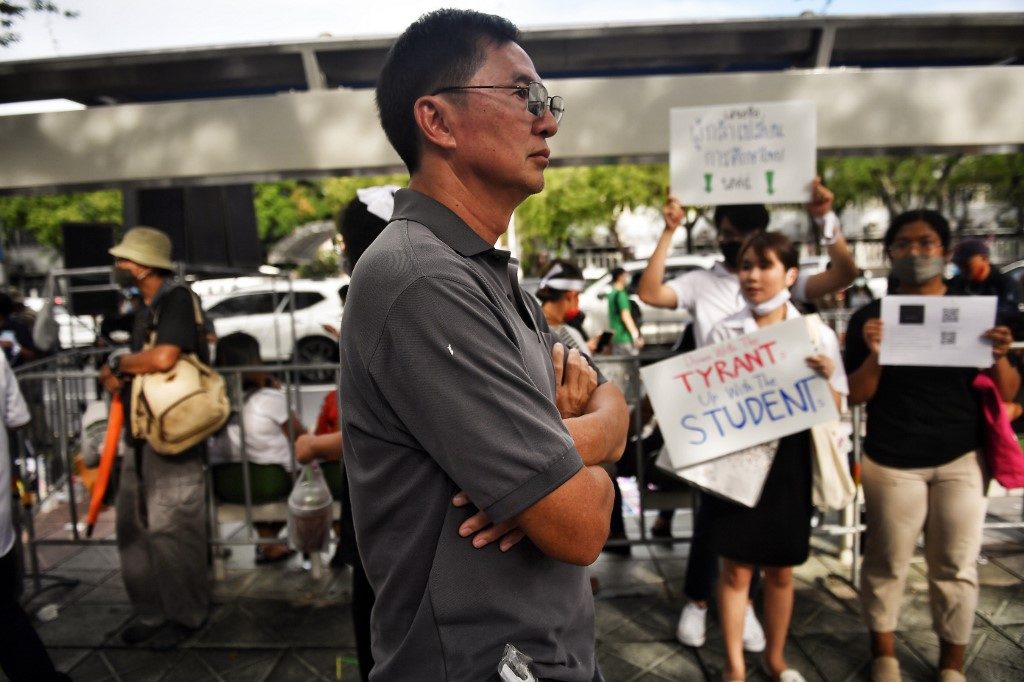 PROTEST. This photo taken on September 5, 2020, shows activist Somyot Prueksakasemsuk, who was jailed on lese majeste charges, attending a student rally in Bangkok.

Thai democracy activists rallied at the UN’s Bangkok office Thursday, December 10, and asked the body to pressure the kingdom into repealing royal defamation laws they say are being used to suppress their movement.

Twenty-three leaders are facing charges under the legislation for headlining demonstrations demanding reforms to the monarchy and more scrutiny of the royal family’s financial arrangements.

The kingdom’s lese majeste laws shield the super wealthy King Maha Vajiralongkorn and the royal family from criticism, with anyone convicted facing between 3 to 15 years in prison.

Among the several dozen activists at the UN office was Somyot Prueksakasemsuk, 59, who previously spent 7 years in jail on a lese majeste conviction for publishing satire of a fictitious royal family.

“This is not good for the image of the monarchy in Thailand,” he told reporters, adding that those with royal defamation convictions are treated “like animals” in prison.

Lese majeste crimes have been on the books for over a century in Thailand, but were last strengthened in 1976.

The use of the law has slowed since 2018 due to the “mercy” of the king, according to Prime Minister Prayut Chan-O-Cha, but last month the premier gave the green light to deploy it again after months of protests.

Protest leader Parit “Penguin” Chiwarak, who has been charged under the law said he feared its use would create a greater political rift between the mostly young democracy activists and conservative backers of the monarchy.

“In a democratic system, there is no need for…legal attacks. We can have different opinions and live together.

Hundreds of protesters also rallied Thursday at a Bangkok memorial that commemorates the lives of pro-democracy supporters lost during a military massacre in 1973.

“When the king or the royal family spend the money – it’s actually our taxes. We can not (criticize) how they use our money.”

Overnight police also installed shipping containers stacked on top of each other and razor wire blockades to stop protesters from marching towards Government House, a royal palace and other sensitive sites.

Besides calling for reforms to the monarchy, protesters are demanding a rewrite of a military-scripted constitution and the resignation of Prime Minister Prayut Chan-O-Cha – who came to power in a 2014 coup. – Rappler.com