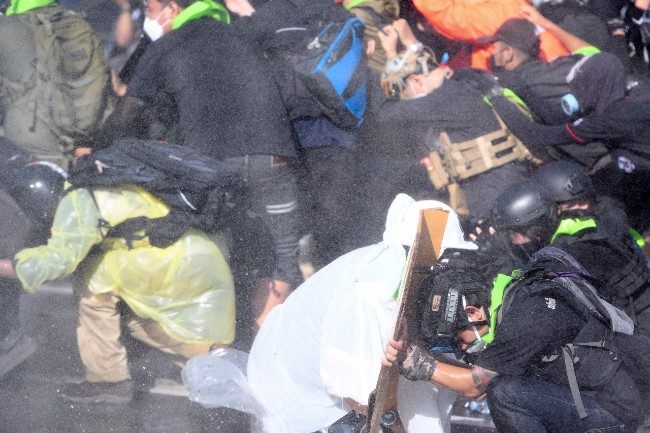 PROTEST. Anti-government protesters take cover as riot police spray them with a water cannon during a march in Bangkok, Thailand on July 18, 2021.

Thai police used tear gas, water cannon and rubber bullets on Sunday, July 18, as they tried to stop protesters from marching on the office of Prime Minister Prayuth Chan-ocha calling for him to resign.

More than 1,000 protesters took part in the demonstration, which police had so far not dispersed.

Many demonstrators carried mock body-bags to represent coronavirus deaths, as they blame the prime minister and his government for mismanaging the COVID-19 pandemic.

“The government has been poor at managing the situation and if we don’t do anything there will be no change,” one protester, Kanyaporn Veeratat, 34, told Reuters.

The use of force by the police came after some protesters tried to dismantle barbed wire and metal barricades set up by the authorities to block roads from Democracy Monument to Government House where the prime minister works.

“Murderous government!,” Panusaya “Rung” Sithijirawattanakul, a protest leader, tweeted after the use of force.

The protest marked one year since the first of a wave of large-scale street protests led by youth groups that attracted hundreds of thousands of people across the country.

The momentum of those protests stalled after authorities began cracking down on rallies and detaining protest leaders, and after new waves of COVID-19 infections broke out.

Most of the protest leaders who were detained have been released on bail and some took part in anti-government protests last month.

As part of curbs to stem the coronavirus spread, the government on Friday, July 16, imposed a new nationwide ban on public gatherings of more than five people, which carries a maximum penalty of a two-year jail term or a fine of up to 40,000 baht ($1,220), or both.

Thailand reported 11,397 infections and 101 deaths on Sunday, bringing the cumulative total to 403,386 cases and 3,341 fatalities, the vast majority from an outbreak since early April that is being fuelled by the highly transmissible Alpha and Delta COVID-19 variants.

Police urged people not to join Sunday’s protest, saying that to do so risked further spreading coronavirus, and warned that those who breached the law and cause unrest will face charges.

“There has been increasing in the number of newly infected cases on a daily basis,” said deputy police spokesman Kissana Phathanacharoen.

“Joining such a rally would raise public concerns, public health concern and worsen the current situation,” he added.

Street protests against the prime minister have been held in recent weeks by several groups, including Prayuth’s former political allies, as frustrations grow over the mounting infections and the damage the pandemic has done to the economy.

Last year’s protests also broke traditional taboos by openly criticizing the king, an offence under the country’s strict lese majeste law that makes insulting or defaming the king, queen, heir and regent punishable by up to 15 years in prison. – Rappler.com