BREATHE. A pro-democracy protester wearing goggles breathes into a plastic bag as tear gas and chemical-laced water cannons are used during an anti-government rally in Bangkok on November 17, 2020. 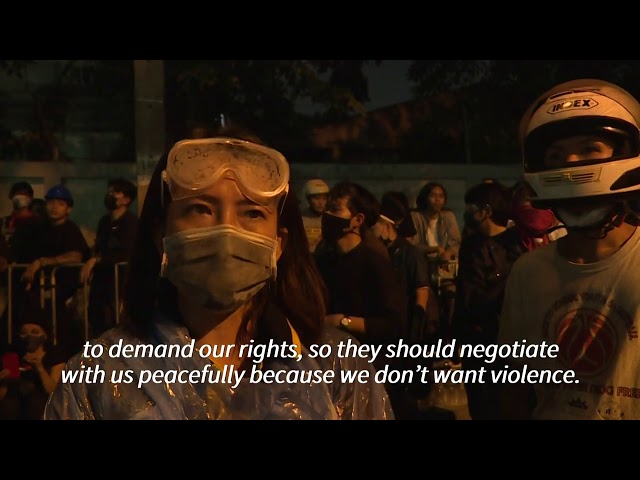 Thai police on Tuesday, November 17, fired water cannon and tear gas on pro-democracy protesters attempting to get close to parliament, where lawmakers were debating possible changes to the military-scripted constitution.

Thailand has seen months of student-led demonstrations demanding reform to the constitution and monarchy, and for the current prime minister to quit.

Several thousand took to the streets around the parliament building Tuesday, where riot police had blocked off roads with concrete and barbed wire.

Some sheltered behind giant inflatable rubber ducks which protesters had planned to float along the river behind parliament as lawmakers debated inside.

“What are police thinking by firing water cannon at people? The police are serving a dictator,” one protest leader said over a loudspeaker.

At one point police were forced to retreat when protesters threw tear gas canisters back into their lines. Five people were taken to hospital for treatment, medical officials said.

Student-led rallies have rocked Thailand since July, demanding the removal of Prime Minister Prayut Chan-O-Cha – who took power in a 2014 coup – and reform of the military-scripted constitution.

Some in the movement have also called for reforms to the monarchy – a once-taboo subject – sending shockwaves through the Thai establishment.

As police and protesters clashed, lawmakers were considering whether to debate 7 possible constitutional amendments.

They include a proposal to replace the present military appointments in the Senate with directly elected representatives.

But any constitutional change in Thailand is expected to take a long time and the junta-appointed Senate is unlikely to vote itself out of power.

Protesters insisted they just wanted to listen to the parliamentary debate.

Several opposition lawmakers came out of parliament to observe the protest and try to urge the police not to crack down hard on demonstrators.

Taopipop Limjittrakorn, an MP from the pro-reform Move Forward Party said police were ignoring pleas to de-escalate the situation.

“Police should not be overly violent and threaten them,” he told reporters.

One group of protesters confronted several hundred ultra-royalist supporters who were staging their own rally, with the two sides throwing bottles and other objects at each other.

The royalists are against all proposals to change Thailand’s 2017 constitution, saying they would undermine the monarchy.

Parliament is expected to vote on Wednesday, November 18, on which constitutional amendments bills will be debated. – Rappler.com