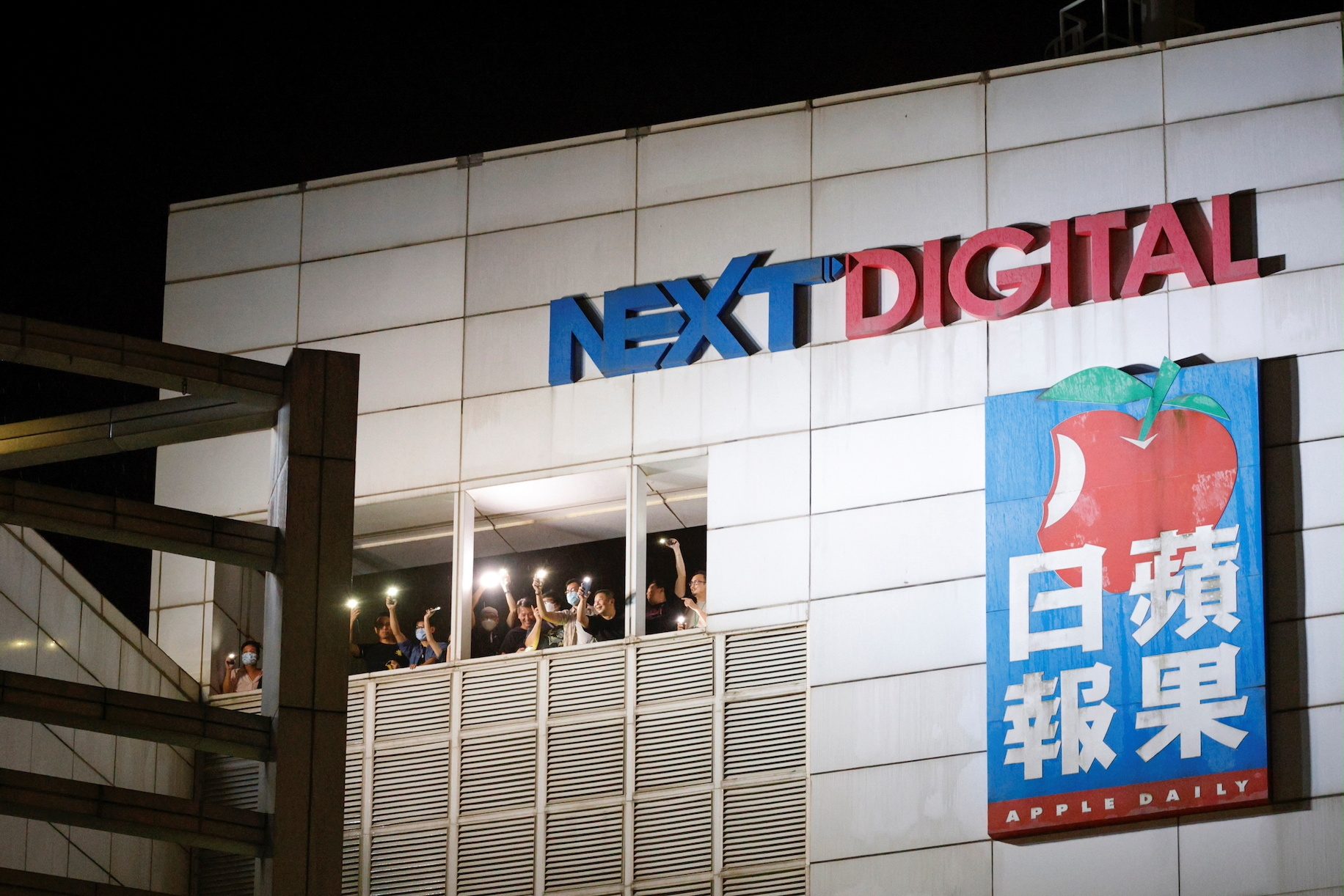 Journalists of Apple Daily wave to supporters at the headquarters of the Apple Daily newspaper, and its publisher Next Digital, after the announcement that the newspaper is folding its operations earlier, in Hong Kong, China June 23, 2021. REUTERS/Tyrone Siu

Following is a timeline of events leading up to this.

Apple Daily publishes its first edition. Founded by businessman Jimmy Lai, the tabloid daily, with its critical reporting on China, is a runaway commercial success.

“As long as readers choose us, support our journalism, and agree with our position, no matter how strong the pressure becomes, we will be able to stand tall,” the newspaper said in an editorial that day.

In 1994 Lai had called Chinese premier Li Peng the “son of a turtle egg” in a weekly magazine that he launched before the daily. The insult rankled Beijing.

On the handover of Hong Kong’s sovereignty from Britain to China, Apple Daily said it remained confident in Hong Kong’s future.

Lai meets US Vice President Mike Pence and Secretary of State Mike Pompeo in Washington to discuss the erosion of Hong Kong’s autonomy over a contentious extradition bill that sparked mass protests.

The China state-owned Global Times calls Lai a “traitor” for “brazen collusion” with the West to fuel the Hong Kong protests.

China directly imposes a national security law on Hong Kong without public consultation or city legislative involvement. The law sets out punishment for anything China considers subversion, secession, terrorism or collusion with foreign forces, of up to life in prison.

Hong Kong police arrest Lai, one of the most outspoken critics of Beijing, and eight others in a city-wide operation. Hundreds of police raid Lai’s Next Digital headquarters, where his flagship Apple Daily is produced and published. He is released on bail.

Lai is taken into custody and charged with fraud related to the lease of a building that houses Apple Daily.

Lai is charged under the security law on suspicion of colluding with foreign forces and endangering national security – partly from having sought sanctions against Hong Kong.

Lai is granted bail and is able to spend Christmas at home.

Lai resigns as chairman of Next Digital.

Lai is taken back into custody after a higher court overruled the bail decision following a wave of criticism by pro-Beijing voices who say he is a flight risk.

Thank you to all readers, subscribers, ad clients and Hong Kongers for 26 years of immense love and support.

“Defending freedom of speech is a dangerous job. It is our responsibility as journalists to seek justice,” Lai writes from prison.

Hong Kong police chief Chris Tang warns an unspecified newspaper for dividing society. He says “fake news” could be linked to national security and police may launch investigations into those who breach national security laws.

On the same day, Lai is jailed for 14 months for taking part in unauthorized assemblies during protests in August 2019.

Apple Daily‘s chief editor Ryan Law and its CEO reassure staff over rumours Hong Kong authorities would shut the newspaper before July 1 and arrest staff. July 1 is the centenary of the founding of the Chinese Communist Party.

Hong Kong authorities freeze assets belonging to Lai, including all shares in Next Digital – the first time a listed firm has been targeted by national security laws in the financial hub. Lai now faces three charges under the security law including collusion with a foreign country.

Reuters reports that Hong Kong’s security chief sent letters to Lai and branches of HSBC and Citibank in May, threatening jail of up to 7 years for any dealings with Lai’s accounts in the city.

Lai receives a second 14-month jail sentence for another protest.

Law and Cheung are charged with conspiracy to commit collusion with a foreign country, over unspecified articles in the paper calling for sanctions against Hong Kong and China. Authorities freeze HK$18 million ($2.3 million) of Apple‘s assets, making it difficult to pay wages and cover expenses.

Law and Cheung are denied bail by Judge Victor So.

Apple Daily marks its 26th anniversary. The paper says it has cash left for “a few weeks” of normal operations.

An adviser to Lai tells Reuters the paper will be forced to shut “in a matter of days”. Most staff resign, leaving a skeleton crew to keep going. Its board of directors call on authorities to unfreeze assets and say unless things change, the last edition will be published on June 26.

Police arrest an Apple Daily columnist on a national security charge. The paper brings forward its closing date, with one million copies of its last edition to run on June 24.

“Thank you to all readers, subscribers, ad clients and Hong Kongers for 26 years of immense love and support,” the paper writes. – Rappler.com