Facebook Twitter Copy URL
Copied
'In the absence of media, propaganda has become a new religion. It has its own priests, its own god, the President of Russia Vladimir Putin,' says Novaya Gazeta's editor-in-chief Dmitry Muratov

Illustrating the state of the media in Russia, Muratov said one cannot even say “war” to describe Russia’s actions on Ukraine without the risk of being fined as the Putin government only allows it to be called a “special military operation.” Muratov instead calls it “hell,” saying that the government’s own descriptions “does not reflect the scale of what is going on in Ukraine.”

“During this ‘hell,’ the people are left alone with propaganda. Media is dispersed. Media is banned. Media is designated as the enemy,” said Muratov.

“Honestly, you cannot write about anything anymore.”

The editor-in-chief of the newspaper Novaya Gazeta explained that media, even before the invasion began in February 2022, had been prohibited from analyzing military, political, and strategic moves by the government, space issues, and international treaties starting in September 2021. 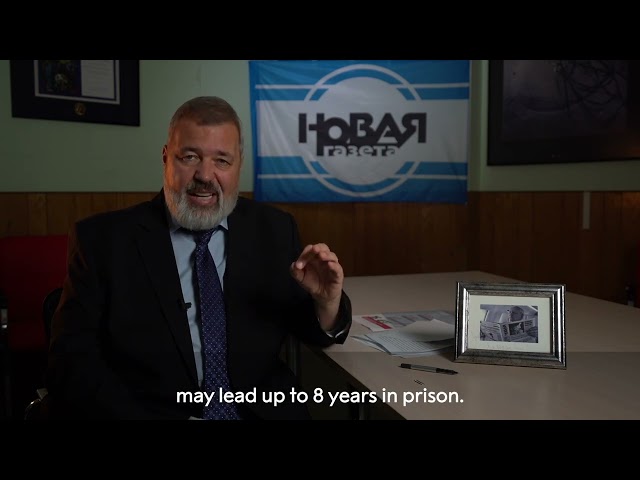 What Russia wants, according to Muratov, is “total government monopoly on people’s minds.”

Those that go against the government are meted with threats of fines and imprisonment. 138,000 websites have been blocked, with 7,000 on the grounds of censorship, including Novaya Gazeta. Facebook and Instagram have been blocked as well, while Russian social media platform VKontakte is now under total control of the government and the presidential administration.

Muratov’s colleague, Andrey Zayakin, is facing an 8-year prison sentence for sending 1000 rubles or 16.5 euros to opposition leader Alexei Navalny, whose organization had been declared as extremist. Another Russian journalist, Ivan Safronov, is facing a 24-year sentence for charges of treason. On Monday, September 5, Safronov received a 22-year sentence, a punishment that his supporters believe stem from Safronov’s expose on Russia’s planned sale of jet fighters to Egypt.

These are the ways that life has become even more extremely difficult for journalists in Russia.

Muratov said, “In the absence of media, propaganda has become a new religion. It has its own priests, its own god, the President of Russia Vladimir Putin. This religion has its own paradise too. A cheerful nuclear paradise…The world stands at the last line.

“We remember that the planet has often been saved by the anti-nuclear and anti-war movement. By the free media. The time has come, and I am appealing to you, to form an international foundation, ‘Media in Exile.’”

The said foundation would be for the benefit of journalists in exile, to assist them in continuing their job amid persecution from their home countries – a so-called Noah’s Ark for media, according to Muratov. He suggested it to be named after the journalist Anna Politkovskaya, whose 2006 murder remains unclear as to who ordered the killing. Muratov emphasized firmly that journalists, more than ever, need to be able to do their jobs.

“I want us now during this horrific tragedy in the center of Europe, to register every victim, every explosion, every torture to document the causes and the beginning of the tragedy. Journalists, keep doing this. Journalists need help.

[German filmmaker] Rainer W. Fassbinder once accurately noted ‘When you cannot change anything, you are still obliged to register everything.’ This is journalists’ duty and obligation.”

“And now we need media – both reliable media with strong fact-checking, and media of strong emotions. So that people’s grief would not turn into a system of insurance payments, so that hell would not become a routine, so that people would not get bored with front-page news, so that war briefing would become as customary as the weather forecast,” Muratov added.