ROLLING OUT BRADLEYS. US servicemen walk past a Bradley infantry fighting vehicle as they arrive for the joint US-Georgian exercise Noble Partner 2016 in Vaziani, Georgia, May 5, 2016.

KYIV, Ukraine – Ukrainian and Russian troops battled in eastern regions on Thursday, January 5, as Kyiv tried to push back occupying forces, while President Volodymyr Zelenskiy urged the West to provide his army with heavy tanks to boost their firepower.

The Ukrainian military said the Russians were focused on an offensive in the Bakhmut sector of the Donetsk region, but their attacks in the Avdiivka and Kupiansk sectors were unsuccessful.

The governor of neighboring Luhansk region said Ukrainian troops were recapturing areas there “step-by-step” but cautioned it was “not happening fast”.

Luhansk and Donetsk make up the Donbas region, Ukraine’s industrial heartland, parts of which were seized by Russian-backed proxies in 2014.

Russia declared Donetsk, Luhansk, Kherson and Zaporizhzhia regions as part of its territory in September after referendums condemned by Ukraine and Western countries. Russia does not fully control any of the four regions.

Bakhmut, which is now largely in ruins after months of battering by Russian artillery, is important because the Russian leadership wants a success to hold up to its public after a series of setbacks in the war.

It is located on a supply line between Donetsk and Luhansk. Gaining control of Bakhmut, with a pre-war population of 70,000-80,000 that has shrunk to close to 10,000, could give Russia a stepping stone to advance on two bigger cities – Kramatorsk and Sloviansk.

Fighting has been particularly tough there, with commanders on both sides describing it as a “meat grinder”.

Ukraine’s military said it estimated 800 Russian soldiers were killed in the past day, mostly in fighting in Donetsk. The figure – which would signify a huge loss of life for a single day – could not be independently confirmed.

The Luhansk governor, Serhiy Haidai, said he expected fighting to intensify across the eastern front as temperatures drop further and the ground freezes.

“Then the opportunity to use heavy equipment will open up,” he said.

Turkey’s President Tayyip Erdogan, meanwhile, spoke to Russian leader Vladmir Putin in a phone call and told him that peace efforts in the war should be supported by a unilateral ceasefire and a “vision for a fair solution”, according to the Turkish presidency.

Putin told Erdogan that Kyiv would have to accept the loss of territories claimed by Russia, the Kremlin said.

“Vladimir Putin reaffirmed Russia’s openness to a serious dialogue, provided that the Kiev authorities fulfill the well–known and repeatedly voiced requirements and take into account the new territorial realities,” the Kremlin said.

Erdogan and Putin have spoken repeatedly since the Russian invasion, but the prospects of a serious dialogue to end the war appear remote at this stage.

In Moscow, Patriarch Kirill, the head of the Russian Orthodox Church, called for both sides to observe a truce for the Orthodox Christmas over Friday and Saturday. Kyiv dismissed the move as a propaganda from a figure it sees as supporting Putin’s assault on Ukraine.

In his evening video address on Wednesday, Zelenskiy urged Western allies to provide his army with tanks and heavy weapons to combat the Russian forces.

Zelenskiy thanked Macron but said: “There is no rational reason why Ukraine has not yet been supplied with Western tanks.”

The Ukrainian leader also said his troops outside Bakhmut were inflicting numerous losses on their adversaries and Russia was building up its forces in the region.

Russian air, missile and rocket attacks on Bakhmut and two other cities in Donetsk – Kostiantynivka and Kurakhove – had caused an unspecified number of civilian casualties, Ukraine’s military said.

Russia denies targeting civilians in what it calls its special military operation in Ukraine.

Luhansk governor Haidai, asked on national television about the possibility of a Ukrainian counteroffensive in that region, said the cities of Rubizhne and Sievierodonetsk had been destroyed by Russian occupation forces and could no longer be used as strongholds.

“But we should not forget that there is also the defense line, which they (Russian proxies) have been building since 2014 the occupiers have very fortified positions there. Therefore, Russia was sending in extra troops, including conscripts, Haidai added. 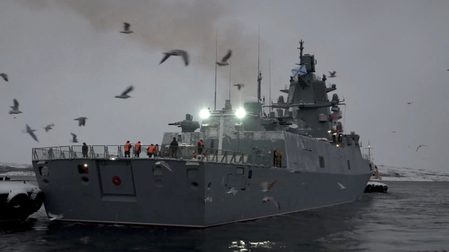 Reuters could not independently verify battlefield accounts from either side.

As the war grinds on, the Kyiv government has repeatedly asked Western allies for heavier fighting vehicles such as the Abrams and German-made Leopard tanks.

US President Joe Biden said on Wednesday the United States was considering sending lighter Bradley Fighting Vehicles to Ukraine. The Bradley has a powerful gun and has been a US Army staple to carry troops since the mid-1980s.

The United States is preparing another package of weapons, which could be announced in coming days on top of about $21.3 billion in security assistance so far to Ukraine.

The United States has increased the capability of the weapons it has sent.

During a visit by Zelenskiy to Washington last month, the United States pledged to send the Patriot missile system to repel Russian missile and drone attacks.

Russia invaded on February 24, citing threats to its security and a need to protect Russian speakers. Ukraine and its allies accuse Russia of an unprovoked war to seize territory.

Ukrainian economy ministry data on Thursday showed the country suffered its sharpest economic decline in more than 30 years in 2022 because of the war – a 30.4% drop in gross domestic product. The economy minister said foreign aid and the people’s “unbreakable spirit” helped prevent a worse scenario. – Rappler.com