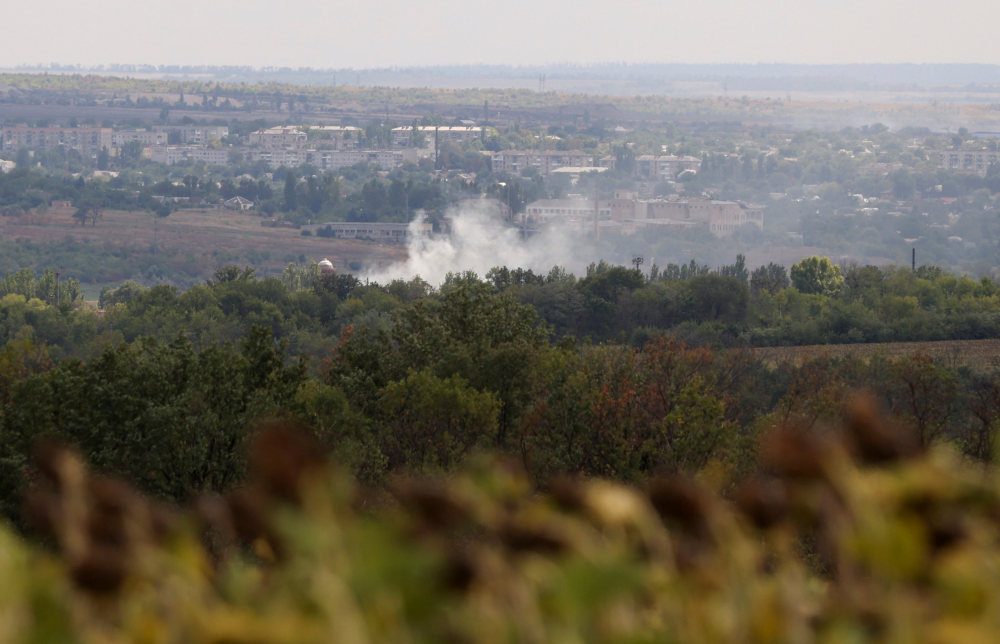 KYIV, Ukraine – Ukraine made its boldest claim yet of success on the battlefield in its week-old counter-offensive against Russian forces in the south, while European markets reopened on Monday, September 5, in free-fall after Russia kept its main gas pipeline to Germany shut.

After days of declining to give details about their new offensive, Ukrainian officials posted an image online of three soldiers raising a flag over a town in Kherson province, a southern region occupied by Russia since the war’s early days.

The image of the flag being fixed to a pole on a rooftop, purportedly in Vysokopyllya in the north of Kherson, was released as President Volodymyr Zelenskiy announced that Ukrainian forces had captured two towns in the south and one in the east. In an overnight address, he did not identify the locations.

After months of enduring punishing Russian artillery assaults in the east, Ukraine has at last begun its long-awaited counter-attack, its biggest since it drove Russian forces away from the outskirts of Kyiv in March.

Ukraine had kept most details of its new campaign under wraps so far, banning journalists from the frontline and offering little commentary in public, saying this was needed to preserve tactical surprise. Russia has publicly said that it has repelled assaults in Kherson.

In a rare acknowledgment from the Russian side that the Ukrainian counter-offensive was spoiling Moscow’s plans for territory it has seized, TASS news agency quoted a Moscow-installed official in Kherson as saying plans for a referendum to annex the region to Russia had been put on hold due to the security situation.

Mark Hertling, a retired former commander of US ground forces in Europe, said Kyiv’s aim appeared to be to trap thousands of Russian troops on the east bank of the vast Dnipro River, destroying bridges the Russians now use for supplies and would need to escape.

Russia had left “a force in Kherson, with a river at their back & limited supply lines”, and Ukraine was hitting them with “precision weapons, confusing a RU force that already has very low morale and poor leadership,” Hertling tweeted.

Zelenskiy’s announcement that a town had been captured in the east was also notable, a suggestion Ukraine was taking advantage of pressure in the south to try to reverse some of the gains Russia made elsewhere in recent months.

In his evening address on Sunday, Zelenskiy tempered his announcements of success with a warning to European countries that they could face a cold winter.

Moscow blames Western sanctions it says have interfered with repairs of equipment for forcing it to halt the flow of gas through Nord Stream 1, its main pipeline to Germany. Russia was due to reopen the pipeline on Saturday but has announced that it will stay shut indefinitely.

“Problems with gas supply arose because of the sanctions imposed on our country by Western states, including Germany and Britain,” Kremlin spokesman Dmitry Peskov said on Monday.

European countries call the gas cut-off blackmail. They say they are finding alternative sources of gas and are already ahead of targets in filling up storage tanks for winter.

Countries led by Germany have rolled out multi-billion euro packages of support for consumers and businesses, which last week helped drive European gas prices back down sharply from record highs.

But the weekend news about Nord Stream’s extended shutdown sent prices soaring once again on Monday, with the main European benchmark up by around a quarter, bringing fears of a bleak winter for consumers and businesses across the continent.

Germany’s DAX share index was down well over 2%, the Euro sank below 99 US cents for the first time in decades, and a new prime minister taking over in Britain would find the pound cratering to mid-1980s levels.

Speaking shortly beforehand, Kremlin spokesman Peskov was scathing about Truss, saying it was hard to imagine relations getting any worse, but that a worsening could not be ruled out, given what he called anti-Russian rhetoric from Britain.

“I don’t think that we can hope for anything positive,” he said.

Peskov also said Moscow planned to retaliate for the latest Western move: a proposed cap on the price of Russian oil exports from December designed to reduce Moscow’s main source of income.

In Russia, which has effectively banned all independent media since President Vladimir Putin launched his “special military operation” in February, a judge revoked the license of stalwart liberal newspaper Novaya Gazeta, one of the last unofficial voices.

The ruling was “a political hit job, without the slightest legal basis”, said its editor, Dmitry Muratov, who won last year’s Nobel Peace Prize for the paper’s fight for free speech.

Novaya Gazeta was founded 30 years ago with Nobel Peace Prize money won by the previous Russian laureate – former Soviet leader Mikhail Gorbachev, who was buried at the weekend. Putin declined to attend his funeral, a final symbolic snub of the man who presided over the breakup of the Soviet Union, when Ukraine was the most populous of 14 states to gain independence from Moscow.

With fighting shifting to southern Ukraine, international attention has focused in recent weeks on the Zaporizhzhia nuclear power station, captured by Russia but still operated by Ukrainian engineers and hooked to Ukraine’s power grid.

Both sides accuse each other of risking nuclear catastrophe by shelling near the plant. Russia has resisted international pleas to withdraw its forces from the facility and demilitarise the area.