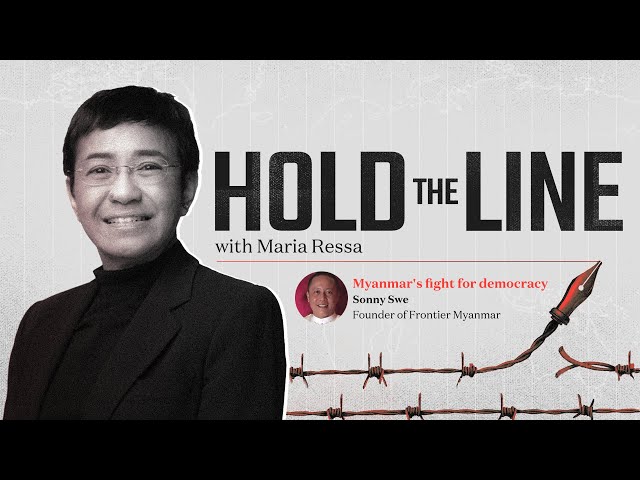 Facebook Twitter Copy URL
Copied
In Rappler's new show #HoldTheLine, Maria Ressa talks to journalist Sonny Swe on why he keeps speaking truth to power even after spending nearly 8 and a half years in jail

#HoldTheLine is a brand new interview series featuring people who fought and won their individual battles for truth-telling, integrity, and values. The series aims to show how people find and define the line that they fight for (and which ultimately determines who they are); what they fight for; and how they find the purpose for their life’s work.

In this show, Maria Ressa interviews people from around the world who continuously #HoldTheLine in their professional lives as journalists, documentary filmmakers, directors, and artists.

For the first episode, Maria Ressa interviews Sonny Swe, founder of Frontier Myanmar, which he established 2 years after being released from prison. He served 8 years of his 14 year sentence for bypassing censorship laws as a co-founder of the Myanmar Times.

This week, all eyes are on Myanmar, as tens of thousands of people storm the streets to peacefully protest the coup that happened early this month. Sonny Swe expresses his sentiments in this #HoldtheLine conversation, “I feel lost, our democracy is only 10 years old, it’s very fragile. It’s too young to die. The people of Myanmar don’t deserve this and I am worried about press freedom.”

In this interview, you can find out what makes Sonny persist as a journalist, what he is worried about, and what he thinks will happen. “People are just out to reclaim democracy” he says, but despite this, the threat against a free press is still very palpable. With an internet shut down, fake news still managed to spread fast via SMS creating confusion in the public.

After imprisonment, Sonny Swe only became stronger. “I didn’t have a chance to defend myself,” he said. (READ: Myanmar journalist Sonny Swe: Our democracy is ‘too young to die’)

In a special hearing where he didn’t have a lawyer, the decision was made and he was quickly sent to prison. When asked why it was personal for him to pursue journalism even after that experience, he said “It angered me that I couldn’t defend myself with the truth.”

He continues his work with Frontier Myanmar and says he is proud that he is able to this kind of work. He understands that the stakes are high but he believes that people have the right to information, to understand what’s going on.

This #HoldtheLine episode was recorded on February 8, 1pm (PHT) just a day after internet was restored in Myanmar. After the interview, Rappler+ members were able to have a private live discussion with Sonny where they could ask him off the record questions. – Rappler.com