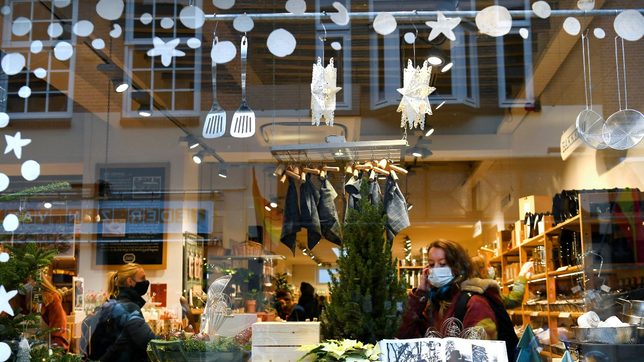 OMICRON. This file photo swhos people doing their Christmas shopping before the Dutch government announced a u2018strictu2019 Christmas lockdown to curb the spread of theu00a0Omicronu00a0coronavirus variant, in the city center of Nijmegen, Netherlands on December 18, 2021.

Facebook Twitter Copy URL
Copied
The World Health Organization says the number of Omicron cases is doubling in 1.5 to 3 days in areas with community transmission

LONDON, United Kingdom – The Netherlands went into lockdown on Sunday, December 19, and the possibility of more COVID-19 restrictions over the Christmas and New Year period loomed over several European countries as the Omicron coronavirus variant spreads quickly.

He described Omicron as “raging through the world,” and said travelling will increase the risk of infection even among vaccinated people.

Dutch urban centers were largely deserted as the country began a snap lockdown that left people’s Christmas plans in disarray.

Prime Minister Mark Rutte announced the shutdown on Saturday evening, December 18, ordering the closure of all but essential stores, as well as restaurants, hairdressers, gyms, museums and other public places from Sunday until at least January 14.

Omicron, a very contagious variant first detected last month in southern Africa and Hong Kong, has raced around the globe and been reported in 89 countries, the World Health Organization said on Saturday, December 18.

The number of Omicron cases is doubling in 1.5 to 3 days in areas with community transmission, the WHO said, noting that much is still not known about the variant, including the severity of the illness it causes.

While the Netherlands took the plunge and shut down much of public life to prevent its healthcare system from being overwhelmed by an expected surge in cases, several other European governments are considering more curbs – at a time when people are normally spending money on shopping, entertainment and travel.

Britain reported a surge in cases of Omicron on Saturday, with 25,000 recorded so far. Government advisors said this could be the tip of the iceberg and health minister Sajid Javid declined on Sunday to rule out the chance of further COVID-19 restrictions before Christmas.

Javid said the government was taking the “sobering” advice of its scientists seriously, was watching the data on an “almost hourly basis” and would balance that against the broader impact of restrictions on areas such as businesses and education.

Prime Minister Boris Johnson is reeling after a series of scandals and missteps, and more than 100 of his own Conservative lawmakers this week voted against the government’s latest measures to tackle COVID-19.

Javid said Johnson was not too politically weak to bring in further curbs if necessary.

In Italy, the government is considering new measures to avoid a surge in infections during the holiday period, local newspapers reported on Sunday.

After holding a meeting with ministers on December 23, Prime Minister Mario Draghi could mandate that people who have been vaccinated also show a negative test to access crowded places, including discos and stadiums, daily Corriere della Sera reported. – Rappler.com