Facebook Twitter Copy URL
Copied
Jerusalem has been at the heart of decades of Israeli-Palestinian conflict. Israel sees all of Jerusalem as its eternal and indivisible capital while Palestinians want the eastern section as capital of their future state.

JERUSALEM – An annual “flag” march by Israeli nationalists through Jerusalem’s Old City this Sunday, May 29, could prove to be a dangerous test of the Islamist Hamas group’s assertiveness in opposing Israeli actions in the contested city.

The march celebrates Israel’s capture of the Old City in the 1967 Middle East War and passes through the narrow streets of its Muslim quarter.

Legal efforts to ban the event have failed, with supporters arguing that it was a legitimate festival marking an extraordinary moment in Jewish history.

For many Palestinians, the parade is a blatant provocation and a violation of one of the few places in the city, increasingly hemmed in by Jewish development and settlement, which retains a strong Arab flavor.

Leaders of Hamas, which is seeking to impose new “rules” over Jerusalem, say they are ready for renewed violence on Sunday if the Israeli government does not keep the march out of Muslim neighborhoods.

“They can avoid a war and escalation if they stop this mad (march),” Bassem Naim, a senior Hamas official, told Reuters in Gaza, the Palestinian enclave controlled by Hamas.

For Hamas the march is also a religious affront, given the Old City is home to the Al-Aqsa Mosque compound, the third holiest site in Islam, which Jews also revere as the Temple Mount – a vestige of their faith’s two ancient temples.

In recent years Hamas has cast itself as a defender of Muslim Jerusalem. Last year it fired rockets into Israel minutes after the march kicked off, triggering an 11-day war that killed at least 250 Palestinians and 13 people in Israel.

Israeli Prime Minister Naftali Bennett on Friday supported the planned route of the march, which is set to enter Damascus Gate and pass through the Muslim quarter, and shrugged off calls from some members of his coalition to avoid sensitive areas. 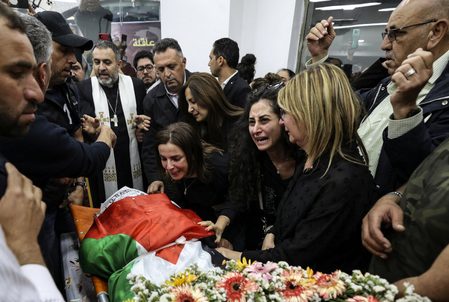 His office said the parade, as always, would not go onto the Temple Mount. It added that the situation would be reviewed over the coming 48 hours.

Jerusalem has been at the heart of decades of Israeli-Palestinian conflict. Israel sees all of Jerusalem as its eternal and indivisible capital while Palestinians want the eastern section as capital of their future state.

Hamas, deemed a terrorist organization by many Western governments, sees all of modern-day Israel as occupied.

“For Israel, Jerusalem is off the table, for the Palestinians it is the table,” said Daniel Seidemann, an Israeli lawyer and campaigner for Palestinian rights in East Jerusalem.

Tensions have been rising in the city for weeks.

Repeated clashes took place between Palestinians and Israeli police in the Al-Aqsa compound in April, during the holy month of Ramadan, with Muslims angered by rising numbers of Jewish visitors to the mosque esplanade.

On one night during Ramadan, youths managed to smuggle into the site a gigantic banner showing a Hamas fighter, which they hung up in front of the gilded seventh-century Dome of the Rock.

“A few years ago that would have been unthinkable. It shows that Hamas’s defense of Jerusalem is resonating and that support for them is growing,” a senior Western diplomat said.

An influential Israeli lawmaker from the ruling coalition said it was too risky to let Sunday’s march continue in its present form given the tensions.

“We should not, with our own hands, cause a religious war here or all kinds of provocations that are liable to ignite the Middle East,” Ram Ben-Barak told Kan radio.

However, calls for a rethink have been scorned by the organizers, who deny that the procession, which often features anti-Arab chanting, is a provocation.

“It’s all about celebration, of the liberation of Jerusalem and the return of the Jewish people to the Jewish city, Jerusalem,” said Arieh King, a Jerusalem deputy mayor. – Rappler.com