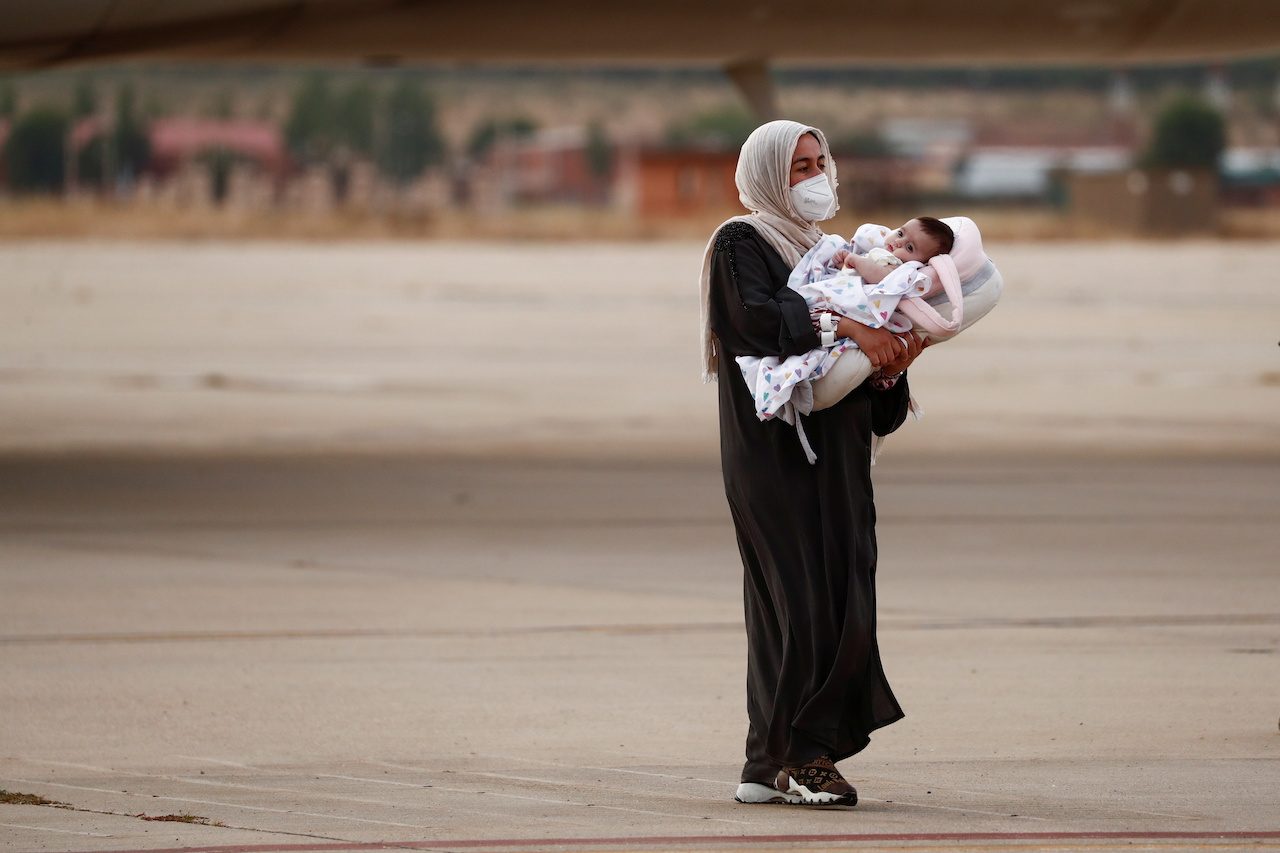 BABY. An Afghan woman who has been evacuated from Kabul carries a child as she arrives at Torrejon Air Base in Torrejon de Ardoz, outside Madrid, Spain, August 24, 2021.

President Joe Biden on Tuesday, August 24, stuck by his plan to remove the nearly 6,000 US troops from Afghanistan by the end of August, contingent on whether the Taliban cooperates to allow the evacuation of more Americans and their Afghan allies.

Biden announced a plan in April to withdraw 2,500 US troops who were still in Afghanistan after a 20–year war, but was forced to send thousands more back to evacuate those at risk as the US–backed government and military quickly collapsed.

The chaotic and perilous evacuation from Kabul airport that ensued has unleashed a wave of criticism and presented Biden with his biggest crisis since taking office in January.

US officials say the troop withdrawal must begin no later than Friday to be completed by August 31 and it will take several days. The troops at Kabul airport include Marines and paratroopers.

As they pack up their equipment and withdraw, the pace of evacuations by US and allied forces – which reached 20,000 a day this week – will inevitably slow.

How many people can be evacuated by the deadline?

Since August 14, more than 70,000 people, including American citizens, NATO personnel, and Afghans at risk, have been evacuated from Kabul, Biden said on Tuesday. Biden has said the United States will evacuate any US citizen who wants to leave and officials have said they will evacuate as many at–risk Afghans as possible.

Pentagon spokesman John Kirby said the Pentagon believes it has the ability to get all Americans who want to leave out by August 31 and US officials say 4,000 Americans have been evacuated so far, but they do not know how many are still in the country, as not all registered with the US embassy.

The Pentagon has also committed to evacuate the roughly 500 Afghan soldiers who have been helping to protect Kabul airport.

Despite the current pace of evacuation, which has involved dozens of military transport planes from the United States and around the world, many thousands of Afghans who officials and advocacy groups say face potential retribution at the hands of the Taliban, will not be able to leave by Biden’s deadline.

‘Was it worth it?’: Pain and anger inside Pentagon after Afghanistan crumbles What happens to those left behind?

The Association of Wartime Allies, a refugee resettlement group, estimates 250,000 Afghans, including interpreters and drivers and other workers who helped the US effort, need to be evacuated, but only 62,000 have left since July.

The State Department says the aim is to help at-risk Afghans leave even after the troop withdrawal and that Washington will put pressure on the Taliban to ensure they are able to do so.

“What does not end when the military mission ends is our commitment to at-risk Afghans,” State Department spokesman Ned Price said on Monday. “We will hold the Taliban to this; the rest of the world will as well – that individuals who seek to leave after the US military is gone will have an opportunity to do so.”

What leverage does the United States have?

One of the biggest questions the Biden administration and like-minded governments face is whether to recognize the government the Taliban establishes.

This would have important consequences, including as to whether the Taliban will have access to the foreign aid relied upon by previous Afghan governments.

A 2020 agreement signed by the former Trump administration explicitly states that the Taliban “is not recognized by the United States as a state,” but there are already signs Washington will have to talk to the Islamist militant group on some issues, such as counter-terrorism.

US officials say the Taliban opposes groups like Islamic State and US diplomats and commanders have been in contact with Taliban officials throughout the evacuation.

What about the humanitarian crisis?

The United States, its allies, and the United Nations will have to decide how to deal with a looming humanitarian disaster.

The UN says more than 18 million people – over half Afghanistan’s population – require aid and half of all Afghan children under the age of five already suffer from acute malnutrition amid the second drought in four years.

The World Health Organization says it has only enough supplies in Afghanistan to last a week after deliveries were blocked by restrictions at Kabul airport and it is concerned the upheaval will push up coronavirus infections.

The Taliban have assured the UN it can pursue humanitarian work, but the world body will insist on women’s rights and access to all civilians. – Rappler.com