Biden pledges to be president ‘for all Americans’ (FILES) In this file photo taken on July 28, 2020 US Democratic presidential candidate and former Vice President Joe Biden smiles as he speaks during a campaign event at the William "Hicks" Anderson Community Center in Wilmington, Delaware. - Joe Biden has won the US presidency over Donald Trump, TV networks projected on November 7, 2020, a victory sealed after the Democrat claimed several key battleground states won by the Republican incumbent in 2016. CNN, NBC News and CBS News called the race in his favor, after projecting he had won the decisive state of Pennsylvania. His running mate, US Senator Kamala Harris, has become the first woman US Vice President elected to the office. (Photo by ANDREW CABALLERO-REYNOLDS / AFP)

Facebook Twitter Copy URL
Copied
'The work ahead of us will be hard, but I promise you this: I will be a President for all Americans – whether you voted for me or not,' says Joe Biden

Democrat Joe Biden on Saturday, November 7 (Sunday, November 8, Manila time), pledged to be a “president for all Americans,” after US networks projected he has defeated Republican incumbent Donald Trump in their bitterly contested election.

“The work ahead of us will be hard, but I promise you this: I will be a President for all Americans – whether you voted for me or not,” the 77-year-old former vice president said in a tweet.

“With the campaign over, it’s time to put the anger and the harsh rhetoric behind us and come together as a nation,” he said in a separate statement.

“It’s time for America to unite. And to heal.” 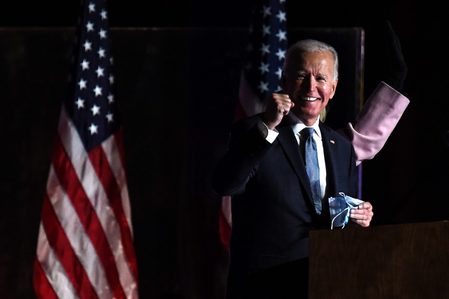 The result of the November 3 election had been on a razor’s edge for days as a handful of battleground states including Pennsylvania, Georgia, Arizona, and Nevada remained uncalled.

But with all major US networks projecting that Biden won Pennsylvania, the Democrat now stands at 273 electoral votes, beyond the magic majority number of 270 needed in the Electoral College that determines the president.

“We did it. We did it Joe,” his running mate Kamala Harris – set to become the first woman vice president – told Biden in a phone call, according to a short video clip she posted to Twitter.

“You’re going to be the next president of the United States.”

Harris, a US senator whose historic win means she also becomes the first woman of color and first Asian-American in the position, also said in a separate tweet that the election is “about so much more than @JoeBiden or me. It’s about the soul of America and our willingness to fight for it.” Residents of the US capital Washington were seen flooding into the streets in celebration, while Democratic lawmakers including House Speaker Nancy Pelosi offered their congratulations and spoke of “a new day” in America after four tumultuous years of Trump. – Rappler.com