In Canada, Filipino health worker among first to get historic COVID-19 vaccine 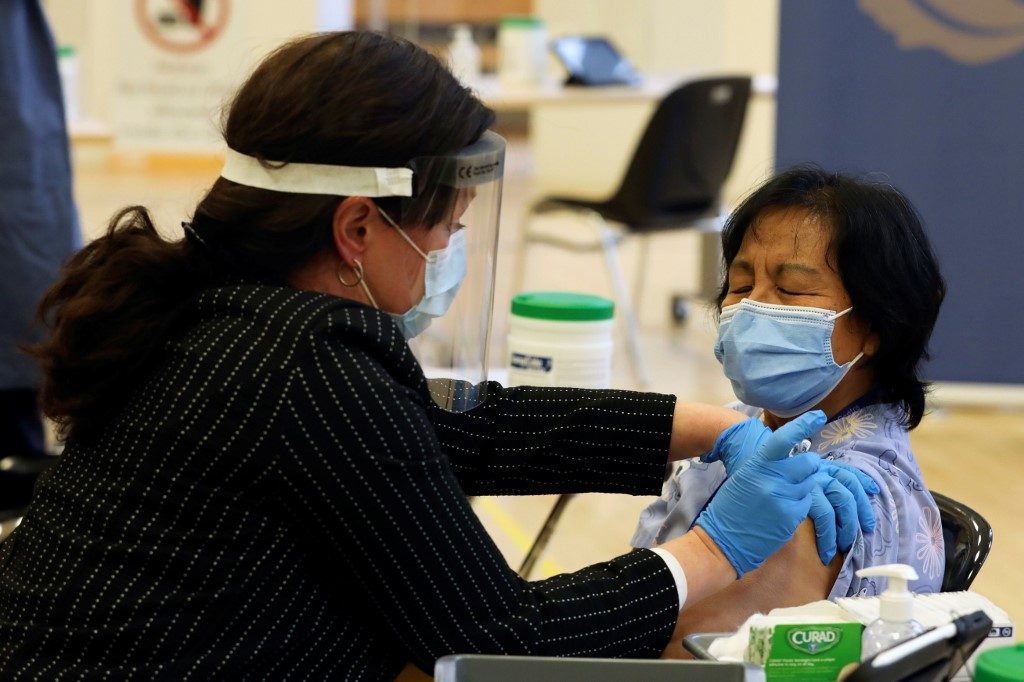 MILESTONE. A healthcare worker administers a Pfizer-BioNTEch COVID-19 vaccine to a patient at The Michener Institute, in Toronto, Canada on December 14, 2020.

A Filipino long-term care worker was among the first in Canada to receive the historic COVID-19 vaccine on Tuesday, December 15, marking the start of the country’s inoculation campaign.

Anita Quidangen, a personal support worker at the Rekai Centre nursing home in Ontario, Toronto, rolled up her sleeve to become one of 5 frontline health workers to get a dose of the Pfizer-BioNTech shot – the world’s first approved and fully-tested vaccine.

Filipino-Canadian news site Omni Filipino reported that Quidangen has been working as a personal support worker at the Rekai Centre at Sherbourne Place since it opened in 1988.

Applause filled the room at the vaccination site in the University Health Network as Quidangen smiled behind her mask after receiving her first dose of the vaccine.

“It’s an honor, thank you very much,” Quidangen told the Toronto Star after receiving the shot. “I’ll continue to do my job as a PSW (personal support worker).”

“It was amazing to watch Anita Quidangen…receive the vaccine. Thank you Anita for rolling up your sleeves to protect our province,” tweeted Doug Ford, Premier of Ontario.

Canada is among the first countries to mount a mass immunization campaign against COVID-19. The rollout of the program in the country takes place alongside similar campaigns in the United States, United Kingdom, and Bahrain.

Keenan was the first person in the world to get the vaccine. Like in the UK, many Filipinos form part of Canada’s health system and serve as frontliners during the pandemic. A 2017 study from the Canadian Health Institute indicated that as of 2016, nurses from the Philippines made up 34.4% of the 8.1% of international nurses in the country.

Ontario, Canada’s most populous province and one of the hardest hit by the pandemic, counted 1,940 new cases and 23 deaths on Monday, December 14.

Canada is set to receive up to 249,000 doses of the Pfizer-BioNTech vaccine by the end of the month, while authorities expect to receive a total of 6 million doses of Pfizer and Moderna vaccines – the latter currently awaiting approval – in the first quarter of 2021. This would make it possible to vaccinate 3 million people with two doses.

Prime Minister Justin Trudeau has promised that most Canadians should be vaccinated by September 2021. A study by the People’s Vaccine Alliance – which includes Amnesty International, Oxfam, and Global Justice – found that the country ordered enough vaccines to protect each Canadian 5 times.  – with reports from Agency France-Presse/Rappler.com