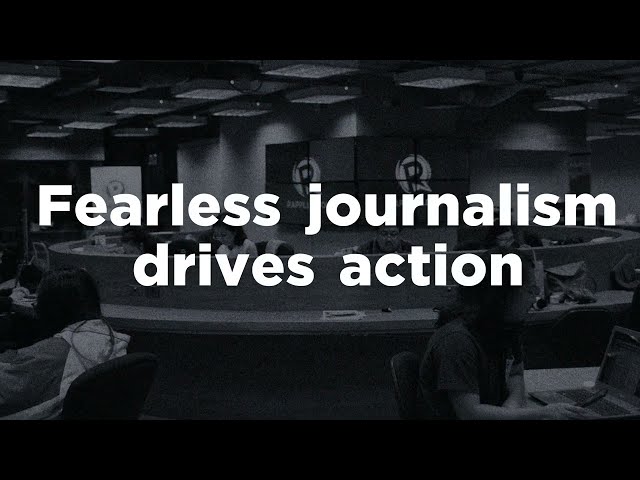 On December 26, 2021, Rappler CEO and Nobel Laureate Maria Ressa was attacked on Twitter for sharing a Rappler story about Ferdinand Marcos Jr. and how his father, using “the full machinery of the Philippine government in England,” tried to save him from flunking his uncompleted studies in Oxford University.

The vile, hateful, and personal attacks on Maria Ressa did not stop her from using these tweets as evidence of the disinformation networks that exist on social media. Rappler’s Data and Research team then studied and analyzed these recent attacks and found that they were done by freshly created Twitter accounts. Furthermore, these accounts were part of a network that made #LabanMarcos trend the day before the Commission on Elections’ decision on Marcos Jr.’s disqualification case.

Rappler’s investigation eventually led to the take down of over 300 accounts from the Marcos network on Twitter. Despite the attacks, Rappler did not retreat into silence and remained fearless in pursuing the story. This paved the way for social media platforms like Twitter to act and respond to online disinformation.

Understanding disinformation networks and the context that surrounds them is an important part of Rappler’s investigative and data journalism.

As Rappler’s Head of Data and Innovation, Don Kevin Hapal says: “Those who have been following our coverage would know that Rappler has been invested in studying disinformation since 2015. And just last year, we decided to step this up a notch and built a dedicated Digital Forensics Team. Why is this move important? Among many other reasons, we’re at the advent of a make-or-break election: a pivotal moment in history that will decide our fate as a nation. Whether we’ll continue to live in this climate of hate, lies, and impunity will be largely determined by the leaders we elect. With the stories we’ll produce in the next few months, we hope you get to know your potential leaders better – their truths and untruths.”

Support Rappler’s fearless journalism by joining Rappler+. Click on the Join Rappler+ button on the top right of this page or sign-up below:

The madness of December